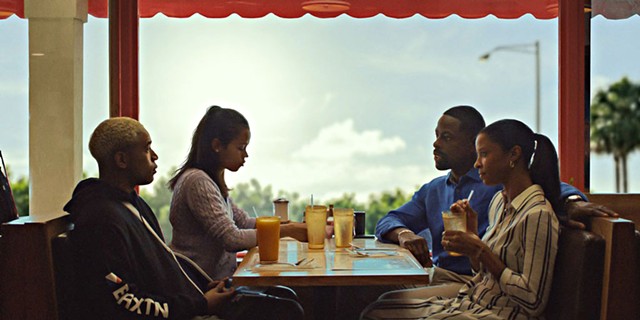 In his latest, the filmmaker experiments with a more impressionistic style to tell another story hinging on family dynamics and addiction issues. The more Shults addresses these matters, the less he has to say.

What Waves lacks in coherent, compelling narrative, the writer-director attempts to make up for with camera acrobatics, thundering music cues and strobe-y explosions of color. It's like he watched Harmony Korine's Spring Breakers several thousand times to prepare for making a family melodrama. The pyrotechnics initially prove distracting. Eventually they just annoy.

To make matters more self-consciously experimental, Waves was constructed as two movies in one. Both focus on an upper-middle-class black family in Florida. The first follows 17-year-old Tyler, played by Kelvin Harrison Jr. His is a tragic, if not entirely credible, arc.

Tyler is a star wrestler with a vivacious girlfriend (Alexa Demie). He also has a secret. His doctor has informed him he's sustained a dangerous muscle tear requiring surgery and advised him to refrain from all physical activity. For reasons never explained, Tyler instead works out strenuously with his drill sergeant of a father (Sterling K. Brown), continues to compete and washes lots of Oxy down with vodka to dull the pain. These and other questionable choices result in the aforementioned tragedy.

Among the reasons this part of the story strains credulity: The boy's a minor. A family doctor diagnoses a "very serious" injury but doesn't mention it to the family? And the Oxy? It's Dad's (he has a knee problem). There's even a scene in which Dad asks his wife (Renée Elise Goldsberry) whether she took pills from his stash; when she denies doing so, he drops the issue. Huh? Credulity-straining-est of all, no reason is offered for why Tyler doesn't simply tell his parents he needs to stop wrestling. He's that afraid of his old man? This isn't a Tennessee Williams play.

The second section is less angsty. It features Tyler's sister, Emily, played by Taylor Russell. She falls for a sweet-natured white schoolmate named Luke (Lucas Hedges), and, this being a Shults film, the two bond over a visit to the deathbed of Luke's father. Who — are you sitting down? — has a history of addiction issues. Luke knows how to show a girl a good time.

Waves did not need to be two hours and 15 minutes long. While the movie includes a few interesting performances and the occasional memorable moment, its director indulges an impulse to go all kitchen sink. It's as though Shults got the idea this was going to be his last chance to make a film, so he needed to throw in every tangential thought or observation he's ever had about anything. The story goes down an awful lot of dead ends before arriving at its hopeful, if ambiguous, closing sequence.

Some in the black community have taken issue with the white filmmaker's appropriation of the African American experience. It's not for me to say whether what he's done is right or valid. I only know I sat through considerable sound and fury. You know what that usually signifies.

The original print version of this article was headlined "Waves"