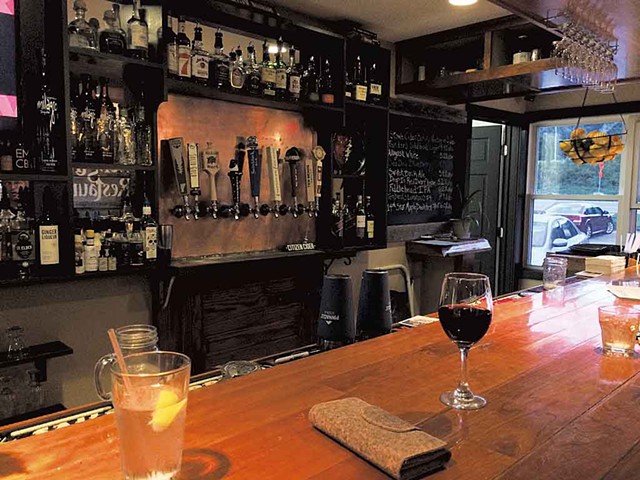 In the former Long Trail Tavern building, which most recently held Hogback Snacks, Moog's Joint was hopping on its second evening open in late August. Owner and Johnson resident Tom Moog, who also owns 8-year-old Moog's Place in Morrisville, buzzed around the restaurant, bar and live-music venue chatting up customers. A mix of Lamoille County musicians had played the house piano the night before; that Friday, Moog projected a live-streamed Phish concert.

Locals seemed thrilled that the place was open. "It's the most exciting thing in Johnson since Maplefields reopened and gave out free coffee," deadpanned Johnsonite Ray Kania.

If locals still have free gas station coffee from 2017 on their minds, that's an indication of the state of Johnson. With the notable exception of Downtown Pizzeria & Pub, the college town has lacked nightlife and dining options for some time.

Now comes Moog's, which is open nightly until 1 or 2 a.m. and serves elevated pub food. Crab cakes, mussel chowder and burgers grace the menu, developed by Matt LeBlanc, who was previously chef at Harrison's Restaurant and Bar in Stowe. Vermont microbrews and inventive cocktails make up the drink list; Don Horrigan, formerly of Edson Hill in Stowe and the Scale House in Hardwick, bartends.

Moog said he hopes his second restaurant will help "create new ideas and new events that help Johnson and bring the town together." He plans to host local and touring musicians "just about every night," he added, and is open to a variety of genres. "I'd love a punk show," he said. "And let's not forget about hip-hop."

The original print version of this article was headlined "Fresh Joint"