With “Empty Stages,” the Champlain Trio Illustrates Performance in a Pandemic 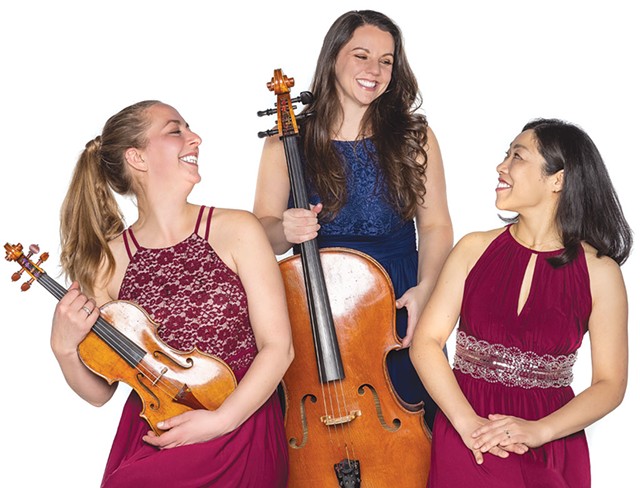 Six pandemic-endangered performance venues are the settings for "Empty Stages: Performances and Stories of Resilience," a mini-documentary series created earlier this year by Vermont filmmaker Jay Craven. The riveting performers on those stages are the members of the Champlain Trio, a year-old Vermont chamber group.

In one moment that occurs in the final episode, pianist Hiromi Fukuda, seen in profile, cuts a glance toward cellist Emily Taubl and violinist Letitia Quante. They're playing the second movement of Felix Mendelssohn's Piano Trio No. 1 in D Minor. As the music slows, all three musicians, absorbed in the emotion of the piece, move in unison toward the next phrase.

The camera captures their communication so intimately, it almost feels live.

"Empty Stages," the trio's pandemic project, was filmed at six very different venues around the state. Vermont audiences can access all six 15-minute episodes by purchasing a ticket to the Champlain Trio's livestreamed concert on Saturday, May 22.

That concert takes place at the Highland Center for the Arts in Greensboro — featured in the first episode of "Empty Stages" — and opens with a discussion with Craven.

The unusual program will feature music by two composers born in the 1880s: Spaniard Joaquín Turina's Piano Trio No. 2 in B Minor and Croatian composer Dora Pejaevi's Piano Trio in C Major.

Classical music fans have had to settle for a lot of virtual performances over the past year. "Empty Stages" is much more than that. At each venue, ranging from South Congregational Church in St. Johnsbury to the Flynn in Burlington, trio members talk with the directors, organizers and other behind-the-scenes workers about the impact of the pandemic or the importance of the arts in Vermont.

Then, without much formality, each episode segues into the unmasked trio performing a single movement of a piece in formal concert dress on the stage. No indication of what they're playing interrupts the camera work, which intersperses close-ups of finger work, facial expressions and communicative gestures with sweeping shots of the room's empty seats. The sound is almost studio quality.

The camera captures their communication so intimately, it almost feels live. tweet this

The members of the Champlain Trio began playing together just before the pandemic arrived, so the group became the musicians' "safety music bubble," as Quante put it during a Zoom call with all three members. After the cancellation of their inaugural concert, scheduled for March 2020 at a retirement community in Hanover, N.H., they self-produced four video concerts for the Wake Robin retirement community in Shelburne. That experience cemented their desire to formalize the collaboration, and they had adopted their trio name by the end.

When the Wake Robin project wrapped, Taubl said, "we were trying to think of ways to help with the impact of COVID on the arts. [We thought of] visiting venues that normally welcome us several times every year and discovering how they're coping."

The series name came from Quante, Taubl noted, who wondered, "What about all these empty stages?"

While some of the venues began offering online programming, Quante said, "gathering people together wasn't happening. They weren't getting that joy. I was worried about how they were feeling internally."

The women knew they wanted the project to be more than just a video performance series. Taubl looked online for a professional filmmaker, found Craven and emailed him out of the blue.

"We don't know anything about film; we just really hit a gold mine," Fukuda said.

Craven has been making films professionally since 1973, he told Seven Days during a phone call. Best known for his narrative films based on novels by the late Vermont author Howard Frank Mosher — including A Stranger in the Kingdom, Disappearances and Where the Rivers Flow North — he has also made half a dozen documentaries.

Craven receives about 20 unsolicited pitches per year, he said. "My family said, 'Don't do it,' because of the COVID risk," he recalled of Taubl's proposal. "But I felt we could manage it."

The limited size of the project — "Empty Stages" took just three months from conception to completion — allowed Craven to experiment with a crew of five rather than the 28 professionals and 35 students he normally has on set.

Also a classical music fan, Craven has presented many an ensemble as founding director of Catamount Arts in St. Johnsbury from 1975 to 1991 and through Kingdom County Presents since 2009. Classical musicians appear in several of his feature films, including Wetware, which flashes back to its main character's past as a classical pianist.

The filmmaker's sense of drama is evident in "Empty Stages": The series succeeds in the difficult task of making seated classical performers interesting to watch. Craven said he pushed his "fairly young crew ... to get closer to the finger work on keys, on cello. The idea was to try to bring it alive through getting inside the circle of performance."

The team did five takes of each performance and spliced them into one, led by cinematographer and editor Patrick Kennedy.

Some of the episodes focus on the musicians' training. All three studied at the Juilliard School in New York City. Beginning in 1998, Quante and Taubl — then ages 11 and 12, respectively — attended Juilliard's precollege program every Saturday for four years. They slightly overlapped with Fukuda, who is from a suburb of Tokyo. The pianist left Japan to earn her master's and doctor of musical arts degrees at Juilliard from 2001 to 2008.

All three women normally pursue busy careers involving lots of travel. Taubl, who lives in Burlington, teaches at the University of Vermont as an affiliate artist and is principal cellist of the Springfield Symphony Orchestra in Massachusetts. She also directs the Burlington-based Conservatory Audition Workshop, which prepares string students for auditions at elite music schools.

Fukuda, also a Burlington resident, is a faculty artist with the summertime Green Mountain Chamber Music Festival, teaches at Amherst College in Massachusetts and is a staff pianist at Juilliard.

Quante, a Vermont Symphony Orchestra violinist who lives in Underhill, appears with classical, opera and singing groups around the state and in New Hampshire.

Taubl pointed out that the pandemic's kibosh on out-of-state travel helped the ensemble coalesce. "This trio wouldn't exist if not for COVID, because we never would have been home enough to form it," she said.

Craven declared the trio "fabulous" — and perfectionists, he added.

"In one episode," the filmmaker recalled, "Hiromi believed that two notes played far apart from each other were wrong. Editing out a single note and replacing it ultimately proved to be impossible for us, but we spent 10 hours trying. They sent it out to a specialist. I came away with a greater appreciation for the degree of perfectionism in classical musicians."

The venues that showcase those musicians, and presenters such as Craven, face an unknown future. During the pandemic, Kingdom County Productions (the umbrella organization for filmmaking and performing arts series) received four times the amount of federal and state funding it typically gets, he said. But, Craven added, "We see the empty seats; how many people will come back, and when, and under what conditions?"

As Fukuda declared, "These organizations need feeding. We want them to be there for the next many, many years."

"Empty Stages: Performances and Stories of Resilience" documentary film series, available with purchase of tickets to Champlain Trio concert, Saturday, May 22, 7:30 p.m., livestreamed from Highland Center for the Arts in Greensboro. $25. champlaintrio.com, kingdomcounty.org