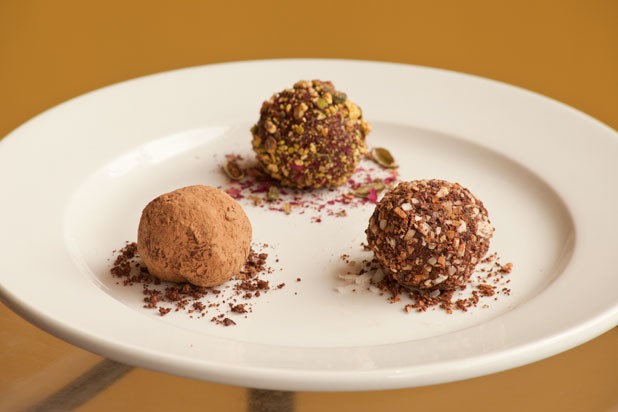 What happens to a Vermonter when he tries to leave the Dominican Republic with nothing but 20 kilos and a hunting knife in his bag? He’s detained — but only briefly, because the contents of the bag are pure cacao.

“I got held up in the back room, but pretty soon they were laughing at this crazy gringo going home and making chocolate,” says Matt Birong a day after his adventure with customs.

The chef-owner of 3 Squares in Vergennes was on his second journey to the DR to visit El Guineal, site of an 1100-acre preserve that currently includes about 25 acres devoted to growing cacao. Birong is an investor in the farm, which employs between 10 and 20 members of the high-altitude, rural community.

Though the food miles certainly don’t qualify the beans as locavore, Birong’s use of them is farm-to-table direct sourcing at its purest. He cut many of the pods from the tree himself before bringing the fermented, dried cacao home to use in a special menu for Vermont Restaurant Week. During that week — actually 10 days, April 26 to May 5 — Birong will roast, clean and process the beans and transform them into not just sweets such as flan and house truffles but also braises and crusts on savory dishes.

“You kind of have to stay inspired when you’re a chef. Stagnation is death — when you get bored, your menu and business get boring,” Birong says. And chocolate is inspiring him, big-time: “I’ve never had one single ingredient captivate me so much since I got involved in this last year,” he adds.

“This” is the farm Birong bought into last July. It’s part of the first private reserve in the Dominican Republic, a conservation project stretching over 20,000 acres of mountainous land, and it’s a tribute to an unlikely connection between landlocked Vermont and the Caribbean nation. Those locales are the summer and winter homes, respectively, of a rare bird called Bicknell’s Thrush.

With climate change and mercury deposits endangering the thrush’s mountain habitats, conservationists ramped up their efforts to establish a wintertime preserve for the bird.

Grant aid came from the U.S. Fish & Wildlife Service, among others. Vermont Center for Ecostudies (VCE) is in charge of the ornithological aspects.

The Adirondack-based Eddy Foundation purchased the property to create an ecological corridor, along with Jaime and Jesus Moreno, known as the Dominican Ben & Jerry for their 240-store ice cream brand, Helados Bon. In addition to funding the project and maintaining a hands-on presence at the preserve, the Morenos have debuted a flavor called Choco Maple, combining their local, organic chocolate and macadamias with Vermont maple. Sales will raise funds for Consorcio Ambiental Dominicano, a conservationist nongovernmental organization.

Charles Kerchner, a Vermont forest-carbon specialist and PhD candidate, is project coordinator of the Two Worlds—One Bird alliance, organizing everything from grant writing to construction of a farmhouse in El Guineal, where a head staffer will give the property 24-hour care. Vermont foodies may recognize Kerchner’s name from a chocolate package. The environmentalist began selling his Kerchner Artisan Chocolate bars in 2011 at the Burlington winter farmers market.

With his packed travel schedule of shuttling between Vermont and the DR, Kerchner (whose business is not an investor in the farm) found it increasingly difficult to find the time to make chocolate. Fortunately, his best friend is a chef — and that’s how Birong got involved. 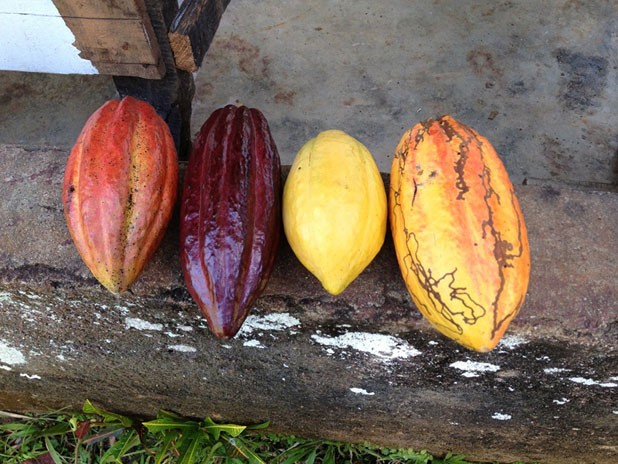 Since November, Birong has manufactured the small-batch, bean-to-bar Project Reserva bars, now sold only at 3 Squares and the University of Vermont’s Dudley H. Davis Center. He uses beans from a chocolate cooperative called La Red in Los Pajones, with which Kerchner began working as a Peace Corps volunteer in 2001. Birong will continue to draw on La Red’s trinitario beans for the 70 percent cacao bars, which boast notes of cherry and citrus.

Why is Birong so enraptured with chocolate? To demonstrate, he asks a staffer to steam up a cup of Mayan sipping chocolate, latte style. “It’s almost like a drug,” says Birong of the drink, which was used by the ancient Maya in religious rituals and as medicine. “The sipping chocolate gets you high, like an endorphin buzz. The first time I made it, I drank about four or five ounces, and I really started to get that ritualistic component to this. It’s a warm-body feeling.”

The sipping chocolate, which is on 3 Squares’ Restaurant Week menu as a dessert option, is the first of what Birong hopes will be a full program of cacao drinks. He and his sous-chefs, Mona Sullivan and Eric Montgomery, are working to develop five or six such beverages, including a “bitter-chocolate, almond-milk, iced-tea thing” and hot chocolate with a shot of espresso, which Birong has been referring to as the “Mayan speedball.”

His freshly made truffle packs a similar punch. The velvety chocolate, made from La Red’s trinitario until Birong can process his own trinitario and criollo beans, is cut with little more than boiled cream, then rolled in pieces of his own macadamias. The beans, far more complex than the hardy forastero varietal used in most American chocolate, change with each bite. The first is floral, which gives way to a meaty taste, then one of grass, ending with a flavor almost identical to that of strawberry yogurt.

Eaten unprocessed, the nibs of the trinitario are distinctly tannic. Criollo nibs are nutty, with an intense, tobacco-like aftertaste. To take full advantage of the beans’ natural bouquet, Birong is using nibs in a number of his Restaurant Week dishes.

Snapper or grouper will be crusted in criollo, then served with mango slaw and tostones. Tangy ceviche will be deepened with a cacao-nib cracker. Even a simple salad of field greens will be dressed up with vanilla-Key-lime vinaigrette, then intensified with a goat-cheese-cacao-nib fritter.

If those dishes sound straight out of the DR, then Birong has achieved his goal. “I wanted [some of the dishes] to represent the origins of the cacao, to sort of respect where it came from,” he says.

The menu’s Central American flavors aren’t limited to Hispaniola. A chicken enchilada will appear as an appetizer, served in a spicy pumpkin-mole sauce with pumpkin flesh and one of Birong’s favorite ingredients, pepitas. In traditional Mexican style, the tender, shredded chicken in the enchilada is combined with pieces of hardboiled egg. It’s startlingly delicious, and unparalleled in Vermont. Other dishes, such as chocolate fettuccine with mushroom ragout and pecorino cheese, pluck their inspirations from Europe — and Birong’s brain.

The ingredient that he says has “totally mesmerized” him won’t end its reign at 3 Squares after May 5.

The restaurant’s specials have already included several moles besides the pumpkin one, and the chef says he envisions having at least one burrito topped in the cacao-flavored sauce on the regular menu. “That’s why I’m really looking forward to Restaurant Week,” Birong says. “I get to go back to my dinner roots and mess around with stuff from our bag of tricks for our specials.”

Will selections such as grilled lamb with bitter chocolate sauce, poached apples and spaetzle ever appear daily at 3 Squares? Probably not, but they’ll be fun to taste in the meantime.

And Birong’s way with the ingredients won’t just touch Vermonters. He and Kerchner plan to build treehouses and a zipline near the DR farm to bring in eco-tourists. Pigs and chickens raised on the property will be on the menu there, along with cacao, plantains and macadamias. It’s a synergy that might make the Bicknell’s Thrush sing with pride.