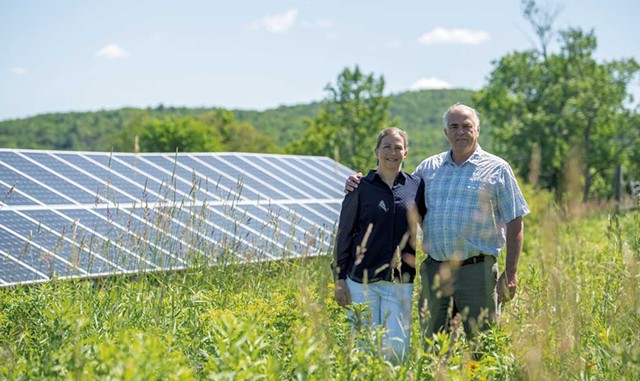 A bee hovered near Mike Kiernan as he sat outside an 11-acre solar field in Hinesburg. "That's a carpenter bee," he said. "It's checking me out."

Kiernan, 62, was beside a honeybee hive that he had expected to find empty after the colony died this winter. Instead, he arrived to see honeybees flying in and out. "I think it's a swarm," he said, referring to honeybees' method of seeking new homes.

Solar panels hummed behind him. To his right stood a sugar shack owned by the farmer who leases the land to the solar developer. Tall purple lupines grew around the fenced perimeter.

Kiernan's wife, Tawnya, 50, pulled up in a truck. Then the pair guided this reporter into the solar field through a waist-high mix of mostly native flowering plants, including Golden Alexander, blue flax, red Sweet William and buttercups.

"It's in diversity that we'll find resilience." Mike Kiernan tweet this

The Kiernans first planted the field with a native seed mix, red clover and oats in 2017 in partnership with Encore Renewable Energy, a Burlington-based community solar developer. In 2015, the couple cofounded Bee the Change to create habitat for pollinator populations weakened by pesticides and by land use that destroys their food sources and habitat.

About four years ago, Mike reached out to Chad Farrell, Encore's founder and CEO, to propose replacing turf grass with pollinator-friendly vegetation in solar fields. Farrell was aware of the threats to pollinators, he said in a phone interview, but had not seen how his company could make a difference.

"It was the first time anyone pitched us on the dual-use concept," Farrell recalled. "Mike absolutely sold us on the idea. What he's doing is palpable and really powerful."

Bee the Change, which became a nonprofit in 2016, works with eight different solar developers. The Kiernans have established about 200 acres of pollinator-friendly habitat in 26 solar fields, mostly in Vermont. Last week, they started working on the 27th, in North Ferrisburgh, with the help of their first full-time employee. 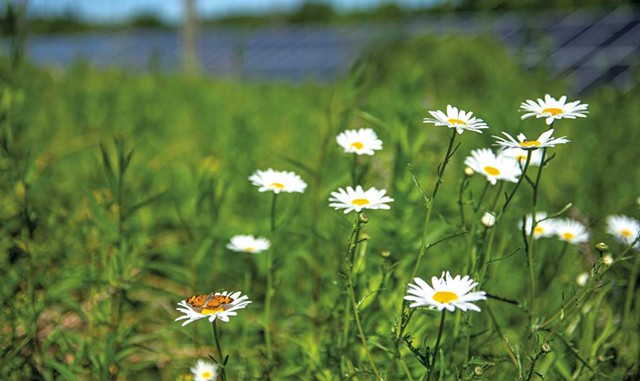 This is a side gig for the Kiernans, who live in Weybridge and are both practicing physicians. Mike has volunteered in Haiti on and off for 20 years. There, he has seen firsthand the health impacts of a precariously fragile food system in which essential micronutrients are often scarce.

"If you want to see what the world would look like without pollinators, look at 2017's winter in Haiti," Mike said, referring to the agricultural devastation caused by a pair of hurricanes. "It connects very much to food security and our future."

At home, Mike started thinking about what he could do to protect pollinators. His appreciation of insects runs deep. He was that kid "always squatting over an anthill," he said. Even while pursuing premedical studies, "I really wanted to be a doctor of insects," Mike admitted with a laugh. He revered the work of E.O. Wilson, the biologist and ant authority who championed biodiversity.

Tawnya comes from a line of forest biologists and described herself as "more of a plant person."

With both of their passions in mind, Mike recalled wondering, "What about all the space in solar fields?"

Many Vermonters, the couple observed, have mixed feelings about the acres of solar panels they see sprouting across their treasured pastoral landscape.

The Kiernans hope Bee the Change can help address that ambivalence. For the past two years, they've tended beehives and sold honey at the Shelburne Farmers Market and online to communicate their mission.

The honey is a tangible product that helps people "understand that solar fields can remain a beautiful Vermont meadow" and support pollinators, Tawnya explained. "You pull them in [with honey]. It gives us a chance to talk," she said. "What can you use to help tell the story?"

Bee the Change offers honey in plain, smoked and smoked red pepper varieties. Mike uses a cold smoker to smoke the honey and the peppers. When he first suggested smoking the honey, "I was like, 'Ewwww,'" Tawyna said with a grimace. "But it's delicious."

In 2019, the Alchemist made a limited-edition Honey Bunch honey ale with 110 pounds of honey from the Hinesburg field. "It is the most delicious honey — exquisite, very light, a cacophony of flavor," Tawnya said. "[The bees] have been on so many different plants."

Honey is a great conversation starter, and honeybees have become the "poster insect" for pollinators in peril. But the Kiernans have come to realize, they said, that a focus on non-native honeybees does a disservice to the many hardworking native pollinators in Vermont. These include 117 species of butterfly and more than 300 native bees, such as the carpenter bee that hovered around Mike outside the solar field. (See page 32 for more on native bees.)

People like honeybees "because they make honey, and we have a sweet tooth," Tawnya said. But mason bees, for example, are more efficient pollinators. And "all the chocolate in the world is pollinated by flies," her husband added.

"Preserving honeybees is not preserving pollinators," he continued. "Raising honeybees to save pollinators in Vermont is like saying you're going to save migratory birds by raising chickens." 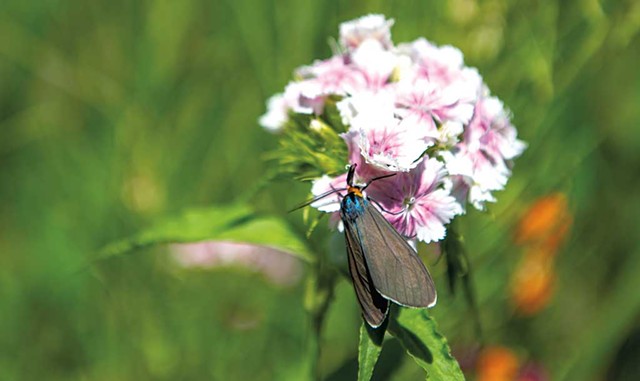 Backyard beekeeping may actually harm native bees and other pollinators. University of Vermont researchers have studied how flowers can be vectors for disease: Common viruses plaguing honeybees were found more frequently in bumblebees collected near commercial beehives in Vermont, and the viruses were detected on almost 20 percent of nearby blooms.

The couple was planning to leave the honeybee hive at the Hinesburg field vacant this year — until it became home to the swarm. Their new rule is to keep hives 2,000 feet away from pollinator habitat fields.

"I don't want to be one to knock the honeybee. I love honeybees," Mike said. "But to put all our eggs in that one fragile basket that's not native is unwise. It's in diversity that we'll find resilience."

A walk through the Hinesburg solar field easily demonstrated that diversity. A white cabbage moth flitted through the asters and bee balm. The couple pointed out a metallic green bee and then a tiny mining bee. Spying another carpenter bee, Tawnya said she recognized it by its "shiny butt — well, abdomen."

Jewelweed carpeted the shady areas under the solar panels; it cools them and improves their efficiency, Mike explained. He paused to show off a solitary nesting bee house hanging from the fence. It was built from upcycled solar panel shipping pallets and filled with hollow Japanese knotweed and daylily stalks.

A fly landed on Mike's hand, and Tawnya asked, "Was it for Christmas or my birthday that you bought me a book about flies?" Then she quickly cautioned her husband: "Mike, you're standing on an ant colony."

Each new Bee the Change solar project starts with a survey of pollinator species. "The most verdant meadow at the peak of summertime has about 325 to 350 [species]," Mike offered for context.

In Hinesburg, the Kiernans counted 17 species before anything they'd planted had flowered. The former cornfield "had been a monoculture for a very long time," Mike said. By year two, the count climbed to 93, and by year three, it hit 305.

Bee the Change is responsible for keeping vegetation low near the panels, primarily by mowing, and Farrell of Encore appreciates that his crew doesn't have to do it. Flowering plants "are a heck of a lot more attractive" than turf, he added; they're a selling point to the landowners from whom the company leases most of its fields. The vegetation also helps improve soil integrity and reduce runoff.

In the big picture, Farrell sees the partnership with Bee the Change as a win for his B Corp's values-driven mission and a way to address criticism that solar fields are displacing food production. Combining pollinator habitat and renewable energy in one location, he suggested, is "not only addressing our future energy security but also our food security." 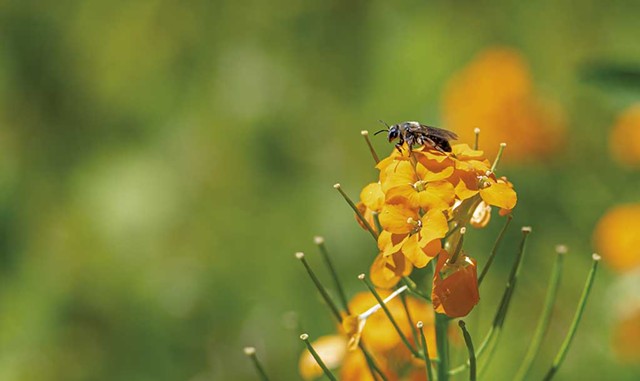 Pollinator habitats cost more to establish than turf grass, but Farrell believes the investment will pay out. "These fields are 50-year assets," he said. "It's a good idea, a good story — but it's gotta make sense financially."

Encore recently announced it has obtained financial backing for 14 new solar projects that will create more than 200 acres of pollinator-friendly habitat across Maine and Vermont. Farrell expects Bee the Change to play an integral role.

The Kiernans are still juggling patients with pollinators, but their passion project may soon demand more attention. Mike, who is closer to retirement than his wife, sees it as a promising next chapter. In the meantime, he said, being out in the fields is "the perfect tonic" for his emergency room shifts.

While continuing to sell honey, the couple is adding new products to tell the story of diverse pollinators. "People like things. If they're not going to love a mason bee, they can love a lotion bar," Tawnya said. One of their daughters developed a neck warmer filled with milkweed floss to highlight the monarch butterfly.

"The monarch is one of the ambassadors of understanding for us," Mike said. "The honeybee is another, which is why we don't kick it to the curb."

Beyond solar fields, the Kiernans hope to convince every town government in Vermont to devote an acre to pollinators, every resident to plant an 8-by-8-foot pollinator garden and every business to offset its footprint with pollinator habitat.

"Lawns are the No. 1 crop in America," Mike lamented.

To support those efforts, Bee the Change has two interns developing guides to creating pollinator gardens.

"You can't just throw wildflower seed out," Mike said. "Whenever humans try to make habitat, a certain modesty should descend."