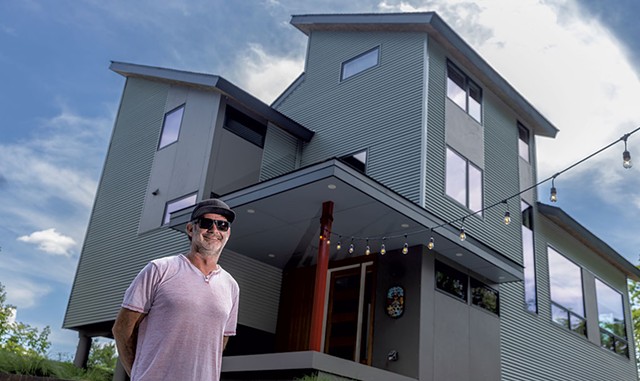 The creativity that builder Damien Helem brings to his projects is evident in his own Charlotte home. The four-bedroom, three-bathroom house, which he renovated in 2017, features cathedral ceilings, an open floor plan and huge windows that provide stunning views of Camel's Hump and the Green Mountains.

But it's the industrial-chic design, midcentury modern décor and small, playful touches that make it a unique pad. Helem, who owns Sutherland Construction in Charlotte, suspended a hammock from the structural I beam that spans the living room. His dining room "wall" — actually a garage door — opens with the touch of a button onto a spacious screened-in porch. And beneath his sleek kitchen counter, Helem installed a pipe that whisks away empty beer cans to a recycling bin downstairs.

Helem's cheeky approach to design won't surprise anyone who knows the fun-loving Australian. But he takes his work seriously and expects the same from his team. Despite a dearth of hirable tradespeople — he's lost half of his six-person crew in the last month — Helem doesn't employ workers who are, as he put it, "rough around the edges." He insists on a crew that's "clean, tidy and respectable." In fact, he says, having a smaller team enables him to put out a better product.

Helem's optimism and joie de vivre is a product of his upbringing — or a reaction to it. The 45-year-old grew up in the suburbs of Melbourne, Australia, where his father, who worked in a furniture factory, introduced him to woodworking. His family belonged to a strict Christian sect called the Plymouth Brethren, which forbade radio, television and competitive sports. Helem had to attend church every night and five times on Sundays.

So he left home at 16, mostly because he wanted to play Australian Rules football. Through Melbourne's sports community, Helem met a commercial painter who convinced him to join his decorating company and set him on his current path as a tradesman.

"He was hard on me. He had a really high expectation of quality, a solid work ethic," Helem recalled. "I have a reputation for an attention to detail, and I think that's where it came from."

Still, it took him a while to find himself. Helem spent years traveling through Australia and Southeast Asia before buying a one-way ticket to the UK in his twenties. There, he got a job at Hare & Humphreys, a prestigious London conservation and decoration company known for its restorations of St. Paul's Cathedral, the British Museum and the Royal Opera House.

Then, while exploring Europe in a van, Helem met a woman from Maine. He accompanied her to the U.S. in the mid-2000s and took a job with a high-end remodeling firm in Boston, where he further honed his carpentry skills. 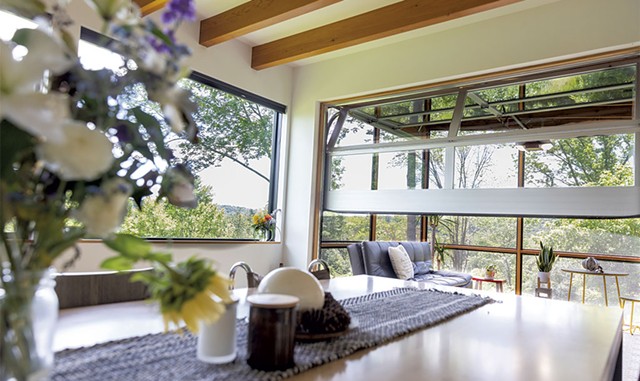 Helem later married a different American woman with whom he moved to Vermont in 2012, working odd jobs as a handyman. That year he founded Sutherland Construction – Sutherland is his father's middle name — and hired his first employee. One employee quickly became six, and his business took off. Since then, Helem has had remodeling jobs at such businesses as Peg & Ter's Bar and Kitchen and Elli Parr Boutique, both in Shelburne, and Red Barn Kitchen in Charlotte.

Now a divorced father of two, he occasionally rents out his home on Airbnb when he doesn't have the kids.

Though Helem has built homes from scratch, he prefers renovations and remodels, especially when he can work with clients to help them realize their vision and have fun with it.

"I just love life, you know?" the tall, blue-eyed Aussie said, sporting his signature five-o'clock shadow and mischievous grin. "Being brought up in that religion where I was so controlled and oppressed, once I found my groove, I was like, 'Let's enjoy it.'"

Seven Days caught up with Helem recently at his Charlotte home to talk about his business and the future of the building trades in Vermont.

SEVEN DAYS: What was your work like during the pandemic?

DAMIEN HELEM: Honestly, it was kind of nice to take a forced break, but it was also very stressful. No one knew how we were going to adapt, and I was terrified no one would have money to spend. Were we going to be building veggie patches and goat pens for people starting to homestead?

SD: But you're back up to a full schedule. How far out are you booking jobs?

SD: I hear that some contractors are only taking big jobs now. Are you?

DH: It is nice for us to have some smaller jobs sprinkled in between the larger ones, especially for existing clients who need a window replaced or something like that. It's nice to have those filler jobs, especially if we're waiting on a [subcontractor] or materials on a larger job.

SD: Any difficulties getting building supplies?

DH: With the work we do, we've been a bit more protected from supply chain issues. It's not like we're building huge houses and need a shitload of two-by-fours and plywood. With remodeling, we might be changing out a window or building an addition. Our biggest challenges are with [getting] windows and doors. Some are months out [on back order], whereas they used to be maybe a couple weeks. Same with kitchen cabinets. 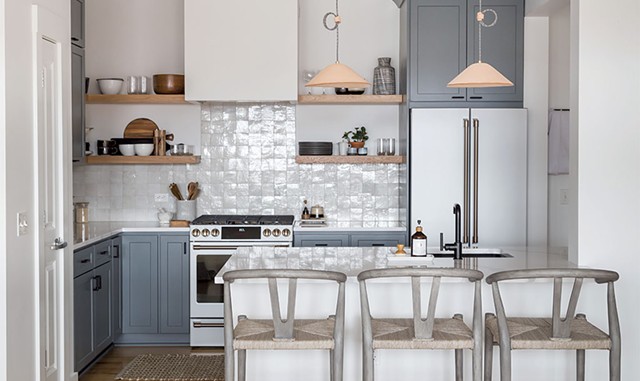 SD: Have the prices stabilized?

DH: They've come down a lot, actually, almost to where they were pre-pandemic.

SD: How's it been trying to find workers?

DH: Even when I have a full six-man crew, I still have an open ad on [the employment website] Indeed. Used to be I'd place an ad for a few weeks until someone popped up. Now, I have ads for a helper, a carpenter and a lead carpenter. The jobs have been open for months, and I've had maybe six hits. Yesterday a kid called for a summer job. I said, "Great," texted him the work address — and never heard from him again. We're really stretched thin at the moment.

SD: What's driving the shortage in your industry?

DH: Even before the pandemic, we were struggling to find young people interested in learning the trade. Young people here are being encouraged to go to college and find a white-collar job then leaving college saddled with debt and probably getting a low-paid job that's not even in the line of work they wanted. I'm really worried about the future of the industry, to be honest. The real craftsmen of our generation are going to be retiring in the next 10 to 20 years, and there's not enough young people to carry the torch.

SD: What's it like working with a smaller team?

DH: Actually, it seems to be a formula that's worked well. If I wanted to scale up, I'd have to scale a lot, and trying to find the staff to do that right now is really hard. I feel like [losing staff] has been a bit of a blessing. I've been on-site much more, and I enjoy getting my hands on the tools again. It could be a good path forward — a smaller, tighter crew and higher-quality work on higher-end projects.

SD: Are you known for a particular style?

DH: I love modern architecture. But I really enjoy the historic restoration stuff, as well — working on interesting homes that have a story to tell. I have no desire to work on cookie-cutter houses. It's nice to be challenged with interesting architecture.

SD: Do you have a reputation for something in particular?

DH: The feedback I get is that people enjoy the care and quality of work of the guys I've hired. We're known for having a good attention to detail. I'm not a designer or an architect, but I have a good eye. I can throw out good ideas, and I like to think outside the box.

The original print version of this article was headlined "Sutherland Comfort"