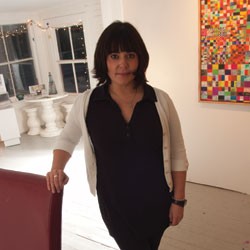 Burlington artist Sage Tucker-Ketcham has a brand-new role: executive director of the Shelburne Art Center. Which means, in turn, that the 65-year-old craft school and gallery with the storied past is facing its future with fresh eyes. That is, the flashing brown eyes of a petite 32-year-old with seemingly boundless energy.

At a reception for current SAC exhibitor Clark Derbes on a recent Friday night, Tucker-Ketcham is still so new to the job, she’s not entirely sure how many board members she has. “Maybe eight?” she ventures. “My first meeting with them is December 6.” And, asked about recent rumors that the institution is going to revert to its previous name — Shelburne Craft School — she says that’s still undecided. As for plans to turn the shambling set of inefficient wood-frame buildings into a sustainable campus — in part by harnessing heat from the kilns and metalwork studio — yes, that’s a goal for down the road.

But first, says Tucker-Ketcham, “We need to take care of updating our computer and administrative systems.” That may not sound very exciting, but bringing one’s record keeping into the 21st century is a good place to start over. The enthusiastic new director has been digging through heaps of paper files, and along the way getting a crash course in the history of the organization.

Tucker-Ketcham has been working at the center this past year, programming events and running the gallery. About a month ago, she added office manager to that role. “They needed someone to come in and do class registration and databasing,” she explains. About three weeks in, she continues, previous creative director Holly Boardman resigned. “She wants to do the New Legacy project,” Tucker-Ketcham says, referring to an upcoming capital campaign that will help the center renovate, “and she’ll still be involved. But running the organization … there’s not room for two people, financially.”

Operating on a shoestring is nothing new in the arts world, and, until the fundraising campaign is successful, the SAC will most likely make do. After all, people of all ages continue to come for classes in wood- and metalworking, stained glass, clay, fiber, photography, jewelry and visual arts. The local elementary, middle and Waldorf schools rent the center’s facilities for their art classes. A Saturday-morning clay hand-building class is “wildly popular,” Tucker-Ketcham notes.

“Part of my restructuring is to see: How do we not spend any money, but make money using what we have?” she says. “We have a huge history, and we’ve had amazing donors over the years.”

Indeed. Two of the craft school’s “angels” were members of Shelburne’s philanthropic Webb family. One of them, Aileen Osborn Webb, contributed more than financially; in the late ’40s, she imported master crafters from the School for American Craftsmen, which she had founded at Dartmouth College, to teach in Shelburne. They permanently raised the bar on the quality of craft making at the little school founded by a hobbyist woodworker in the basement of Trinity Episcopal Church in 1938. The Shelburne Craft School was officially incorporated as a nonprofit in 1945.

Ensuing decades brought waves of expansion for the school: an artist-residency program begun in 1991; a partnership with (now defunct) Trinity College offering a bachelor’s degree in arts entrepreneurship; collaborative classes with St. Michael’s and Burlington colleges; in 2002, a new showcase, called Gallery on the Green, in the center of Shelburne.

And then came contraction. The gallery closed almost two years ago, and the center refocused on its home base just down Harbor Road. Now, even with “green” dreams, Tucker-Ketcham is homing in on the core mission: classes.

And how is it that a painter with an MFA lands at a craft school? “Education has always been a huge part of my background,” she says. “I taught classes for 10 years — at the Y, at Burlington City Arts. I still teach at Burlington College.” Tucker-Ketcham also offered instruction at Studio STK, which she operated on North Street for two-and-a-half years before it closed in 2007.

“This is about the making of art, not the commercial side,” Tucker-Ketcham continues. “Yes, it’s important to sell, and we all know that. But this is about making. Everyone is so happy here — elders who have been coming for 50 years, and little kids.” She envisions even more people using the facility and reconnecting with past master crafter-teachers and potential collaborators, such as the Shelburne Museum.

“Everything is in flux,” Tucker-Ketcham says. “But in a good way.”