With a New Book, a Vermont Prof Pioneers a "Sexy" Curriculum Focused on Ethics 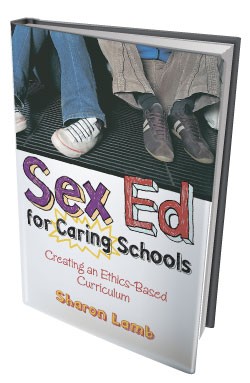 American sex education teaches young people to protect themselves from the dangers of sexual activity. But does it teach them how to treat one another with respect?

One such comparatively progressive program is Safer Choices, a health-based comprehensive sexual education (CSE) curriculum approved by the Vermont Department of Education. At Burlington High School, Safer Choices is taught to ninth graders during health class. The unit begins by encouraging abstinence but covers all contingencies, including a demonstration by a local pediatrician of how to open and put on a condom.

According to BHS health-and-physical-education teacher Gayle Botelho, the class also covers issues related to sex that go beyond health. “There’s a lot about power in relationships, sexual identities and different religions’ and cultures’ rules,” says Botelho, who has taught the course for 10 years.

That puts BHS ahead of most high schools in the U.S., where sex ed often consists of teaching abstinence only until marriage (AOUM). The subject of morals and sex has largely become a province of AOUM curricula — at least since the religious right appropriated the language of family values, Lamb writes in a succinct history of the country’s approach to sex ed.

Unfortunately, in 2004, the Waxman Report found the majority of AOUM curricula to contain inaccurate or misleading medical information. CSE advocates have attempted to combat the spread of such programs, Lamb writes, by “presenting the most value-free, scientific, reduced curriculum that can’t be attacked.”

But Lamb, who chairs the Department of Counseling and School Psychology at the University of Massachusetts Boston, believes CSE programs such as Safer Choices have lost something in the process. Namely, they don’t place sexuality in the context of the West’s long tradition of philosophy concerning the moral behavior of individuals vis-à-vis each other and society.

And when crucial ethical matters germane to sex, such as consent and coercion, are discussed in AOUM classes, they are “dumbed down,” Lamb says, to such exercises as “Name five ways to say no.” These social-skills approaches often enforce gender stereotyping — in this instance, by assuming the girl is in need of refusal skills and the boy the aggressor. They also ignore the huge ramifications these matters have in society, from domestic violence and rape to child pornography.

“There’s a history of moral-development research that says there are specific ways to enhance moral reasoning and moral development, and it’s not social-skills training,” Lamb says in a telephone interview.

Moreover, Lamb says, teaching students “how you’re going to prevent yourself from being harmed” — whether in CSE health classes or AOUM refusal-skills training — “creates a kind of selfishness, a focus on the individual instead of society.” What both curricula miss is the opportunity to discuss “why you don’t coerce, why it’s morally wrong.” If education in a democracy is, as John Dewey taught, the development of good citizens, then sex education should promote the development of “good sexual citizens,” Lamb writes.

To accompany Sex Ed for Caring Schools, Lamb and her colleagues have made a complete curriculum available for free at sexandethics.com. It includes readings mentioned in the book, ranging from excerpts from Aristotle and Hume to online chats between teenagers about the unsolicited kiss Adrien Brody planted on Halle Barre during the 2003 Oscars. Abbreviated as SECS-C (“C” for curriculum; the acronym is pronounced “sexy”), the class is aimed at high school juniors and seniors but can be adjusted for younger students.

Currently, two of Lamb’s graduate students are test-teaching the curriculum to ninth graders in a Boston charter school. “The students get so into it,” Lamb reports. “They’re interested in talking about ethics, because teenagers want to do what’s right.”

Recently, the class discussed Chris Brown’s arrest in 2009 for hitting fellow singer Rihanna. “They thought she deserved it,” Lamb says of the students. “In our class, the teacher says, ‘How do you justify that ethically, and does it work for society?’”

The idea, Lamb adds, is for the teacher to keep his or her own ethical standpoint hidden while teaching the students to build a foundation for their own views and behavior based in universal ethical principles.

Readers of Lamb’s previous books, Packaging Girlhood and Packaging Boyhood (both coauthored), know she is savvy on gender relations as portrayed in media, marketing and popular culture. But those book tours, Lamb recalls, drew mostly “middle-class parents who all wanted to know about what can I do about my child.” She wrote Sex Ed for Caring Schools, by contrast, to “try to teach an ethic of mutuality.”

SECS-C’s goals may be less measurable than the usual metrics for judging sex-ed curricula: a reduction in sexual harassment, say, rather than lower pregnancy rates. But, as Lamb says, “I don’t think you can go wrong speaking up for caring and respect and love.”