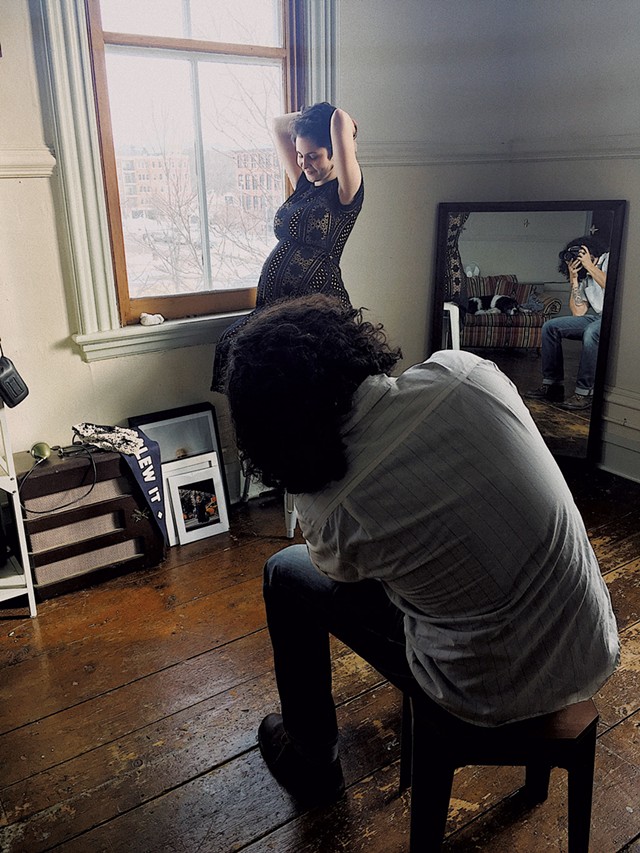 Winooski is known for many things, among them its raging river, its name — from the Abenaki word for "onion" — its cluster of popular restaurants and bars, a music festival called Waking Windows, and, of course, its traffic circle. But a proliferation of galleries and studios, like in neighboring Burlington? Not so much.

With their studio mates, the two hope to "create more of an art community scene in Winooski and the greater Burlington area," Schechner says. "Workshops, events, pop-ups, gallery shows — creating a space where people feel more comfortable trying to display their work, or wanting to talk about an idea."

Attracting people to the second-story, 1,800-square-foot workspace shouldn't be hard. Wishbone is airy and bright, with large windows and scuffed wooden floors. Some would say it has "character." It came with an electric Wurlitzer organ, a 1930s oven and a built-in loft in one of the rooms.

The collective's genesis was impulsive. "It was a very quick thing," Potter says. "It was one of those opportunities, [and we thought], If someone else sees it, they're going to snag it."

She and Schechner first looked at the space in mid-December; within two days, they'd signed a lease and were holding the keys. They began gathering other tenants and were at capacity within a month.

Like many young photographers, Potter and Schechner had dreamed of having their own studios. They do a lot of their work and personal photography outdoors, but both were looking for a controlled indoor setting. Toward that end, they have been offering portrait specials throughout January as a way to break in the studio. Schechner is extending his offer of $100 per session into February.

Potter is primarily a wedding photographer, accustomed to capturing happy brides and grooms, adorable flower girls and dance-floor antics. "What's great about [the Wishbone Collective] is that now I have that option to be able to sit down and create my own scene," she says. "I still feel absolutely creative with my wedding work, but it's nice having different people in front of this blank — some might say 'boring' — background, creating a scene from it that focuses on ... whatever [the subjects] bring into it."

Schechner, the guy behind the @lifeintheboonies Instagram account, just published a book of photographs, Finding America, featuring images from his motorcycle trip across the country. He's done commercial work for local creative brands Mean Folk and Bad Luck Goods and taken portraits of myriad Burlington-area residents, most of them young.

"For a long time it was like a fantasy," Schechner says of having his own studio. Previously, he would set up a backdrop in his mom's space — she runs the colorful jewelry company Nest Pretty Things — in Burlington's Karma Bird House. "That elevated the idea of wanting to have [my own space]," Schechner explains. "I think, once you have something like this, it just opens up a door to let you really find different creative ways of making new work."

He and Potter are also excited about potential collaborations with their new studio mates. The latest addition is Jackson Tupper, an illustrator, printmaker and designer at Burton Snowboards known for curvy, colorful, comical designs primarily focused on the human form. The others are painter Melissa Kunigis; photographer and painter Elvira Tripp; and fiber-focused artists Jackie Sage Longe and Kate Leier.

"We were really hoping that we could create a collective of people — a place where we could all help each other out," Schechner says. "It's a collaborative space, and I think that brings something kind of new to the table." Eventually, the Wishbone crew wants to host events and exhibitions.

"We're so excited about it already," Potter adds. "And if you're excited about something in February [in Vermont], then imagine how you'll feel in June."