Winter Stargazing Tips From a Meteorologist and an Astrologer 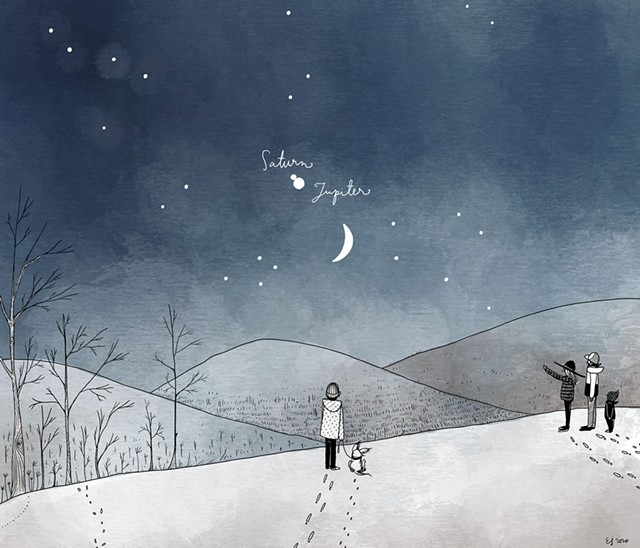 Many of us have spent too much of this frenetic, soul-searching year looking down and feeling down. As a new season approaches, perhaps we should all take a tip from meteorologist Mark Breen, who has been teaching people how to look up and find wonder since Ronald Reagan was president.

A host of the "Eye on the Sky" weather forecast and the planetarium director of St. Johnsbury's Fairbanks Museum & Planetarium, Breen knows a lot about the celestial bodies above. And he views learning the night sky as part of understanding the world we're in. "This is a constellation; this is Orion; this is what the Greeks were talking about thousands of years ago," he said.

Only 2 percent of Americans live in places where the Milky Way is visible. Rural Vermonters are often fortunate to be among them. Faced with a winter of long, dark evenings, we asked Breen for some pointers for observing our night sky.

He began by explaining that the stars are in the same place in the sky at the same time every year, and that the sky looks different according to one's latitude. For example, every mid-November, the constellation Cygnus can be viewed from our area in the northwest part of the sky. In contrast, the planets and the moon, which are much closer to Earth, "are the most changeable things in the sky," Breen said.

Different times of the month offer different advantages for stargazers. When the moon is fuller, it showcases only the brighter stars, which can make identifying constellations easier. In the two darkest weeks of the month, the blacker sky reveals more of its jewels, including the Milky Way.

Breen counsels new stargazers to have a reference point to help them understand what they're seeing. He recommends the delightful book The Stars by H.A. Rey (the illustrator of Curious George) or the Star Walk app. Guide in hand, head anywhere with an open horizon that's 10 or 20 miles away from more populated areas for a decent view of the night sky.

The meteorologist advises novices to begin studying the sky with unaided eyes, as telescopes can be tricky to use and the planets are still pretty small when viewed through a consumer telescope. "If you want to see more, use binoculars," he said. These can even reveal some of the moon's craters.

Winter weather, of course, complicates stargazing. The beginning of the season tends toward cloudiness, which makes a clear night in December all the more special. By February, Breen said, Vermonters typically have more clear nights.

This winter will begin with a celestial spectacle: a "great conjunction." Every 20 years, the orbits of Saturn and Jupiter, the two largest planets, come together in our Earthly view. On December 21, the winter solstice, the two planets will be so close to each other that they'll appear to nearly merge into one. The last time they were this close was in 1623, when Galileo was writing a book about heliocentrism, which puts the sun at the center of the universe.

This conjunction feels significant to Breen, as well as to Linda River Valente, a Montpelier-based astrologer and holistic sex educator. In Roman mythology, noted Breen, Jupiter is the son of Saturn. Valente explained that, astrologically speaking, Jupiter and Saturn have been having their conjunctions in Earth signs, most recently in Capricorn, for the past 200 years. This solstice, their conjunction will occur in Aquarius, an air sign. Their conjunctions will continue to occur in air signs for about the next 200 years.

"There is always change, and the sky is a safe place to explore that." Mark Breen tweet this

Valente sees this shift as a move toward innovation, liberation and social justice. "Saturn is about constriction and discipline," she said. "Jupiter is about expansion, exuberance and freedom. If these energies of expansion, optimism, constriction and fear are sitting on the same degree of the sky, that speaks about what is happening on Earth."

As close as the planets will appear, they will remain hundreds of millions of miles apart from each other — and us. And then, their cycle will continue.

"These events keep happening," said Breen. "They're cyclical but way beyond our lifetimes — no matter what we do to ourselves. It gives a sense that we are not in a universe that is static. It's dynamic. There is always change, and the sky is a safe place to explore that."

The sky and its changes are best experienced in good company. One morning, my boyfriend and I rose at 5:30 a.m. to marvel at an exceptionally bright Mercury burning blue near the waxing crescent, Venus, and the star Spica.

The night after we heard the elections results, we bundled up on the deck and pondered the nature of change as we gazed into the universe. Saturn and Jupiter appeared in the southwest at twilight; we set an intention to continue to observe their transit into the great conjunction. Is that a plane or a satellite?, we wondered. Another one!, we gasped, as the Taurid meteor shower bedazzled the sky. We took in a universe indifferent toward election cycles and economic systems that nonetheless allowed our new love to bloom, even in the midst of a pandemic.

A welcome feeling of smallness arose in knowing that we were gazing at starlight that had traveled for thousands or even millions of years before reaching our insignificant eyes. These eyes and all of our bodies are composed of atoms cooked up inside massive stars that exploded billions of years ago.

This is not metaphor; we are actually stardust, now capable of awareness, beauty and wonder — if we only look up.