Winter Might Be the Best Time to Stoke Competitive Fires 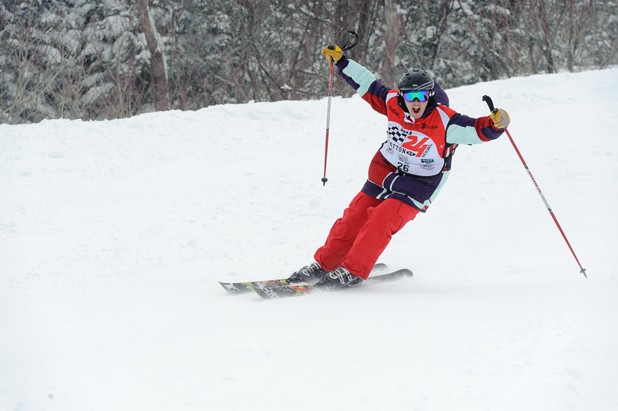 Back in the day, active Vermonters would hang up their sneaks each winter, stash their heart-rate monitors and retreat indoors for treadmill training or tuning in to serious TV time. Today, however, a whole season’s worth of races — ranging from running two miles through Fairfax for Valentine chocolate to snowshoeing 100 miles in Pittsfield for, well, bragging rights — complete the cold-weather calendar. Take your pick … and maybe pack an ice pick.

So you didn’t qualify for the Sochi 2014 Olympic Winter Games. So what? You can still channel your inner Lindsey Vonn or Bode Miller in this “beer league” of Alpine racing, wherein company teams hurl themselves through gates on Thursday nights all winter long.

Race to the Cabin

Think you’re the fastest at skiing up to Trapp Family Lodge’s Slayton Pasture Cabin for a cup of hot cocoa? Find out at this 5K cross-country ski race, whose organizers mandate classic technique (the old kick-and-glide, versus skating or freestyle) and will bring dry clothes up to the renowned cabin for participants. The $25 entry fee may not cover hot chocolate, but it does get you a hoppier beverage at the Trapp Lager Brewery.

This event may sit in the same family tree as the Spartan Race and the summertime Death Race, but it’s on a distant branch — imagine it as a grizzled old great-uncle who aims to crush you. Think 48-plus hours on a completely unpredictable course, with obstacles designed to strain both bodies and minds, including sawing wood, performing hundreds of burpees and moving awkward objects up, down and around Amee Farm. And guess what? You get to pay $400 to enter.

Olympic biathlon combines lightning-fast cross-country skiing on state-of-the-art skis with shooting a .22-caliber rifle. At Smuggs, however, athletes use snowshoes and muzzleloading rifles on a course about two miles long, with four target stages, to compete for the Marilyn Grice Memorial Trophy. Fuel up with beef jerky, not newfangled GU Energy Gel packs.

For anyone who wants to try biathlon but is wary of wielding a .22 — or a muzzleloading rifle — this race is worth a shot. Held at the Mountain Top Inn & Resort every year since 2006 and featuring cross-country skiing with paintball guns, it’s a kid-friendly event that draws experienced teams from around New England but welcomes rookies, too.

You could put in a solid day’s work at the office. Or you could spend eight hours completing as many laps as possible on a five-mile course with more than 45 obstacles — 10-foot walls, monkey bars, hay bales, barbed wire — in the mud, ice, shale and snow. There’s a team division as well as individual entries, and, to sweeten the deal, organizers set up a heated “party tent” with food and drink that’s open all day to the “polar bears.”

Seasoned athletes turn this competition into more of a sprint than a shuffle, but snowshoeing newbies are welcome at Bolton Valley’s Nordic Center, too, solo or in teams. It’s a fundraiser for the American Lung Association, and those who bring in the most dollars win ski passes.

If your sweetie doesn’t pull through on Valentine’s Day, you can get your own damn chocolate at this two-mile run that starts and ends at Bellows Free Academy Fairfax. All the post-race goodies contain cocoa.

Since 1945, courageous cross-country skiers have been hurtling — on sets of two tiny planks — 20 kilometers down the steep and winding Toll Road from the 4393-foot summit of Mt. Mansfield toward the Stowe Community Church. Falls, frozen fannies and fun ensue. But the oldest cross-country/downhill race in the United States is also a serious contest for some of the top athletes in Vermont and beyond. Kids ages 6 and up can take on the Derby Short Course of six kilometers.

Teams of two or three tackle this 10-hour winter adventure race, which can feature everything from skiing uphill in the predawn hours to hauling full packs across a ravine on a zip line to crossing frozen streams on snowshoes. Last year’s effort at Bolton Valley resort paid off in a postrace meal at the Ponds, along with swag bags stuffed with KIND snacks and massage discounts.

Staged by the same guys who concoct the Death Race, this event is a more approachable way to slough off winter-acquired calories. Choose among the 10K, half-marathon, marathon or 100-mile distance, and be prepared to snowshoe around a rugged, 6.5-mile loop with a 1200 vertical in the Green Mountains. The rules? Don’t cut the course, and don’t litter.

The nine-mile backcountry ski from Bolton Valley Resort to Trapp Family Lodge has long been a classic winter expedition, and now the Catamount Trail Association has made it an official event. The First Annual Catamount Trail Classic will take place on that fabled stretch through the forest.

The premise is simple enough: From noon on Saturday until noon on Sunday, you ski (or ride) down and take the gondola back up, round and round, until darkness and dizziness set in. A spin-off of the glitzier 24 Hours of Aspen held in the ’90s, Vermont’s version saw some 325 skiers and riders rack up more than six million vertical feet in the first-ever 24 Hours of Stratton last winter. The event raised nearly $175,000 for the Stratton Foundation. Since it’s a team event — minimum six, maximum 12 — you don’t have to stay on your feet for the full 24 hours.

The original print version of this article was headlined "Cold Hearted"