‘Winter Lights’ at Shelburne Museum Is a Holiday Spectacle

At 220 feet long, the Ticonderoga is the Shelburne Museum's central feature. Afloat on Lake Champlain for the first half of the 20th century, the imposing steamboat was moved to its current, landlocked home in 1955. Since then, it's lived out its days in a grassy gully.

But now, as part of the museum's holiday event Winter Lights, the vessel "floats" once again. Surrounded by a ring of thousands of icy blue and white lights, the Ti appears to drift on an aqueous expanse.

And that's just the tip of the iceberg. Winter Lights is a technological spectacle that transforms Shelburne Museum into a beacon of holiday mirth.

"It's fun to see the campus in a different way." Thomas Denenberg tweet this

Director Thomas Denenberg said by phone that the installation exceeded his expectations. "This time of year, when it gets dark early, it's fun to see the campus in a different way," he noted.

Opening on Friday, November 26, Winter Lights runs through the holiday season, mostly on weekends, and concludes on Saturday, January 1. From 5 to 8 p.m., attendees can walk through a series of "environments" — sites on the 42-acre grounds that have been adorned with dazzling light and sound displays. Most of the museum's buildings will be closed during the event, but the Weathervane Café and Museum Store at Diamond Barn will remain open.

Winter Lights was originally set to open in 2020 and was heavily advertised. But, Denenberg said, given the strict capacity limits still in place then and the rising COVID-19 case counts, management decided to "pull the plug" before the public had a chance to see it. The museum was forced to eat an expenditure of around $55,000.

This year's presentation is even bigger than last year's was meant to be, Denenberg said. The name Winter Lights is a nod to Gardens Aglow, a similar winter light show at Coastal Maine Botanical Gardens in Boothbay, Maine.

To create Winter Lights, the museum rented most of the LEDs from New Hampshire-based New England Holiday Light, with which museum staff teamed up to design the display.

Using just a fraction of the power of incandescent bulbs, the LEDs align with the museum's mission of conservation. Earlier this year, Shelburne Museum announced that it will be fully powered by solar energy by the end of 2021. One of two new solar arrays is currently generating power; the other is still under construction.

During a friends and family preview of Winter Lights last Friday, director of preservation and landscape Chip Stulen talked about the process of creating the installation. "A lot of thought goes into [finding] all the different circuits to be able to make this work and not overload anything," he said.

Leslie Wright, the museum's director of advancement, noted that work started "way, way early because of supply chain issues." Staffers began planning the project in midsummer 2021, and lights went up in October.

Upon arrival, visitors encounter a short rainbow tunnel that ushers them in and sets the mood. Loudspeakers play the hip-hop infused "Brandenburg" from Fort Lauderdale, Fla., duo Black Violin. The track, a defamiliarized version of Johann Sebastian Bach's Brandenburg Concerto No. 3, First Movement, signals a similar transformation of the bedazzled museum. Near the entrance, chairs cluster around gas-powered fires for those who want to cozy up for a spell.

After the rainbow tunnel, the path splits. Folks would be wise to head left, downhill toward the carousel, which is currently nonoperational but fully lit.

Just past the carousel lies the Beach Woods area, one of the most striking "environments." Sparkling snowflake projections gently cascade down the tree trunks as Jonna Jinton's haunting composition "The Frozen Call" emanates from unseen speakers. Children are likely to recognize the melody for its similarity to a musical motif from Disney's Frozen II. But the tune is actually a traditional Scandinavian herding call known as a kulning. (Check out Jinton's YouTube channel for a demonstration of how the call gets her cattle's attention.)

Emerging from the woods, spectators encounter the back side of the Ti. To get the full picture, round the path up the small ridge. Though some of the lighted areas are immersive, this one is best seen from a distance. A sea of soft lights in concentric circles envelops the ship.

From there, the estate's central pathway leads past the lighthouse. Bathed in rippling projections, the structure appears to be washed in moonlight reflecting off a calm ocean surface. 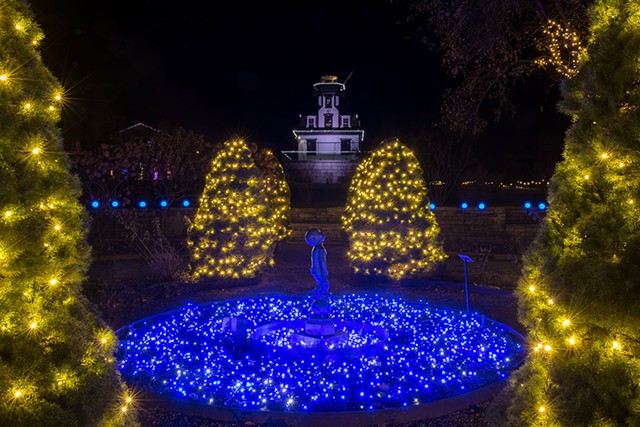 Just a bit farther is the Bostwick Garden, a petite circular patch with the Turtle Baby Fountain at its center. Instead of water, cerulean lights fill its basin, ringed by stately conifers adorned with golden lights. Moby's new-age anthem "Spirit" adds a contemplative vibe.

Guests who head back up the hill toward the Pizzagalli Center for Art and Education will encounter a shimmering pyramid. Tinsel-like strands of iridescent twinklers hang from metal latticework beams, while the ground around the structure shines with luminescent clusters reminiscent of Lite-Brite toys. Though the pyramid is set back from the path, guests can wander into and around it.

What happens when snowfall covers the low-lying and ground-level lights, such as those near the Pizzagalli Center and surrounding the Ti?

"Good question — we'll find out," Stulen said. He added that his staff is prepared for all terrain issues and will be ready to pour salt and sand, clear pathways, and dig out lights that get buried.

Likely to please guests of all ages, this year's Winter Lights is something of a test run, Denenberg suggested.

"The plan is to grow it every year for the next couple of years," he said. "The idea is to ... make it a real winter presence."

The original print version of this article was headlined "Bright Side"