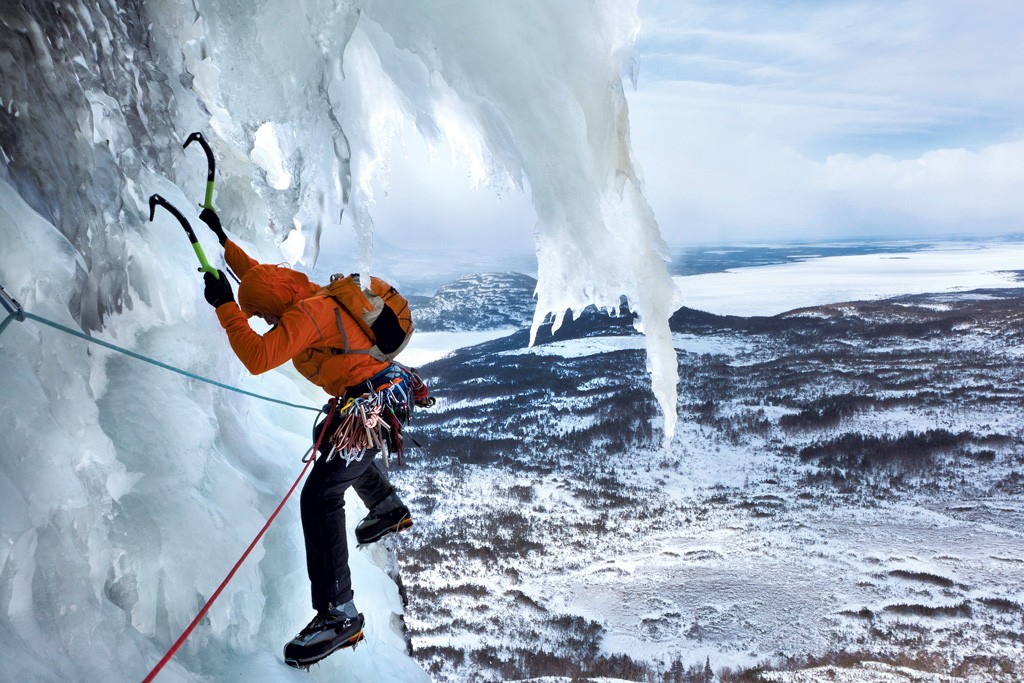 Expert ice climber and professional photographer Alden Pellett describes one of his adventures during a trip to Newfoundland last winter. He ascended 2,000 feet of ice, without ropes, buffeted by 50-mph winds. Near the top, Pellett, his red beard encrusted in ice, paused to drink a cup of hot tea and take photos. Normally he would document fellow climbers, but this was a solo outing, and he had to settle for a selfie.

Pellett is a particular breed of photographer — the kind who's drawn to arctic temperatures and extreme adventures. And he's in good company in Vermont. His frequent climbing partner, Nick Goldsmith, is a photographer as well. Prodigious photojournalist Jeb Wallace-Brodeur spends his spare time seeking backcountry adventures — and shots. Photography is both a living and a lifestyle for husband-and-wife adventurers Brian Mohr and Emily Johnson, who use some of their images to support conservation in remote mountainous regions. Burton photographer Dean "Blotto" Gray keeps up with some of the best snowboarders in the world.

These are photographers who know to test for avalanches before adjusting apertures. They've mastered the art of staying warm. And in situations where every additional pound of gear makes an excursion more grueling, they don't hesitate to load up the camera equipment.

Seven Days caught up with them for some stories and a look at their work. 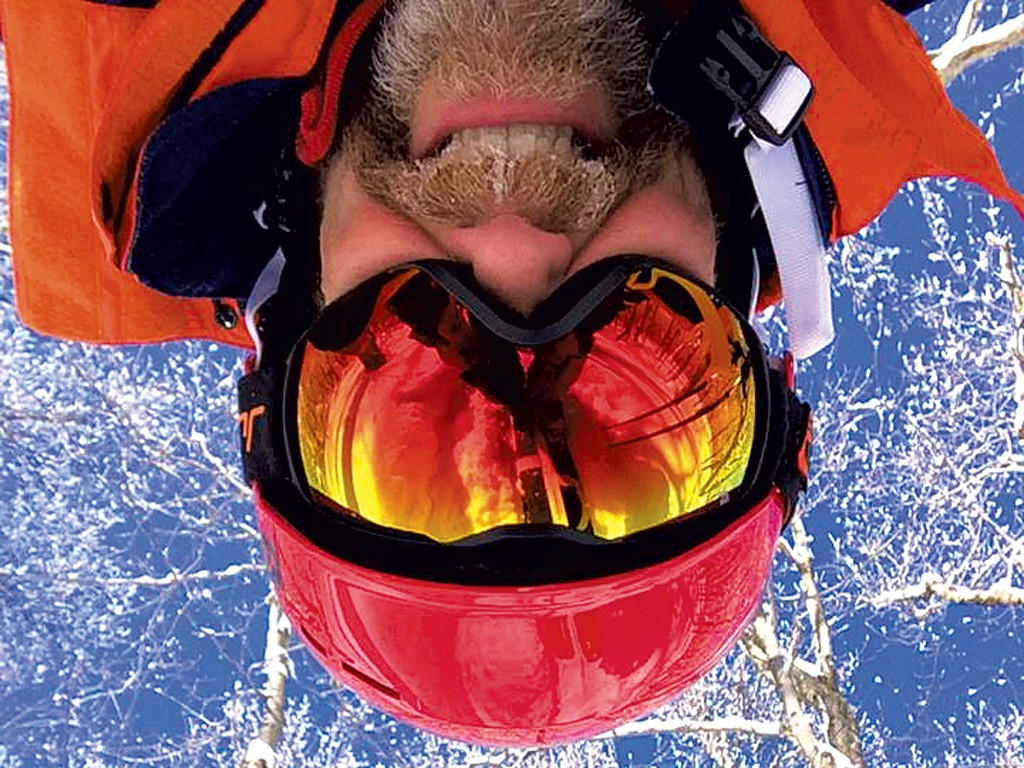 A minor calamity sparked Alden Pellett's photography career. The Hinesburg resident was working in the ski-repair shop at Smugglers' Notch Resort in the 1980s when a fire destroyed his skis and other belongings. With encouragement from his younger brother, he spent the insurance money from the fire on a single-lens reflex film camera. Pellett started shooting his friends, who were "pretty rad skiers who were skiing backcountry before it was thing," and shopping photos to magazines such as Vermont Life.

Not long after, Pellett picked up a new outdoor hobby — ice climbing. The camera came with him, either clipped to his harness or in a bag on his hip. Nearly three decades later, Pellett, now 53, is still at it.

A full-time videographer and video editor for WCAX, he doesn't rely on ice-climbing photos for living. The main appeal for Pellett is being able to document "the scenery and the suffering."

Pellett says he's never fallen while shooting on an icy façade, but the same cannot be said for some of his subjects. Years ago, on a steep climb above Lake Willoughby, he stopped to document several people ascending a nearby route. The lead climber lost his grip and plummeted. Pellet caught the moment on camera — a yellow-clad figure falling upside-down against a clear blue sky — and later published the photos in a double spread in Rock and Ice magazine.

Pellett had no qualms about distributing the image. "If anything, for ice climbers, I think it's a good lesson," he says. But he notes that he only did so because the climber survived unscathed.

One of Pellett's cardinal rules: Never let the camera interfere with the climbing. While clambering up a route in New York's Shawangunk Mountains last weekend, he and his partner helped rescue someone who'd broken both ankles. The camera stayed in his bag. 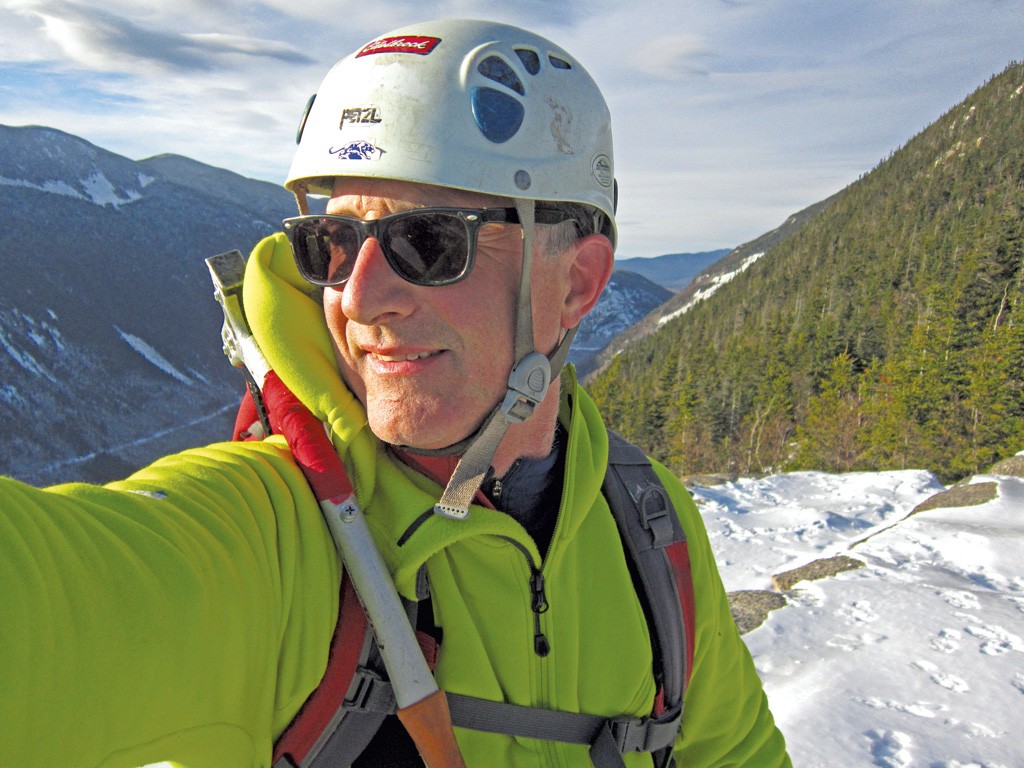 "I trash cameras all the time," says Nick Goldsmith, though he notes that a camera can sometimes survive a 200-foot fall.

Goldsmith got his start in photography while living in Killington and chasing ambulances: He'd follow emergency vehicles, shoot the accidents and then try to sell the images to local papers.

After leaving a restaurant job, he worked as a full-time photographer from 1997 to 2008, often shooting ski racing in the winter and equine competitions in the summer.

But when parents started documenting their kids using smartphones or their own digital cameras, demand for Goldsmith's professional images waned. Sometimes, he observes, people would even shoot over his shoulder to capture the same angle he'd chosen. Now based in Woodstock, the 53-year-old still shoots some competitions, but he pays the bills by working full time as a carpenter.

"It's hard to compete with free," he laments.

Cameras are less common on technical ice-climbing routes. If he's not on a paid assignment, Goldsmith prefers a simple 16-megapixel point-and-shoot camera. "You play games with it to get it to do what you want," he explains. He looks for ways to avoid the "butt shot," which sometimes means climbing an adjacent route for a better perspective on his subject.

This year, Goldsmith has climbed 64 days — not nearly enough, by his standards. His favorite spot to shoot: Lake Willoughby. "It's front lit with a southwestern exposure," Goldsmith says. "And it's big and crazy." 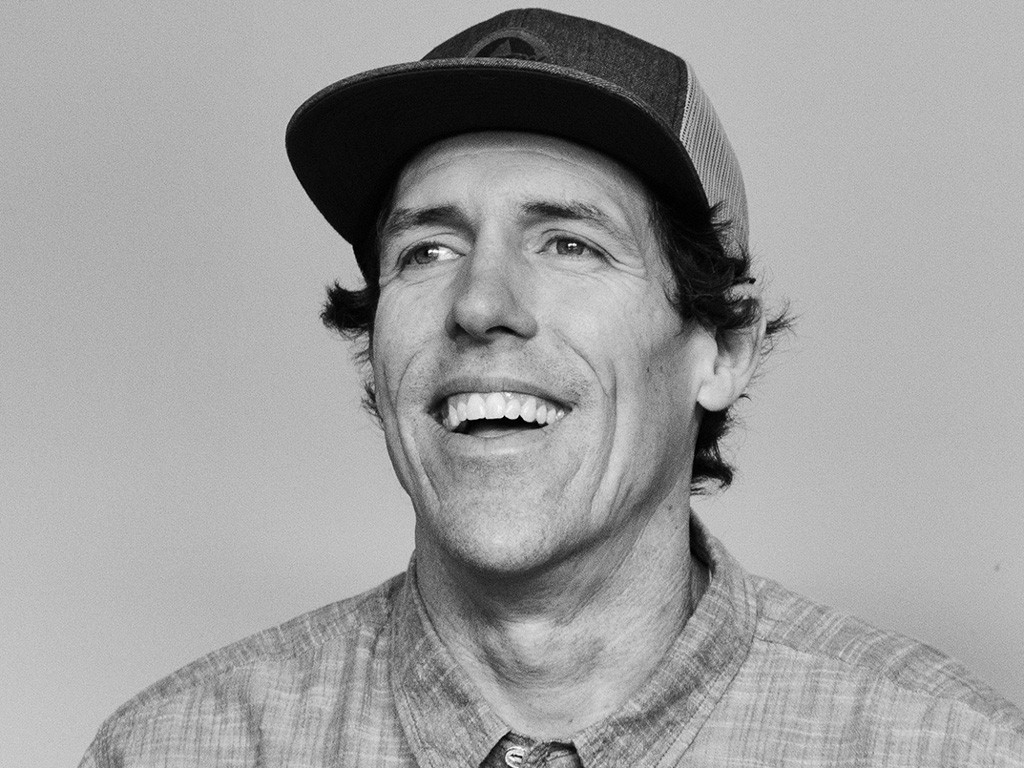 Raised in Texas and Arizona, Dean Gray, better known as "Blotto," still speaks with a slight drawl, but he left the Southwest for snowier terrain long ago. He taught himself to take photos because the shoestring snowboard company where he once worked couldn't afford to hire a professional.

Two years later, in 1999, he got a job at Burton. The 46-year-old Burlington resident rides with some of the world's most elite snowboarders. But he does it while lugging a camera, lenses, flashes, strobes and reflectors. In the backcountry, Blotto says he "keeps it light," carrying only 16 pounds of equipment. When shooting easier-to-access locations, though, he'll carry close to 60 pounds.

Now the company's principal photographer, Blotto shoots products for its catalogs, documents snowboarding competitions, and follows Burton Team riders to destinations including Alaska, British Columbia and Japan. Blotto rides and shoots about 250 days a year, often putting in 16-hour days on the slopes.

"It's a requirement that you need to be able to go from A to B without holding up the crew," Blotto says. And, he adds, "If you don't like carrying a heavy backpack or shoveling a lot of snow, then you should probably think about doing something else."

Why shoveling? "I guess another one of my titles is set design," he explains wryly. That often means building jumps for the riders.

The job can also involve a lot of standing and waiting. To stay warm, Blotto swears by his employer's apparel, but he eschews Burton's brightly patterned outfits in favor of an all-black getup. That color choice adds another 10 degrees of warmth, he estimates — at least in the sun.

As a Burton photographer, Blotto gets access to unique angles. In Alaska, where the mountains are particularly large, he often shoots from a helicopter — strapped in, doors open, feet dangling out. "That's pretty much the best scenario ever for the photographer," he says. "Earth from above is always pretty fascinating."

Blotto knows how to respond to "sluffs," aka small avalanches. "You learn to not let them intimidate you," he says. "If you get scared, they will sweep you down the mountain." But, he emphasizes, the Burton team takes care to avoid dangerous situations. Nearly everyone knows someone who's died in an avalanche.

Blotto gets frequent emails from aspiring snowboard photographers. His advice?

"You need to be around your subject matter," he says. "You need to go live on a mountain where there's snowboarding." 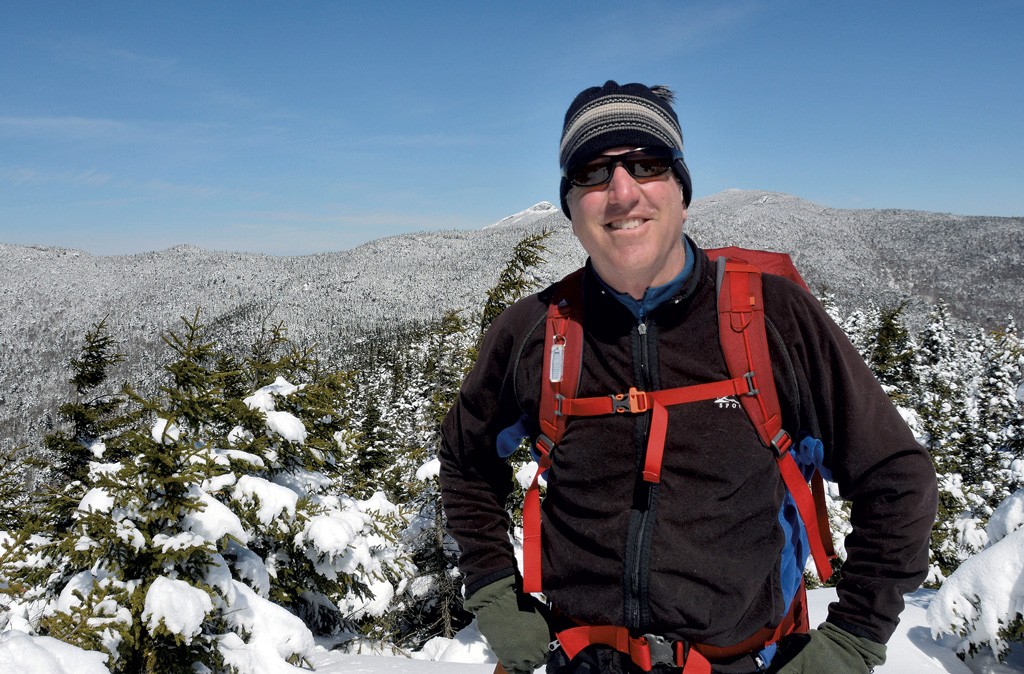 If you read the news, you've probably seen Jeb Wallace-Brodeur's work. The Barre-Montpelier Times Argus photographer also freelances for a number of out-of-state and local publications, including Seven Days.

On his days off, he pursues his "true love" — backcountry adventure. Whether biking, hiking or skiing, there's a camera in his backpack. 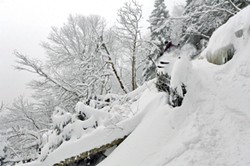 The Montpelier native grew up skiing, first cross-country, then Alpine. When he graduated from Middlebury College, his parents gave him a Pentax K1000, which he took with him when he went to work as a forest ranger in Colorado.

After returning to Vermont, the self-taught photographer landed a job shooting on Saturdays for the Times Argus and tended bar on the side.

Now a veteran photojournalist, the 49-year-old spends his spare time applying news principles to the slopes. He avoids using models whenever possible, preferring to catch spontaneous moments. And he prefers off-the-beaten-path photos, which often require skinning up mountains before anyone else has disturbed the snow, and then "smashing around in the woods next to the good skiing line." Sometimes it means standing still for hours on end, in temperatures as cold as 30 below. Luckily, Wallace-Brodeur rarely gets cold. "I've got a really hot internal engine," he explains.

Wallace-Brodeur sells photos to Powder and Outside magazines and the Vermont Ski Areas Association, among others. He barters, too, trading photos for season passes.

Now and then, the guy does take a break for pure fun: "If it's a powder day," he says, "I'll put the camera away." 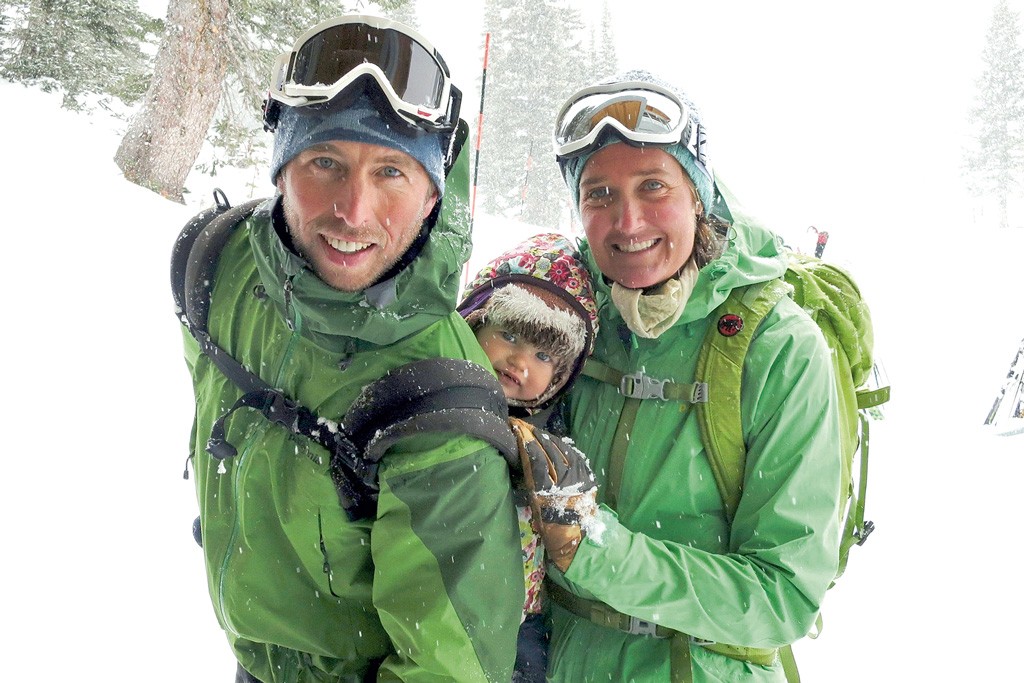 Brian Mohr, who started backcountry skiing in the White Mountains as a teenager, met his future wife and fellow skier on the way to a music festival in Colorado. Emily Johnson was studying photography at the time, and Mohr quickly picked up a camera, too.

"There's really nothing that we don't document," says Mohr. As proprietors of EmberPhoto, the Moretown couple will shoot weddings and take family portraits, but they carve out plenty of outdoor time, too.

"When we've got one of the heaviest storms of the year bearing down, it would be a shame if we weren't able to get out and immerse ourselves in that event," Mohr explains. "We're pretty darn good at being really, really comfortable, no matter what's going on weather-wise."

Often the pair will throw camping gear and skis into bike trailers and pedal from mountain to mountain, shooting one another on the way down.

Mohr and Johnson have sold images to companies such as Patagonia, Backcountry magazine and Sugarbush Resort. (They've also contributed images to Seven Days and its tourist publication, BTV.) Mohr estimates that about half their income comes from outdoor adventure photography.

On one trip, Mohr and Johnson spent several months sailing around Iceland, anchoring in fjords, climbing up mountains and skiing down. Whenever possible, they prefer using what Mohr calls "people-powered transportation," but, he admits, they did turn on the boat's motor after a storm deposited nearly a foot of snow on the deck and produced 15-foot swells.

Mohr lists some of the typical challenges that accompany ski photography: frostbite, fogged-up camera lenses, camera buttons jammed with wet snow, frozen batteries. "We beat the living heck out of our equipment," he notes. "The flip side is, we get the shots."

Having two young daughters hasn't changed that, or the couple's outdoor lifestyle. Johnson skied while pregnant and, when their first daughter was 9 days old, Mohr started Nordic skiing with her on his back and his camera on his chest.

He and Johnson also use their work to support conservation efforts, donating photos to organizations that are working to preserve land in the Patagonia region of Chile and other locales.

Their latest project is closer to home: Mohr and Johnson are using their photos to help the Catamount Trail Association get its new Vermont Backcountry Alliance program off the ground.

The original print version of this article was headlined "Extreme Exposure"