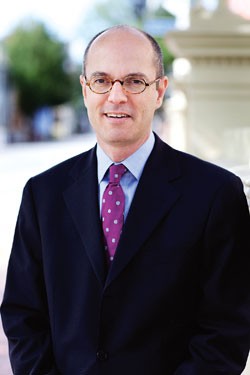 Geographically speaking, the great American artist Winslow Homer (1836-1910) is associated with the coast of Maine, not with New England’s “left coast.” But Shelburne Museum director Thomas Denenberg has provided the landscape painter with a posthumous, if tenuous, link to Vermont with the extensive and informative — and award-winning — exhibition catalog for Weatherbeaten: Winslow Homer and Maine, which Denenberg cowrote and edited. So what if that recently concluded exhibit was presented by the Portland Museum of Art, where Denenberg was employed as deputy director and chief curator before he came to the Shelburne in November 2011? The New England Book Festival saw fit to declare the catalog a 2012 winner in the Art category.

It so happens that Denenberg is a Winslow Homer scholar. And it’s a shame that most Vermont art lovers may not see Weatherbeaten, titled after a painting of the same name that depicts a wave crashing against Maine seacoast rocks (though it is available in hardcover on Amazon). Denenberg’s writing is both lucid and poetic. About that eponymous painting, he writes that Homer eschewed romance “in favor of painting a life lesson for the modern era, a visual poem about time and constancy.”

Denenberg explains that the PMA exhibit was a “public capstone of a six-year project at the Portland Museum of Art.” Specifically, that project was to purchase and restore Homer’s former studio — once a carriage house on the property owned by family at the edge of the ocean, and minutes from the museum. (Visitors to the exhibition had the option to tour the studio as well as viewing the paintings, amassed from public and private collections around the country.)

Denenberg suggests that Homer’s works might be “the fulcrum to modernism in the United States.” The exhibit examined, he adds, “that moment when all the figures retreated from Winslow Homer’s paintings.” Indeed, though it’s subtle, a close observer can detect an abstraction of the real in Homer’s rendering of the shore where, Denenberg writes, “the Atlantic Ocean laps, murmurs, and roars with the seasons.”

Novelist and art essayist John Updike, Denenberg says, had a friend who lived across the road from the Homer property and visited frequently; Denenberg had occasion to talk with Updike about the place and the artist’s legacy in American painting. “We discussed the critical themes of the exhibit,” he says. Unfortunately, Updike died in 2009, three years before the show came to fruition.

Vermonters are not likely to see a reprise of such an exhibit — which Denenberg calls a “once-in-a-lifetime opportunity” — at the Shelburne Museum. But local art lovers might look forward to his commentary on the museum’s upcoming focus on three generations of painters named Wyeth, in an exhibit provocatively titled “Wyeth Vertigo,” later this year.

The print version of this article was headlined "Homer Run".