Aisha Bassett isn't originally from Vermont. But that hasn't stopped her from embracing something that befuddles many out-of-staters: our bizarre name for soft-serve ice cream.

"I remember the first time I saw the word 'creemee' on a sign," Bassett recalled. "I was thoroughly entertained. It's such a fun, quirky Vermont thing."

With Offbeat Creemee, Bassett takes things a step further into the unconventional. Next month, when she opens the concession stand at the newly renovated Myers Memorial Pool in Winooski, she'll serve scoops and swirls of flavors that go way beyond the typical maple or chocolate-vanilla twist. Think coconut-charcoal, matcha-mint, beet-chocolate chip, and lemon meringue with vegan lemon curd and Biscoff cookie crumbs.

"I dove in deep and ditched all the dairy." Aisha Bassett tweet this

Vanilla will be a mainstay on the menu, too. But, like the rest of Offbeat Creemee's offerings, it will be entirely plant-based.

"I dove in deep and ditched all the dairy," Bassett said with a laugh.

Bassett, 28, launched the first iteration of her ice cream business, Little City Creemee, with plenty of butterfat, dairy, eggs and sugar in 2020. She envisioned a mobile cart with flavors inspired by the world of high-end European pastry. "Anything that's a cream can be an ice cream, like cannoli cream or pastry cream," she explained.

The Bethel, N.Y., native honed her pastry skills while earning her two-year culinary arts degree and four-year restaurant management degree at State University of New York Cobleskill. She worked in Italian bakeries and as a cake decorator in the Albany, N.Y., area before moving to Winooski with her husband, who grew up in Vermont.

The couple wanted a slower pace, Bassett said, and to be close to her husband's family. She did a baking job at a local grocery store, then worked as a Baker's Hotline representative for King Arthur Baking.

It was while walking the dog that she noticed Winooski's lack of creemee stands — and got the idea of filling the void with her own business. "I hated going out of my way to Burlington or a totally different town just to get an ice cream," Bassett said.

She researched soft-serve equipment and eventually decided to buy a machine with a lump sum she'd inherited from her dad. She and her husband borrowed a trailer and drove to Massachusetts to pick up her purchase in February 2020.

"And then COVID hit," Bassett said. Given the uncertainty of the pandemic and the rising workload at her full-time job, she decided to pause Little City until the fall. At that point, she started taking orders via Instagram and delivering creemee puffs, creemee pies, creemee-stuffed cannoli and hand-packed pints to customers around town.

Based on the area's changed food landscape, Bassett made a decision. "Since I'm just doing ice cream, I realized I had to set myself way apart and do something that Vermont doesn't really have," she said. 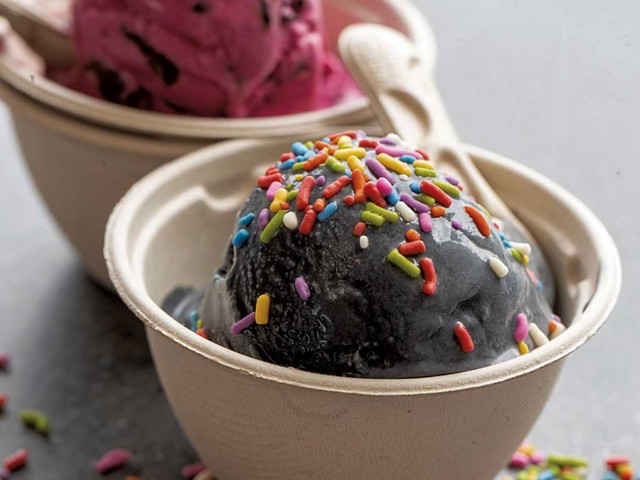 She spent the winter researching: reading food science articles to understand how fat and emulsions work, and then testing her recipes on a small home ice cream machine. Some were flops, but the failures offered good lessons: "Treat your ingredients how they want to be treated," Bassett said. "You can't force anything."

The nondairy base she landed on is a mix of coconut and oat milk, which she chose both for texture and for environmental reasons. With a fat content close to that of heavy cream, coconut gives the final product a luxurious, creamy mouthfeel. Oat milk has a smaller water footprint and overall environmental impact than commonly used nut-based dairy alternatives such as almond milk.

"And if I can't find it on the market, I know I can make it quickly and easily," Bassett added.

In early June, she officially rebranded Little City Creemee as Offbeat Creemee with behind-the-scenes help from On the Fly, a grassroots collective of business, finance and marketing experts that popped up to support Vermont's food, drink and hospitality industries during the pandemic.

The new name — with the tagline "plant based drip" — matches the confidence with which Bassett is churning out her 100 percent dairy-, egg-, refined sugar- and soy-free ice cream.

"A lot of places are soft in how they're saying they're plant-based," Bassett said. "This is what it is, and it's good. It has drip."

The name is also a nod to Bassett's late father, who was a jazz performer. "Offbeat has that funkiness, that music kind of vibe," she explained. "Plus, I like to experiment, so you might see some funky things — the offbeat flavors."

The rebranding arrives just in time for Bassett officially to introduce her Black- and woman-owned business to the community at Winooski's reopened pool. She'd initially planned to be a mobile operation, but in March, when she came across a community board posting from the city seeking a local business to run the Myers Memorial Pool Snack Bar, she couldn't pass it up. She submitted her proposal and got approval to lease the space at a remote Winooski City Council meeting on April 19.

The Myers Memorial Pool reopened on June 6 after closing in 2016 for a complete renovation, according to the city's website. The redesigned facility features a zero-entry program pool, a lap pool and a 16-foot water slide.

Bassett will have a view of it all from just outside the splash zone. One of the snack bar's windows faces the pool, while the other side faces the sidewalk for walk-up orders from street traffic.

Besides cones, Offbeat Creemee will sell milkshakes with flavors ranging from matcha to cookies-and-cream, sorbets made with produce from local farms, and more of Bassett's experiments. Among those is a new take on the classic float combining vanilla ice cream with Queen City Kombucha.

She plans to draw on other nearby small businesses for her toppings and mix-ins, using cookies from Essex's Sweet Alchemy Bakery and Café and popcorn from Burlington bakery Black Rose Briar, for example.

"I can't wait to see kids in their strollers falling asleep with a creemee in their hands after getting totally sun-soaked and waterlogged," she said.

Bassett isn't vegan herself — she admitted she loves a good cheese and meat platter — but she is looking forward to providing something indulgent to customers whose diet is restricted by allergies or cultural or religious beliefs.

"It's not a healthy creemee," she said of her base. "But it's a good alternative for people who can't usually have them."

With Offbeat Creemee's community-funded Cone It Forward program, Bassett is also thinking about the kids who may not be able to afford a creemee. To help them enjoy one for free, Bassett will seed the program by donating all tips from the business' opening weekend and every Saturday throughout the summer.

"We want to support families and kids and make sure they feel welcome here," she said. "We've got your back, and if you want a creemee, let me know."

Going by the rave reviews that Offbeat Creemee's flavors earned in a recent taste test with teens from the King Street Center, kids could be lining up for post-swim treats. Bassett shared a questionnaire that one focus-group member filled out, describing the vanilla as "good," "the best," "awesome" and "amazing."

And she's got a strategy for winning over potential customers who are leery of vegan food.

"I'll give you a free sample if you're really going to doubt me that much," Bassett said with a smile. "Trust the creemee."