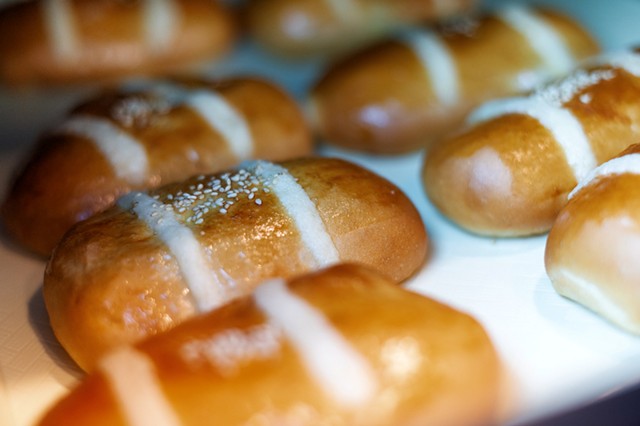 Ken Liu moved with his family to Vermont from Hong Kong when he was 12. A decade later, he still remembers his favorite childhood breakfast of a hot dog bun and boxed chocolate milk bought from one of the Asian city's countless little bakeries.

"I would grab it on the way to school," said Liu, 22. "All kids in Hong Kong would have that experience."

Now, the hot dog bun is one of the many varieties of Hong Kong-style buns on the menu at his family's little bakery in a very different city almost 8,000 miles away.

Liu's parents, Ann Wong and King Chiu Liu, opened Morning Light Bakery across the street from the Winooski campus of Community College of Vermont in April 2019.

All of the buns, savory and sweet, start with the same pillowy soft, slightly sweet, yeast-raised dough. They come in different shapes filled with cream or coconut, roast pork or chicken curry. We tried half a dozen and loved them all.

When it comes to Hong Kong-style buns, the most iconic are the round pineapple buns. My son developed a deep appreciation for them while studying in Hong Kong a few years ago. When we visited him there, he took us to one of his favorite bakeries. The storefront was lined with trays of freshly baked pineapple buns with their signature dark golden glazed tops that crackle when baked into a pattern reminiscent of a pineapple skin.

It was there I learned that appearance, not ingredients, gives the pineapple bun its name. But to our surprise, at the center of the excellent pineapple buns from Morning Light we found a small chunk of actual pineapple, tucked into an equally unexpected custardy layer.

Before my chat later that week with Ken Liu, the designated spokesperson for the family business, I got to stick my masked face into the bakery to meet his mother. His father had gone home after baking since early morning.

The bakery has been closed for on-site consumption of pastries and drinks since mid-March. It reopened on May 1 with reduced hours Friday through Monday for takeout.

Wong was constructing a special order for some of the bakery's signature layered sponge cakes. Perfect slices of kiwi, mango and strawberries were lined up like fruit jewels waiting to embellish cake and cream.

According to Liu, who works at the bakery and is also a part-time college student, his parents take their dough seriously.

Although they didn't bake professionally in Hong Kong, his parents did take baking courses there. "It is something they always wanted to do," their son said.

"They learned all the different ways to make the [bun] dough," he recalled. "They have done a lot of experiments, and they might have found the golden ratio, but there is always room for improvement. They are never satisfied."

The family moved to Vermont in 2011 to join relatives in the area. "We wanted a different environment. Hong Kong is very crowded," Liu said. "We have heard a lot of good things from our relatives about Vermont. There are a lot of different opportunities here."

One day, while driving from their home in Essex Junction, they spied the empty space at 106 East Allen Street that had previously housed Dobrá Tea.

The small size suited them just fine; it was similar in scale to many of the little bakeries back in Hong Kong.

King Chiu Liu left his job as a custodian at the University of Vermont when the family opened the bakery. His wife still holds down a second job.

She is also responsible for the bakery name. "She wants all our customers to have a great morning, like the morning light is splashing on them," Ken Liu said.

"In Hong Kong," his mother added, " everyone goes to the bakery for a quick breakfast."

Liu said the family has been surprised by the number of Vermonters with connections to Hong Kong who are familiar with the buns and other classics on the menu, such as bite-size sweet egg tarts. (These are similar to Portuguese custard tarts, common in Hong Kong and the nearby former Portuguese colony of Macau.)

"In Hong Kong, everyone goes to the bakery for a quick breakfast." Ann Wong tweet this

One Friday-morning regular, Jenn Jurasek of Shelburne, said she was familiar with Chinese bakeries in Montréal and was excited to hear last year that one was opening locally. In addition to her favorite buns — the pineapple and red bean-filled — she strongly recommends the pork belly bao.

Jurasek describes it as "a gently steamed, puffy, delicate bun filled with soft pork belly cooked with hoisin and spice, and served with a little bit of greens." She likes to pair her bao with a bubble tea or passion fruit green tea and, if available, a red bean paste-filled sesame ball for dessert. (These labor-intensive items are only offered occasionally.) "I love anything red bean paste!" she said.

Although Liu still enjoys the occasional hot dog roll, he now favors the croissant-shaped taro bun filled with a sweetened purple paste made from the starchy root vegetable. On the savory side, he loves the tuna with corn, mayonnaise and black pepper. "It really catches your tongue," he said.

Other tongue-pleasing treats on the menu include small coconut-dusted nuggets of mochi encasing a morsel of fresh mango or strawberry. Featherlight Japanese-style cheesecake is a welcome reprieve from the dense American versions. A subdued pastel rainbow of cream-filled sponge rolls includes a pale green matcha with the delicate savory flavor of Japanese green tea.

Liu said the family will offer traditional mooncakes for the Mid-Autumn Festival, a major holiday celebrated across Asia that falls this year on October 1. The squat, circular pastries are usually filled with lotus seed or red bean paste.

Throughout the pandemic, Liu said, his family has appreciated dedicated repeat customers. Their landlords, Nate and Jacquie Dagesse, have been "[two] of our biggest fans," Liu said.

When the family first approached the Dagesses to discuss renting the space, Nate said he and his wife had to educate themselves on what a Hong Kong-style bakery was.

"We liked that it was different than the other bakeries in town," he said. "We've tried everything on the menu by now."

Jacquie is partial to the classic bubble milk tea. Nate said his menu favorites are "almost all the buns." If he had to pick a few, he conceded, they would be the roast pork bun and the pineapple buns.

"Oh, and the tuna bun is also one of my favorites," Nate added. "If you like tuna sandwiches or tuna pea wiggle, you will definitely like it."