Winooski VFW Will Tank Before Giving Up Its Landmark Sherman 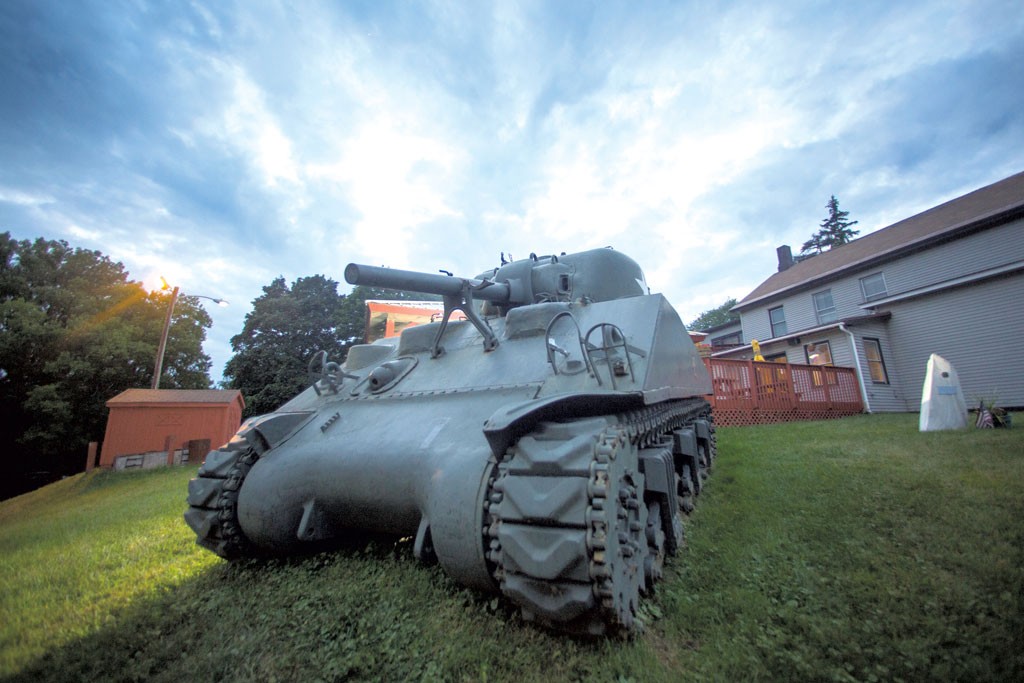 The Winooski Veterans of Foreign Wars Post 1767 could use some quick cash. The leaky roof needs to be replaced. Monthly utility bills have been tough to pay. With the World War II generation dying off, Post 1767 has lost 70 percent of its members in the past two decades, and revenue from annual dues and bar sales has plummeted.

So when an opportunity to make $90,000 fell into their laps a few weeks ago, post leaders had to take it seriously. "It's a struggle to keep the place open," VFW post quartermaster Craig Lavigne, a Vietnam vet, conceded in a recent interview. "That $90,000 would really help things."

A history enthusiast from England has offered to buy the World War II-era tank that sits on Post 1767's lawn — and has since the late 1950s. The potential deal has sparked a community-wide discussion among Winooski residents, for whom the armored combat vehicle is a beloved local landmark.

It started with an email to Winooski Mayor Seth Leonard. In mid-August, Thomas Gray, a resident of northern England who billed himself as a "military vehicle collector," wrote: "It has come to my attention that located in Winooski, Vermont is an old M4 Sherman Medium tank," Gray informed the mayor. "This vehicle is understandably not in the best condition and is not complete having stood outside for many years. However, vehicles in just this condition are exactly what I am looking for."

Gray and his family display their collection of old military equipment at reenactments and commemorative events throughout Europe: In 2014, he took part in a re-creation of the famous Operation Market Garden, a failed Allied attack in the Netherlands and Germany. Gray said he has imported vehicles from as far away as Norway. He estimated the Winooski tank was worth as much as $93,000.

Promising it would be restored to its "original and running condition," Gray said it would be "preserved for educational purposes and commemorative events in honour of all those young men" who had served.

Since the city doesn't own the tank, Leonard forwarded the email to Lavigne, who initially suspected it was a prank. He wondered, What would anyone want with an old tank?

In 1957, Post 1767 leaders had no trouble answering that question. Officials at what was then Ethan Allen Air Force Base in Colchester offered the 30-ton tank to the veterans' group, free of charge. It accepted the fighting machine named after William Tecumseh Sherman, the Union Army general whose slash-and-burn "march" through Georgia helped end the U.S. Civil War.

More than 50,000 Shermans were manufactured to counter the German blitzkrieg, according to the Tanks Encyclopedia website, and it took a five-person crew to run one. Although they saw action in every theater during World War II, no one interviewed for this story knows if Winooski's Sherman ever got shipped overseas.

It did travel to the VFW on a flatbed truck that, groaning under the weight of its unusual cargo, tore up part of Maple Street. Workers managed to hoist it onto its hilltop perch, where it appears poised to blast any intruders crossing the Winooski River bridge from Burlington.

Post 1767 isn't the only Vermont VFW organization equipped to defend itself. The Springfield VFW also has a tank, and the Hyde Park VFW has a Huey helicopter, according to Don Dockter, senior vice commander of the Vermont VFW.

In the Onion City, the tank has served as a playground, meet-up spot and navigational aid for generations of Winooski residents. On Cabbage Night — for flatlanders, on October 30, Vermont kids traditionally go out and raise a ruckus — Lavigne remembered heaving eggs and produce at passing cars from behind the tank. The tank's hatch has since been sealed and the barrel filled with concrete.

"It's an icon. I played on that tank as a kid," Winooski City Manager Katherine Decarreau said. "Everybody did. It's a rite of passage. It's hard to imagine it not being there."

Residents who live nearby use it as an easy reference point when giving directions: "Make a left at the tank" is pretty hard for a visitor to mess up.

Lavigne posted news of Gray's offer on Front Porch Forum, asking locals for their views. Some asked where the money would go. A mother relayed that her child suggested it would be good to keep the tank in Winooski in case the city needs to fend off an attack. Some suggested putting the matter to a citywide vote.

Most responders said it should stay, though they were weighing in without knowing the full story: Lavigne failed to explain in the Front Porch Forum message that Post 1767 is struggling financially.

It's a story playing out in VFW halls across the country: Nationally, 500 World War II veterans die every day, according to the federal government. Only four remain in the Winooski chapter. Veterans of more recent conflicts have generally shown little interest in restoring the ranks.

In Vermont, VFW posts are losing about 10 percent of their membership every year, said Dockter. Vermont VFWs currently have 5,500 members, down from more than 7,000 just 10 years ago.

Vietnam veterans now constitute the majority of local membership in VFWs, which restrict eligibility to soldiers who deployed to combat zones.

In recent years, the Winooski post offered a program with the Vermont National Guard in which soldiers returning from Iraq and Afghanistan were encouraged to apply and have their first year's dues waived. Only a few took them up on the offer, Lavigne said, and most of those vets have stopped showing up.

"We've tried everything," Lavigne said. "We sign a few up, but after a while, they don't seem to come around. They've got full-time jobs, they've got families and, nowadays, both parents work."

The Winooski post makes money by renting the space for parties, weddings and memorial services, and, of course, from sales of beer, booze and snacks in its canteen. On most days, though, the place sits empty except for Lavigne and the occasional visitor. Last week, all the chairs were neatly tucked under tables.

The Winooski post has another problem: A competing organization is a stone's throw away. On nearby Weaver Street, the local chapter of the Regular Veterans Association does a brisk business at its bar on most weekend nights. The RVA, one of the few remaining chapters of a once-national organization, allows anyone who has served in the military, in any capacity, to join.

On most nights, it appears much busier than the VFW, with middle-aged couples in the large bar area.

But one thing the RVA doesn't have is a tank.

There's no talk of a merger. The membership requirements of the two groups are too different. And it didn't take long for Lavigne to dig in: He won't sell the tank, at any price.

"We'd close down before giving it up," he said.

To announce his decision, he hung a handwritten sign on the tank, declaring, for all to see, "THIS TANK IS NOT FOR SALE!!"

"It means too much to our remaining WW2 vets and the whole organization," he wrote to Gray, rejecting the offer. "We would all be speaking German if it wasn't for that Sherman and all of our American tanks that were there."

The offer has motivated VFW leaders to consider ways to leverage their most prominent asset.

Lavigne is thinking of holding a naming contest for the tank to generate community interest in the post and, maybe, a little cash. Military ships and airplanes usually had nicknames, Lavigne noted — why not the Winooski Sherman tank?

Correction 9/4/15: An earlier version of this story identified Craig Lavigne as the post commander at the Winooski VFW. He is, in fact the post quartermaster.