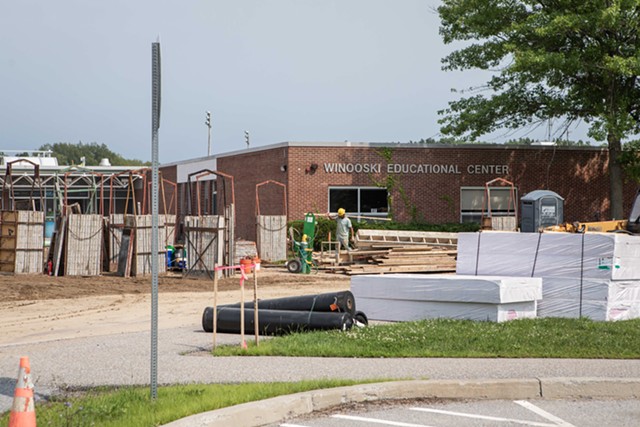 Two popular Winooski teachers whose positions had been slated to be eliminated next year will in fact keep their jobs. On Monday, the school board voted 4-1 to rescind the cuts, which had been planned because of declining enrollment.

The school board had previously OK'd the elimination of one math and one social studies position in January, when it approved a budget to present to Winooski voters on Town Meeting Day. After officials determined that teachers Will Andrews and Jeff Duggan would lose their jobs, educators rallied around them at a March 9 school board meeting that around 120 people attended virtually. A dozen or so members of the Winooski Education Association spoke in support of the two.

Andrews, who has worked in the Winooski district since 2005, is one of the originators of the iLab, an innovative course created in 2013 that allows students to pick a topic of interest and to design a project around it. The 2019 Vermont teacher of the year, Tom Payeur, described Andrews as an educator with "a distinctly unique ability to bring out individual students’ true passions.”

In an emotional statement at the March 9 meeting, Andrews described learning his position was being cut as a “disorienting experience” that made him feel “disrespected and angry, scared and anxious, and just straight-up exhausted.”

He spoke about his other responsibilities in the district — working as an adviser to Winooski students preparing for post-high school life, organizing community meetings, and recording students’ music compositions during his lunch breaks.

“I thought I’d continue to teach here for much longer, expanding the iLab options, building up our already-robust community connections and designing curriculum to help our students navigate their way through graduation, and also saying hello to every student passing by my classroom,” Andrews said.

Teachers said the cuts were indicative of a worrisome change in school district culture — from a collaborative one that valued the voices of students and teachers to a more top-down approach. They further argued that the cuts hurt the morale of an already depleted staff who have had to contend with years of disruption due to ongoing construction and the pandemic.

“All is not not right in the Winooski School District,” high school teacher Annie Schneider said at the meeting. “I’m talking about a culture where teachers and students are isolated from information, where we're not being taken care of, or taken into account, by our administration.”

Math teacher Maeve Poleman said it was “disheartening that, at a time when our students need the most support we can possibly provide, we’re taking it away.”

Two days before teachers appealed to the board, Winooski middle and high school students staged a walkout to protest the cuts.

Board members didn't take any action at the March 9 board meeting. But they voted Monday to reinstate Andrews and Duggan, and asked administrators to present recommendations about how to budget for the cost of the their positions — around $172,000. Options include cutting other positions or dipping into the district’s fund balance.


WSD finance manager Nicole Mace described to the board how a drop in enrollment in the upper grades over eight years, plus a need to expand the district's early education program, had led to the decision to cut the positions. Several board members said they felt they had received incomplete information about the impact of budget cuts.

Before the board’s vote, interim superintendent Kevin Dirth, who is helming the district while Superintendent Sean McMannon is on sabbatical, cautioned the board about reversing course.

“You never want to see good people go,” Dirth said. “However, the other side of that is … sometimes superintendents have to look at things from a financial point of view and, whether we like it or not, schooling and education is also a business as well as … an educational institution of learning.”

Dirth also questioned whether reversing the cuts would be going against the will of the voters who approved the school budget on Town Meeting Day.

In a statement released Friday, Dirth said that people who created the budget had "good intentions," though he acknowledged the process "wasn't as smooth as it should have been." He will focus on "repairing harm and rebuilding trust" between the administration and the board, he wrote.

Winooski school librarian Matt Gile, who is also president of the Winooski Education Association, said the board's decision to restore Andrews and Duggan’s positions was proper.

“We are overjoyed that the Winooski School board listened to its faculty, students, and community,” Gile wrote in an email on Wednesday. “The decision demonstrates the school board’s commitment to prioritizing the needs of our students in this trying time, and points to the power of organizing and standing up for our students — and each other.”