Winooski Kicks Off Its Centennial Celebration With Events and Exhibits

New England is full of former mill towns. While the towns themselves have mostly survived, many of the mills have become decrepit remnants of a bygone industrial age.

During periods of urban renewal in the 20th century, cities around the U.S. saw the value in preserving such historic buildings, repurposing the massive structures as retail and residential hubs. Winooski's Champlain Mill, a former textile producer, was slated for demolition in the early 1970s — but it still stands today as an anchor of the city's revitalization efforts.

The mill features prominently in the Onion City's centennial celebration, which commemorates Winooski's incorporation in 1922. Organized by the Centennial Celebration Committee, the Heritage Winooski Mill Museum, the Winooski Historical Society and others, the string of events and exhibits kicks off on Sunday, March 6, and continues with activities into the summer. They include a self-guided historic walking tour, Winooski-themed documentaries airing on Vermont PBS, historical exhibits, a portrait gallery, community parties and a panel discussion centered on a particularly unusual slice of Winooski's history.

Read on for a preview of a few of this week's events, including a retrospective of the Champlain Mill mall, a citywide photo exhibit and the true story of the infamous Winooski dome.

Longtime Chittenden County residents likely remember when the Champlain Mill was a boutique shopping mall. Opened in 1981, the experimental venture was the brainchild of developer Ray Pecor Jr., then owner of Lake Champlain Transportation.

"Everyone talks about how wonderful [Pecor] was as a landlord," historian and educator Erica Donnis said on a call with Seven Days. "[He] really looked out for the small business owners and was really interested in mentoring folks who were just starting out."

The Heritage Winooski Mill Museum brought in Donnis, who works as the special collections director at Champlain College, to help research and curate "Mill to Mall: Historic Space Reimagined." The exhibit includes crowdsourced artifacts and memorabilia from the mall era and a historical timeline of the mill. It documents the building as it transformed from a manufacturing facility to a mall to a tech hub in the early 2010s.

As a mall, the Champlain Mill housed several shops that were precursors to other prominent Vermont businesses. They include the Book Rack and Children's Pages, whose owners, Renee Reiner and Michael DeSanto, later opened Phoenix Books; and Anne and Ted Castle's Chessy's Frozen Custard, the birthplace of Rhino Foods. The mill was also home to Green Mountain Coffee Roasters' first expansion from its original site in Waitsfield.

The exhibit extends the mission of the Mill Museum, which opened in the mill in 1998. "When the Mill Museum first opened, a lot of people contributed their memories ... about when they worked in the mill," said Miriam Block, the museum's executive director, by phone.

Since then, fewer and fewer people remain with direct ties to the mill's heyday, Block said. The new exhibit explores the building's next generation of shopkeepers and patrons.

The exhibit also ties in to the greater issue of historic preservation.

"How do we maintain our historic fabric in a way that's going to be sustainable over time?" Donnis pondered.

On display at the Heritage Winooski Mill Museum and at various locations around Winooski, beginning on Sunday, March 6, legacy.winooskivt.gov/100faces

Winooski is one of the most diverse places in Vermont. Though the city itself is predominantly white, it has the only majority-minority school district in the state.

To showcase the city's heterogeneous populace, the Centennial Celebration Committee and the Mill Museum commissioned a series of portraits of residents to be displayed at businesses around the city, as well as the Mill Museum and online.

"The city's theme for this whole campaign is welcoming and opportunity," Block said. "Sometimes, people ... get stuck in their own little community. [The series] represents that we all have a voice within the community."

For "100+ Faces of Winooski," Winooski photographer Daniel Schechner created full-color images in the fall of 2021. They will be mounted in the windows of shops and municipal buildings downtown.

Block noted that the images will be visible from the street. This cuts down on indoor traffic while COVID-19 is still spreading through communities, she said, but also makes the work truly accessible.

"You don't have to go into a gallery with specific hours," Block continued. "You can see them at your leisure." 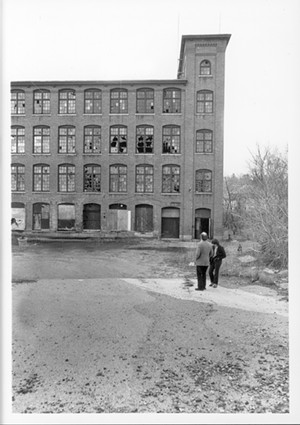 During the energy crisis of the late 1970s, the City of Winooski proposed an idea that seemed like something out of a sci-fi novel: a giant dome covering the city that would, somehow, help its residents save on energy costs.

But how, exactly, would this have worked? Would residents have had to pass through some kind of air lock? Would cars have been allowed inside? Would wildlife have been trapped under glass?

To dispel some myths about the dome, the Winooski Memorial Library and the Heritage Winooski Mill Museum teamed up to present "Winooski Dome: Uncovering the Real Story." The virtual panel discussion features Mark Tigan and Brendan Keleher, members of the Winooski Community Development Corporation at the time of the dome proposal, as well as architect John Anderson, who created illustrations of the proposed dome. Anderson's colorful renderings envision the city as a futuristic utopia.

"I think it was a unique time in our country in terms of rising energy costs and thinking about novel ways to address those," Winooski Memorial Library director Nate Eddy said by phone.

Aside from being a fascinating proposition, the failed proposal provides a window into the way people thought and what they were open to only a couple of generations ago.

"It's really bizarre," Eddy continued. "While the novelty, I think, was a blip of that time period, I don't think it was out of bounds to at least look at the potentials of creating this physical dome structure over a city."