Winds of November: Windham, Grafton to Weigh In on Turbine Project 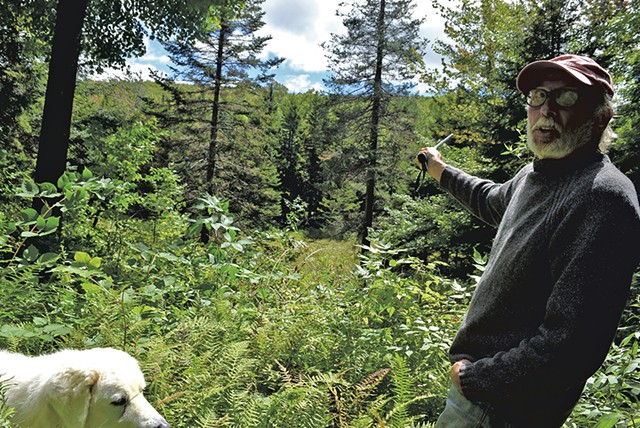 Frank Seawright picked his way through the woods beside his home, showing off a view unspoiled by humans: beech trees where bears dine, a beaver pond and surrounding wetlands. Just beyond them, he pointed out the forested ridge where a 28-turbine wind project is proposed.

Iberdrola, a Spanish renewable-energy developer, plans to build 20 turbines in the town of Windham, where Seawright serves as selectboard chair, and eight in adjacent Grafton.

"This is so glaringly the wrong place," said Seawright, 73, his southern accent softening sharp words about the prospect of wind turbines looming over the two towns on ridgetops owned by Meadowsend Timberlands. "It'll be extremely destructive, in my opinion."

Seawright hasn't kept his views to himself. Debate about the Stiles Brook Wind Project, which has deeply divided both of the Windham County communities, has devolved into a name-calling fight, in which both sides have accused the other of spreading misinformation. The former Grafton selectboard chair quit after receiving threats. Online commenters have used the word "rape" to describe the project. Iberdrola's Vermont lobbyists received an email saying they should be "hanged."

Wind projects routinely face local opposition around the country, but this one stands out, said Art Sasse, spokesman for Iberdrola. "We don't normally encounter the kind of divisive, visceral tone and tenor that seems to be present," he said.

Trying to counter the "myths" with "facts," Sasse penned a guest column for the August 18 Rutland Herald. "Voters in Grafton and Windham should be aware of the falsehoods spread by the individuals and groups that are doing everything they can to prevent an open, fact-based discussion before the vote," he wrote. "It is time for the fear-mongering to end."

There's a good chance that will happen on Election Day. When they go to the polls on November 8, Windham residents will vote on whether the Stiles Brook Wind Project should proceed. Iberdrola has committed to accept what the locals decide.

On the same day, Vermonters statewide will choose between two candidates for governor with starkly different views on wind power. Democrat Sue Minter says the state could use more turbines. Republican Phil Scott favors a statewide wind-project moratorium. Upon taking office, the new governor will appoint a commissioner of the Department of Public Service and choose a new chair of the state Public Service Board, which permits projects.

Taken together, the two votes could potentially clarify Vermont's position on wind power.

"What's going to happen with Windham and the Vermont governor's race are two crucial pieces to the puzzle," said Ron Pilette, Grafton Selectboard chair, who opposes the project.

"Referendum is too strong a word," said Steve Terry, a retired Green Mountain Power executive who helped develop the utility's 21-turbine Lowell Mountain project. "It will be another straw in the wind as to where this issue is going."

The largest wind project in Vermont would be in two of its tiniest towns: Grafton has 678 residents; Windham, just 418. Both communities are havens for retirees and owners of second homes looking to get away from crowds or to ski and still be within an easy drive of Boston or New York. Vacation homes make up more than half the tax base.

"If this thing goes through ... we can kiss our tourism industry goodbye," said Pilette, whose town features a well-preserved idyllic New England village center that includes the historic 45-room Grafton Inn owned by the nonprofit Windham Foundation.

In Vermont, communities cannot veto energy projects. The state Public Service Board can consider a town's view, but the board is charged with giving priority to the overall public good. Nevertheless, Iberdrola has agreed to abide by votes in Windham and Grafton, claiming it doesn't want to build where it isn't welcome.

The notion of giving a town power over where to site an energy project is both unusual and controversial.

"It's uncommon outside of New England," said Peter Kelley, spokesman for the American Wind Energy Association, a Washington, D.C.-based trade group. "Elsewhere such decisions tend to be made at the state level and by the private-property owners who want to lease their land."

Not everyone agrees, however, on what constitutes an acceptable vote. Sasse defined it as a "vote of all legally registered voters of a community."

The Grafton Selectboard plans to conduct a community poll that would include owners of second homes as well as full-time residents, possibly by the end of September. Selectboard chair Pilette said he's opposed to holding an official Australian ballot vote until a town plan defines Grafton's views on renewable energy siting. That's unlikely to happen in time for the November election, he said. Pilette said he wants to make sure Graftonites fully understand the tax implications of the project before voting.

Many locals not only want second-home owners to have a say in the matter, according to Lynn Barrett, spokeswoman for the Grafton Woodlands Group, which formed to oppose the 28-turbine project. It wants the town — not the developer — to decide how to conduct its vote. Iberdrola favors the private Australian ballot over anything that includes property-taxpayers who aren't registered to vote in Vermont. "The thought is, Who the heck is this company to tell us what kind of vote we can have?" Barrett asked.

Grafton's unwillingness — at least, so far — to hold an Australian ballot vote of only local registered voters muddies the waters. Asked what Iberdrola will do if Windham votes no and Grafton hasn't voted, Sasse said, "Good question ... We would like votes in both."

A community vote worked for Green Mountain Power as it developed the 21-turbine Lowell Mountain project. In 2010, Lowell residents voted 342-114 for the project. In 2014, after the turbines were operating, residents reaffirmed their support with another vote.

Terry, the retired Green Mountain Power executive, said one of the keys to the local approval was chief executive officer Mary Powell's pledge that the utility would honor the local decision. Another was the financial package offered to Lowell and surrounding towns, he said.

In Windham, the developer has offered $715,000 a year, which virtually covers the town's budget. Grafton, where fewer turbines would be installed, would get $285,000. The amounts were calculated based on earlier Vermont projects, including Lowell, Sasse said.

Seawright said he expects that Iberdrola will sweeten its offer between now and November to win support. Sasse indicated Iberdrola is open to that. "The benefit package is a work in progress," he said.

If Lowell is any indication, Windham voters can expect to see representatives of the developer going door-to-door and organizing small, almost Tupperware-like meetings, Terry said.

"I got to know all the back roads of Lowell," Terry said, recalling his work there. "People were very polite."

Terry acknowledged, however, that in the ensuing six years, the tenor of the wind debate has changed in Vermont. "The anti-wind lobby has increased its voice," he said.

David Blittersdorf, owner of AllEarth Renewables in Williston who has proposed wind projects in Irasburg and Holland, said the opposition is so misleading he doesn't think he could get a fair vote from community residents. "It's an extremely small amount of people who are extremely vocal," said the man who built the four-turbine Georgia Mountain project. "It becomes a mob."

Opponents argue that their numbers are growing because wind projects are wearing out their welcome. "Since Lowell voted, we understand a lot more than we did," argued Mark Whitworth, executive director of Energize Vermont, a wind-power opposition group.

In Grafton, Barrett's organization has a staffed office, open daily, in the historic former post office.

"This is probably the biggest thing to ever hit Grafton," said Barrett, a former Grafton resident who now lives in Dummerston. "People are concerned."

"I'm in a mixed marriage," said Rep. Carolyn Partridge (D-Windham), a sheep farmer who also chairs the local school board. A liberal Democrat who describes herself as a renewable-energy and wind supporter, Partridge said she's wary of the Stiles Brook Wind Project. Her husband, Alan, supports it. "He says he wants to be part of the future," she said.

She said she was swayed by the fact that more homes would be within 1.5 miles of the turbines than any other in Vermont. She's also been influenced by stories from elsewhere of neighbors unable to sleep because of the sound of the blades.

In Windham, the three-member selectboard is split — two against, one open to the project, according to Seawright, a retired Centers for Disease Control and Prevention analyst who has a solar panel in his backyard. He believes in renewable energy, he said, but fears that the turbine construction would turn docile streams into torrents, destroying the wetlands.

In Grafton, the five-member selectboard has three members opposed and two who are open to the idea.

Cynthia Gibbs, a Grafton selectboard member, can't make up her mind — she supports the plan one day and opposes it the next — but said she's eager for the town to make a decision and move on from a topic that has dominated public discussion for four years.

"It would be good if we didn't have all this controversy," she said.

Will the Windham County vote put the wind-power issue to rest? Not statewide. Whatever happens on November 8, Blittersdorf vowed to continue pursuing turbine projects elsewhere in Vermont.

The Green Mountain State must develop more wind, he said, predicting that some projects will end up in the Champlain Valley.

"I think wind is going to be needed and needed on a scale that is quite large," Blittersdorf said, arguing that the era of fossil fuels is nearing its end. "We, as a society, can't live into the future without renewables ... and wind is going to have to be in the mix."

Correction, September 8, 2016: It was a former Grafton selectboard chair who quit after receiving threats. A previous version of this story contained an error.