Wily Coyote Activists Use Facebook Images of Hunters for Their Cause 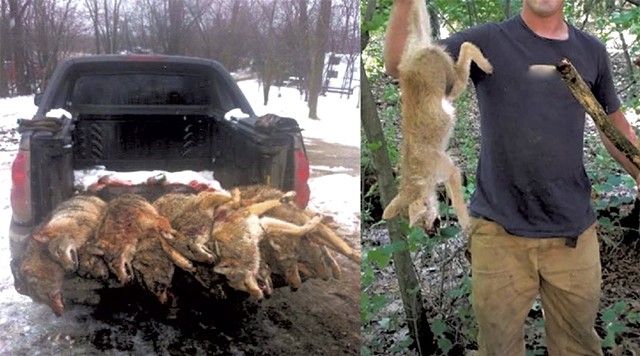 Coyotes roam Diana Hansen's five acres in Craftsbury, where she runs a Reiki healing business from a yurt behind her family's farmhouse, but the shy creatures are a mostly invisible presence. Their yips and howls are "just a nice, beautiful sound to hear," she said.

Then the hounds came. Early one Saturday morning in February, four or five hunting dogs with GPS tracking collars bounded through deep snow, barking and biting as they chased a frantic, bloodied coyote through Hansen's yard. The hounds cornered the wild animal against Hansen's greenhouse. Its tail broken and limp, the coyote ripped and clawed up the side of the enclosure, tearing the plastic walls in a desperate attempt to escape. Hansen saw it run down the road, the dogs just steps behind. She doesn't know whether the coyote survived.

Hansen screamed for the hunters to keep their hounds off her land. "Go ahead and call the warden," she said they replied. "He knows what we do."

The next day, Hansen posted her story on Facebook and tagged two Vermont animal rights groups. "Enough is enough of this disgusting practice," she wrote, vowing to do everything she could to outlaw the hunts. The post was shared widely and, with that, Hansen's unwelcome brush with blood sport became a rallying point in the campaign to end Vermont's open season on coyotes.

That campaign has been largely waged online, where it has been fueled by stories like Hansen's and by images that capture the chase at its most grotesque. Activists have used social media to recast coyote hunting from pastime to perversion, sharing images of cornered animals, bloodthirsty hounds and piles of coyote carcasses that hunters posted proudly online.

"When they see the realities of what's happening, that's what causes people to take action," said Brenna Galdenzi, president of the Stowe-based nonprofit Protect Our Wildlife Vermont.

But hunting advocates say the "realities" that wildlife activists depict online are actually a skewed image of the sport, which they consider an important part of the state's outdoors culture.

Coyotes in Vermont, as in most states, have virtually no protections. They can be killed legally any time of year, in any number, by almost any method. The system works well for hunters, who tend to view coyotes as vermin that threaten the prey sportsmen favor, and whose unregulated killing is a pragmatic part of the rural way of life. In recent years, the species has attracted advocates who see coyotes as a misunderstood predator victimized by state-sanctioned barbarism.

Activists won a small but significant victory in 2018, when state legislators outlawed coyote-killing tournaments that gave prizes to the hunter who shot the most. Vermont was only the second state, after California, to ban the contests. But a subsequent push to enact limits on coyote hunting was rejected by the state's Fish and Wildlife Board in June.

Still, activists believe they've neared a tipping point, citing a photo that prompted fresh outrage — and headlines — last month, when two decomposing pups were strung from a pole along a main road in Bloomfield.

"I think most people are compassionate and are horrified by coyote babies being tortured and hung outside somebody's house," said Jennifer Lovett of the Vermont Coyote Coexistence Coalition.

The Green Mountain State is one of 39 that allow year-round coyote hunting, according to the Vermont Fish & Wildlife Department. The "open season" policy dates back to the late 1940s, when coyotes moved eastward and entered the state from Canada after breeding with wolves. (The eastern coyote, which weighs up to 50 pounds, is larger than its western counterpart.) For decades, they were treated as threats to livestock and subjected to extermination campaigns.

The species remains poorly understood by the general public. A Vermont pro-hunting online petition with more than 10,000 signatures is peppered with calls to control their numbers so coyotes don't harm populations of game, especially deer. It's a double misconception, according to state wildlife biologist Kim Royar. While coyotes do sometimes take fawns, Royar said, research from other states has shown that they target prey that wouldn't otherwise survive to maturity, meaning the effect is minimal.

Plus, hunting coyotes to control their population just doesn't work. Coyotes have thrived nationwide despite relentless hunting, thanks to wily adaptations that stimulate breeding when a family group is threatened. Wildlife officials estimate that about 7,500 coyotes live in Vermont, a number that is unlikely to change substantially regardless of whether humans hunt them.

So what purpose does an open season serve? In 2017, state legislators asked Vermont Fish & Wildlife to explain its rationale, which resulted in a 16-page report penned by Royar. The report's controversial, scientifically untested conclusion: Even though hunting coyotes doesn't aid in population management, it may help keep the animals wary of humans, reducing conflict.

"Biologically, we do not have a coyote problem. What we have is a social problem," Royar said in an interview last week, referring to the "polarizing" debate over coyote hunts. While some hunters are misinformed about their ability to reduce coyote populations, Royar said, activists' focus on hunting policy also misses the far larger role that preserving habitat plays in the species' health.

Activists contend that unregulated hunting actually increases coyote conflicts with humans, pets and livestock because it destabilizes family groups. But their outrage is also a moral one. Galdenzi criticized the state agency for being "complicit in these acts of reckless killing." She described hunting coyotes with hounds as legalized "dog fighting" and likened stringing up their carcasses to "lynching." If state officials cared about countering the "culture of intense loathing and hatred of coyotes," they'd do more to educate hunters about their misperceptions, she said.

Instead, Galdenzi accused Vermont Fish & Wildlife of coaching hunters to take the sport "underground." She pointed to a 2016 department newsletter that includes tips for how to pose photos of a kill so they can't be used without permission to "give non-trappers a negative view of regulated trapping."

Commissioner Louis Porter said his department put a similar message in a more recent publication to remind hunters that their online photos shape perception of the sport. The article's first suggestion: "Display respect for the animal in its life and in its death."

"I think people should always be aware of how their social media activity reflects on what they do and who they are," he said.

The effect of social media on the coyote debate was front and center at the June meeting of the Fish and Wildlife Board, when members ultimately rejected a petition to limit coyote hunting.

"I feel like bad hunter behavior is responsible for the polarizing emotions that we have," Caledonia County appointee Johanna Laggis was quoted on VTDigger.org as saying before she voted against new restrictions. "...Too bad we can't legislate the use of social media, but we can't."

In an interview with Seven Days, Laggis said she was lamenting how viral images of unethical behavior have come to represent all hunters. "I personally feel like any hunting where you are bragging about killing something or torturing something isn't really necessary to do," she said. Most hunters don't, Laggis added, and regulating coyote hunting is unlikely to stop the small minority who do.

The coyote coalition last year submitted to the legislature a montage of Facebook photos and comments that showed coyote hunters' gleeful attitudes about their kills. One showed hound dogs surrounding a coyote that had fallen through ice. Several others depicted carcasses stacked in the beds of pickup trucks. Activists scour the social media platform to uncover the posts. Some use fake accounts to infiltrate hunting circles — a kind of "espionage," Lovett said.

But the posts have become harder to find, as hunters fear becoming targets of online harassment should their photos end up on the coalition's page.

Mike Covey, president of the Vermont Traditions Coalition, said the coyote activists are "beyond disingenuous" in their portrayals of the sport. "If you whip people's emotions up, they don't pause to consider the facts. The fact is that one individual did a distasteful act that nobody supports on any side of the coin," he said, challenging Protect Our Wildlife to prove that the images of truckfuls of coyote carcasses were taken in Vermont, by Vermonters. Porter said he's found one instance when activists used a photo from outside Vermont.

Covey and the commissioner also agree that it's wrong to view the killing of coyotes as wasteful, even when their pelts aren't used, because the activity still serves as a way for sportsmen to connect with nature.

"The argument that the only reason to hunt things is for meat, I don't think, appreciates the full breadth of why people hunt," Porter said.

One of the images that activists circulated online recently was a screenshot of a Vermont hunter's Facebook post that showed a pile of at least nine coyote carcasses. Seven Days contacted the hunter whose name appeared on the post. The man, unaware that his name had been circulating, asked the newspaper not to identify him because the "antis" had harassed his friends with death threats.

After agreeing not to identify the man, a reporter sent him the Facebook post with his name on it. Was the photo of so many dead coyotes his? The hunter didn't respond.

The original print version of this article was headlined "Tracking Coyote ... Killers | Wily wildlife activists use provocative Facebook images to promote their cause"