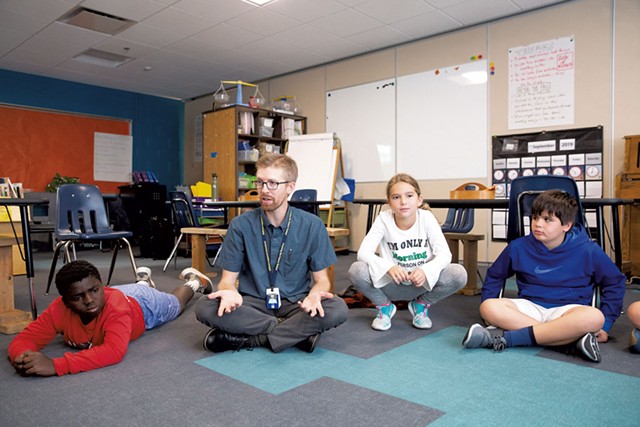 Michael Kellogg remembers a nugget of knowledge he heard from a man he interviewed at the Champlain Senior Center: "Problems aren't problems. Problems become your experience of the world."

Kellogg teaches third and fourth grades at Williston Central School. With support from the Vermont Folklife Center, he and former VFC staffer Mary Rizos have been conducting interviews at the senior center all summer as the first part of a project funded by a Burlington City Arts grant. Spearheaded by Kellogg, it evolved from work he did with his students on storytelling and interviewing.

Kellogg relayed the phrase on a recent morning in Burlington as he explained the motivation behind the project's second phase: a live storytelling event called Cedar: An Evening of Interactive Storytelling, Music and Food, to be held at Main Street Landing Performing Arts Center on Saturday, September 14.

When people hear the phrase "live storytelling," they may think of events like the Moth that feature rehearsed storytellers onstage. Cedar is different. First, staff from the Middlebury-based VFC will lead a workshop on the nuts and bolts of ethnography and how to listen with the goal of understanding someone else's perspective.

Next will come a musical interlude from Kellogg's ensemble Clyde Powers, featuring electronic sounds and some a cappella compositions. (In case all that listening sounds like it could be tiring, there will also be multiple snack breaks.) Finally, attendees will have the chance to enter a "story booth" where they can share and record their own stories.

While Kellogg hopes the entire event will create a space that allows people to be vulnerable, he said, the story booth is a physical manifestation of that space. The booth will accommodate small groups, who will find prompts painted on the wall that encourage storytelling. Kellogg said participants can decide what happens to any recordings of their stories.

He further hopes that the VFC workshop and the presence of an intimate space will provide people with the opportunity to share their knowledge and experience with others. "In life, how many times do we have things that we think, and yet it's hard to create that space to really engage in that conversation?" he said.

"Kids who know more about their families... tended to show higher levels of emotional well-being." Michael Kellogg tweet this

Two years ago, Kellogg hit a turning point when he was nominated for Vermont Teacher of the Year. Though he didn't win, he recalled, the experience gave him an opportunity to think about what his students needed most. At the same time, he was experiencing health problems that he attributes to "secondary traumatic stress" from work — or the emotional toll of caring for children who have undergone trauma.

"I didn't understand how bad it was until it was really bad," Kellogg said. "I did not have the tools to manage my own care." But he found that opening up to his family and support system about his experiences helped him heal.

Looking for ways to help his students handle life's curveballs, Kellogg came across a study from Emory University called "Do You Know...: The power of family history in adolescent identity and well-being."

The researchers examined the evidence that, as they wrote, "narratives of one's own personal experiences are critical for identity and well-being." People who have "coherent and emotionally expressive narratives" about stressful times in their lives are less likely to exhibit depression or anxiety, they theorized. And those stories, when told by family members to children, help kids build their own life narratives.

"There's a correlation here. Kids who know more about their families ... tended to show higher levels of emotional well-being," Kellogg said. "And if that correlation existed, I think the question that I found myself wondering was Could I create a unit in my classroom with my kids to interview their moms and dads to facilitate that or encourage that?"

He attended a summer professional development course and then spent two years experimenting with storytelling and interviewing units in his classroom. One year he had children interview their parents, and the next year the students interviewed each other. But he wanted to take the idea bigger.

"If this is true for families, if families see these benefits, can we see emotional well-being in communities?" Kellogg asked. "Can neighbors experience this? Can colleagues? Can coworkers? Can friends?"

He imagines that by encouraging event attendees to share the stories of their lives with fellow community members — in the story booth or in the weeks and months after the event — the project could foster connection and render the entire community more resilient.

Kellogg received $1,500 from BCA in July, which funded his interviews at the senior center, the Cedar event and the construction of the story booth.

One question he keeps coming back to is a simple one: Do you know the source of your name? A name can illuminate plenty about a person's background, including ethnicity, religion and family traditions and values.

Kellogg knows the origin of his own name, though it's pretty simple — his parents just liked "Michael." Talk to him for more than a few minutes, and you're likely to get that question turned back on you: Do you know?