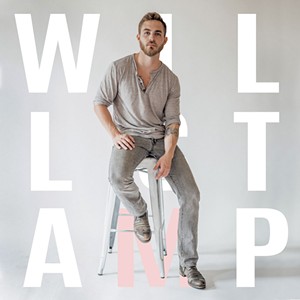 In 2017, Burlington singer-songwriter Will Stamp released his debut EP, That Old Familiar Heartbreak. Its six songs were graceful, understated alt-country meditations on loss.

On his first full-length effort, released September 6, Stamp's approach seems to be "go big or go home." At its best, the self-titled record is bold; at its worst, busy.

"It may feel like a tiny drop in a vaaaast ocean of music, but boy did I bust my butt writing, recording and mixing this record," Stamp wrote in a Facebook post on the album's release day. The labor, which Stamp says took two years, is certainly impressive. Where he fell short is in editing.

There's a lot going on in most of the 11 songs. On "Life Is Beautiful," for example, he stacks handclaps, squealing electric guitar and soaring, Queen-style background vocals. I wish he had instead focused on one standout detail.

Musically, Stamp mainly cruises in the pop-rock lane while pulling in elements of country, gospel and R&B. He showcases his multi-instrumental chops by performing all parts himself, aside from live drums played by J Bengoy's Ryan Jory.

On That Old Familiar Heartbreak, Stamp's singing was beautifully restrained. Here, it's fun to hear him experiment with his voice. He achieves a playful Elvis Presley vocal styling in the chorus of "Not Good Enough," a high falsetto on "Hard to Please" and an aching wail on "A Message." There's even a Michael Jackson-esque "Hee! Hee!" on "Something to Say," an ominous-sounding song from the viewpoint of a suspicious lover.

Stamp's lyrics are confessional, and sometimes he overshares: "'We just can't do this anymore' is what she said to me / Clothes still strewn across the floor as she got up to pee." Postcoital urination? TMI, dude.

But in other instances, the details he offers draw the listener into an intense emotional world. In "Summit St.," one of two holdovers from his previous release, Stamp sings about a cold-weather stroll with a new squeeze. He notes "An inch of ice on the car-top case / Breaking into a frozen safe." If, by chance, a reviewer were to hear this lyric as her own personal winter of the heart had started to thaw, the image could bring a tear to her eye. Or so I'm guessing.

"I haven't always been subtle, but I've told the truth," Stamp sings in "A Message." If one line could capture the album's essence, it would be this. Even if Will Stamp is slightly askew, it feels fearless. The thing about fearlessness is that it begets new beginnings. So go big, Will, go big.

Will Stamp is available on all major streaming services.