Will Stamp, 'The Happy Birthday EP' 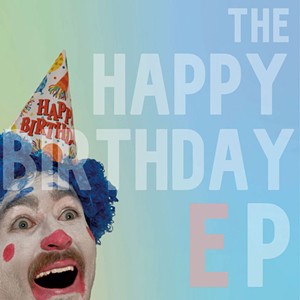 Will Stamp's sound noticeably progressed between the release of his 2017 EP That Old Familiar Heartbreak and his 2019 self-titled, full-length follow-up. He traded the folksy, Jeff Tweedy-esque acoustic fare of his debut for the slicker, poppier side of alt-country. And now, eight months after the release of Will Stamp, the singer-songwriter has unveiled a new offering called The Happy Birthday EP. The four-song recording extends his grander, shinier inclinations — though it doesn't augment them.

Presentation has been a noteworthy aspect of Stamp's music career. The tone of his cover art shifted between his first and second offerings, from a misty landscape to a crisp, full-body portrait. The latter shot features Stamp slouched on a stool in front of a white cyclorama, like it was plucked from the men's section of madewell.com. The art for his 2019 single "Not Good Enough" features the artist prone on a low-tide beach, clad in a white A-shirt, Daisy Dukes and cowboy boots. It could easily be a still from the first two minutes of a gay porno. Stamp clearly wants to titillate his listeners, which is within his rights.

But the cover of The Happy Birthday EP is troubling. Stamp, dressed as a manic clown, peeks into the frame wearing a pointed party hat, white face paint and curly blue wig. Coulrophobia plagues children and adults alike, so why put a clown on your work? It's bizarre, especially because it does not match the EP's music.

Looking past the cover image, The Happy Birthday EP is a brief and pleasant listen. As Stamp points out in an email, he's a storyteller, and his songs have a coherent narrative flow. Relatable tales of lost love and heartbreak fuel his songs, as in the chill yet bouncy opener, "Vancouver."

Rich with harmonies, background vocals and a noodling synth line that punctuates Stamp's clean acoustic guitar, the first tune succeeds in establishing the overall mood. Romantic memories consume his thoughts, yet they don't destroy him.

However, he comes off a bit more devastated on "Part of Me." A warm, cascading assemblage of voices cries out with urgency over dampened piano and soft beats.

"Blame," a vaguely tropical number with mellow shakers and percussion, shows off Stamp's vocal range and control, both of which are quite impressive. The song implies that all insecurity, be it professional, psychological or romantic, stems from the same place.

Closer "Gone (Running Away)" is slow-dance fodder that grows more intense as it progresses. A little bit shoegaze, a little bit power ballad, it ends the EP on a sweet, determined note.

Stamp's imagery and songwriting can feel disconnected, but his recordings are pristine and well put together. He's bound to continue to please his current fans, even if his latest EP doesn't break new ground.

Speaking of Will Stamp, The Happy Birthday EP