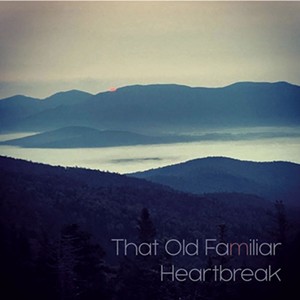 Whether it comes in the form of a breakup, a damaged friendship, a departed pet or the end of a bad habit, loss is an inevitable fact of life. It's also a theme that threads through Vermont singer-songwriter Will Stamp's debut release, That Old Familiar Heartbreak, a collection of six country-tinged acoustic tracks.

The former University of Vermont student sets the tone on the album's first cut, "Homework." Singing over acoustic guitar, Stamp claims, "You could get rich from these fountains / Collecting the pennies I've thrown / From wishing that I'll sleep beside you again / And this ache in my stomach was gone." The lyrics here flip-flop between relatable observations that hint at a bigger story ("I wish I was doing your homework / Cross-legged on top of your bed) and alt-country platitudes ("This Tully's got me seein' double").

If the booze reference feels played out in "Homework," it gets teeth in the sobriety ditty "The Sailor." Stamp gives voice to a narrator who has let his or her health and friendships fall away in favor of the drink: "Empty stools replaced my friendships, unpaid tabs at every door / So I stumbled to the next one evermore."

It's never a good sign when a listener asks, "Wait, didn't this song play already?" Stamp wisely gives a change of pace by placing "Gas Pump Epiphany," a moody number with synth-y undertones, in the middle of the EP's otherwise acoustic offerings. Telling the story of a hard-time family, the song juxtaposes rural North Country references with modern-sounding music — and a dramatic narrative twist.

The Burlingtonian keeps it local in "Summit St.," an ode to a former flame and their old Queen City haunts. Stamp goes gospel, pleading, "Deliver me to Summit St." over soulful organ sounds.

The goodbyes go on in "Good Boy," a tear-jerking farewell to man's best friend, which gives way to the melancholy closer "Running Away."

Though he uses the phrase "alt-country" when describing his songs, Stamp doesn't sing with an affected twang — a maddening trait that sometimes comes with the genre. Rather, he delivers an easy-on-the-ears tone that sounds natural and effortless. He also plays all of the instruments on the EP, which was mastered at Lane Gibson Recording and Mastering in Charlotte.

Stamp wrote, recorded and mixed That Old Familiar Heartbreak last spring and summer while couch surfing in Burlington. That he made this album with no home base seems appropriate for an effort that's so much about being without. If Stamp or his characters have suffered casualties, he's spun them into a rich collection of songs.

That Old Familiar Heartbreak is available on iTunes, Spotify and CD Baby.

Speaking of Will Stamp, That Old Familiar Heartbreak