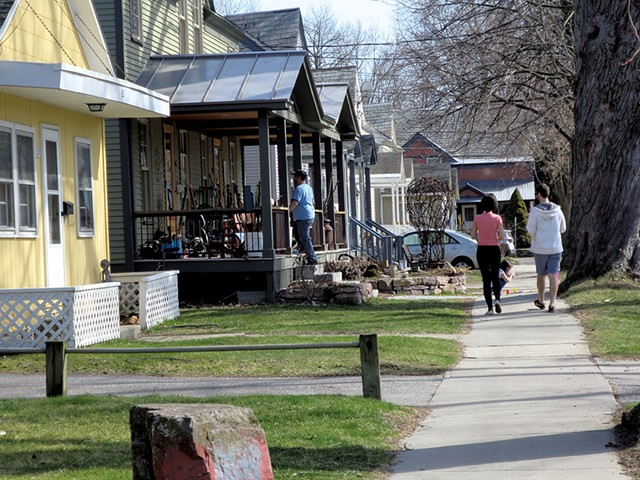 On a cloudless Sunday afternoon in early April, a group of about 50 gathered at the St. John's Club, a squat brick building on the shore of Lake Champlain just south of the Burlington breakwater. Piling baked beans and eggplant lasagna onto plates, they chatted about knee surgery and summer vacation plans. Young mothers drank Dirty Mayors while children climbed from lap to lap. An elderly woman in periwinkle blue beamed when a brown-haired girl, her neighbor, ran over for a spontaneous embrace.

The potluck had all the trappings of a family reunion, but it was geography, not genes, bringing this crowd together. They live in Burlington's Lakeside neighborhood, a collection of 80 or so homes and apartment buildings in the South End. Set apart from the rest of the city by railroad tracks, this historically blue-collar community has been happily hermetic for more than 100 years.

"It's a small-town neighborhood in a big city," said George Thabault, a resident of six years.

That sense of intimacy may change as the South End — once an industrial wasteland, now a thriving arts and business district — develops on the other side of the tracks. Residents are bracing for the rumored departure of one of their oldest neighbors, an oven factory, and the construction of the Champlain Parkway, which will pass nearby.

Lakeside was once known as the best-kept secret in Burlington. With the railroad as a barrier to the east, an oil tank farm to the south and Lake Champlain to the west, the only way to enter this quiet enclave by car is from Lakeside Avenue, which dips underneath the tracks.

Despite several beautifully restored houses with spacious backyards that extend to the water's edge, Lakeside retains a working-class feel. Closer to the tracks, lower-income people rent apartments in tenement buildings that range from well-kept to worse for wear. At the center of the neighborhood, century-old duplexes face a park with a basketball court and a playground — an ideal arrangement for front-porch spectating.

Lakeside owes its existence to the Queen City Cotton Company, which began to build the neighborhood in 1894 to house some of the 600 people who worked in the brick mill that is now the Innovation Center of Vermont. More than 100 French Canadian families lived in the duplexes — which rented for $1.80 a week — and apartment buildings. With two grocery stores, a barbershop, a billiard hall and a park with a baseball field, the neighborhood was practically self-sufficient. Workers congregated at the St. John's Club, a member-owned social club, then located above a store at a different location.

When the cotton mill closed in 1937, many employees stayed put. The company gave them the option to purchase their homes for what a company flyer advertised as "very reasonable prices on very liberal terms."

Some residents later went to work for the weapons manufacturers that cycled through the factory, including General Electric and Lockheed Martin.

When Blodgett Ovens moved to the northern edge of Lakeside in 1945, it, too, employed people living next-door. The company's sprawling single-story facility continues to crank out ovens on that prime piece of waterfront real estate.

A handful of descendants of the original Lakeside residents still live in their family homes. Nancy Sicard, whose mother and aunts worked at the cotton mill, is among them. She lives in a petite white house with a matching picket fence — the home in which her late husband grew up. The inside is immaculate, decorated with lace doilies, potted ferns and photographs of her eight grandchildren.

The 79-year-old recalled life during the factory era with fondness. "It felt like one big family," she said, with evenings spent watching baseball in the park or lingering on porches, often a venue for impromptu concerts. With two rockers on her porch, Sicard carries on the stoop-sitting tradition.

Terry Bickford, 69, is another Lakeside lifer whose grandparents emigrated from Canada to work at the cotton mill. She remembers an idyllic childhood, in which kids were treated to cakes that Blodgett workers baked to test new ovens.

Both women noted that people used to refer to Lakeside as being "on the wrong side of the tracks" — an epithet the neighborhood saw as too misguided to be offensive.

While it remains less upscale than other waterfront communities, the neighborhood has gradually become coveted real estate. Gone are the days when it functioned as one big French Canadian family — "I don't see that ever coming back," Sicard said matter-of-factly.

Lakeside began to lose some of its insularity when, during Sen. Bernie Sanders' (I-Vt.) tenure as mayor, the city built the Burlington Bike Path, which passes through it. In clement weather, there's a nearly steady stream of cyclists and joggers, often headed to Oakledge Park just around the corner. 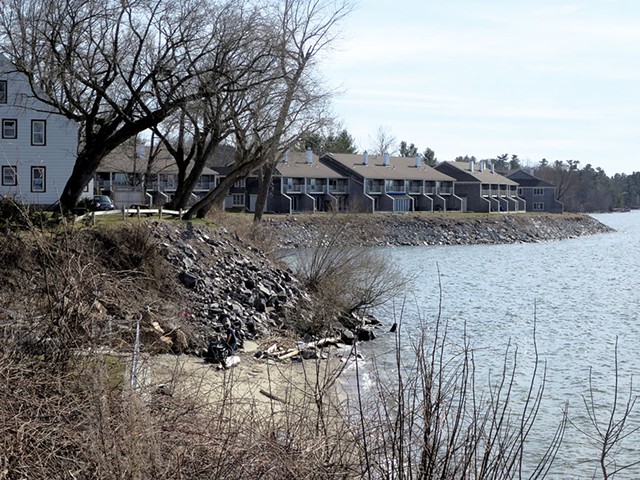 Run-down duplexes began attracting people like Joan Shannon, now a city councilor and real estate agent. In 1994, she and her husband converted one into an attractive single-family home, painted yellow, keeping the two front doors intact. During the factory era, a family with 15 children occupied one half of the building.

These days, residents say passersby regularly ask if there's anything for sale. "Everyone wants to live on the lake," Bickford said.

Interest in Lakeside property will likely escalate as the South End continues to grow and change.

Nearby Pine Street boasts the highest concentration of breweries in the city. Lakeside Avenue has also been transformed. Rebranded as the Innovation Center, the former cotton mill now hosts businesses including a Pilates studio and a software company. Champlain College set up its Emergent Media Center in a modern building nearby. PlanBTV South End, a city document meant to guide future growth, suggests that the sprawling parking lots south of Lakeside Avenue are ripe for redevelopment.

Lakesiders are protective of their "diamond in the rough," said Shannon. "I don't think those of us who live here particularly want it to gentrify — even those of us who have, maybe, gentrified it."

The preservation-minded councilor pointed out that the entire neighborhood is on the National Register of Historic Places, meaning that the Queen Anne and Colonial Revival-style houses cannot be razed to make room for luxury condos.

People could get priced out of the current housing stock, however. "I think there's a lot of pressure on the affordability aspect of Lakeside," said Thabault, who was an aide to mayors Sanders and Peter Clavelle. He noted that a four-unit apartment building, which sold for $450,000 in 2011, just went on the market for $750,000. Investors might be tempted to convert the property to high-end rentals or condos.

But for the most part, residents don't seem worried that Lakeside is about to become a hipster haven or yuppie utopia.

"All the people I have met who moved into the neighborhood are awesome," said Debra Viens, who grew up in Lakeside and now rents across the street from her mother.

Newcomers seem to share a small town sensibility and appreciation for Lakeside's history. "The whole idea of Lakeside is reassuring because you're stepping back in time," said John Caulo, an associate vice president at Champlain College. After he spotted a waterfront duplex for sale during a run in 2012, Caulo and his wife bought the place, gutted and rebuilt the inside, and moved in. "What appeals to me about the neighborhood is that it's just that — a true neighborhood."

One looming unknown that does worry Lakesiders is what will happen if Blodgett sells its shoreline factory. Known for pioneering the commercial pizza oven, Blodgett is Burlington's oldest manufacturer, but few people believe it will stay in the neighborhood much longer. Illinois-based Middleby Corporation purchased the company in 2001 and also owns a large plant in Essex. Rumors that Blodgett will relocate to the suburbs have intensified in the last year.

Mayor Miro Weinberger "understands that Blodgett's needs are evolving and may not be a good fit for that site going forward," said his spokesperson, Jen Kaulius. PlanBTV South End assumes as much, suggesting the site could be redeveloped to host "businesses, creative enterprises and/or housing."

Asked whether Blodgett had plans to move, vice president Gary Mick said, "none at this time" and declined to say more.

Next door, the St. John's Club plans to stay put. Like the rest of Lakeside, it's remained humble, despite becoming popular among prominent people from outside the neighborhood. At the end of the workday on April 13, Attorney General Bill Sorrell sipped a glass of white wine at the bar. Toward the back of the room, a group of five regulars unpacked their tool caddies and began tying flies, deftly winding tinsel, peacock feathers and elk hair around hooks.

Manager Ken Ploof, who has worked at the club for 21 years, poured libations behind the bar.

He would not object to housing or new businesses replacing the Blodgett factory, but "200 condos would make a big difference" in the neighborhood's character, he added.

"That would be horrible," said Viens, predicting "too many people in the neighborhood and too many cars trying to get in and out."

Ploof's main concern is parking — an increasingly rare commodity in Lakeside. For years, Blodgett has let the club, which now boasts roughly 1,500 members, use its parking lot during evenings. If St. John's lost that privilege, it would be unable to accommodate its many out-of town members. That's a worry for residents, too, who already find themselves competing with club patrons for on-street spaces.

What happens just outside Lakeside also stands to affect the neighborhood. Residents are excited about some of the impending development — when City Market/Onion River Co-op builds its second store off Flynn Avenue, they will once again be within walking distance of groceries.

They are more ambivalent, however, about having a major road pass nearby.

Weinberger has pledged to build the long-contemplated Champlain Parkway, which would carry interstate traffic en route to downtown Burlington through the South End. The Parkway will end at Lakeside Avenue, depositing cars on residents' only route in and out of the neighborhood.

The city doesn't expect to start construction until 2018, but residents are already bracing for a potential bottleneck. "That's the big question on my mind," said Shannon, who's not confident that the city will be able to accurately forecast the traffic impact. "The challenge is we don't have an answer until we build it. It's left to everyone's imaginations."

At the St. John's Club potluck, old-timers and newcomers spent more time sharing Lakeside lore than lamenting possible changes. The gathering was a send-off for Thabault and his wife, Candelin Wahl, who are giving up their rental to buy a house in St. Albans because they couldn't find a permanent home in Lakeside. For the last six years, Thabault meticulously maintained the neighborhood ice rink, sometimes shoveling sludge off at 2 a.m. to keep the surface smooth. Wahl was known for supplying skaters with rink-side hot chocolate.

"Why are you leaving us?" Sicard teased Thabault when he came over to her table to deliver a bowl of potato chips.

"You can only stay in paradise so long," he told her.