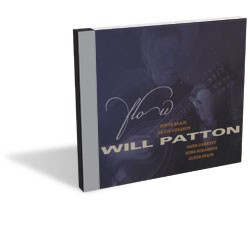 In a handwritten letter sent to Seven Days introducing his new record, Flow, Will Patton cheekily describes the album as “the latest installment in my get rich slowly scheme.” While it’s unlikely the album will significantly line the veteran mandolinist’s coffers, it does offer listeners a bounty of musical treasures and adds yet another milestone to the local gypsy-jazz guru’s impressive career.

“Le Marais” is the album’s first Patton-penned tune. The breezy cabaret waltz features a fine guest turn from the bandleader’s daughter, Anna Patton, on clarinet and a series of nifty runs from guitarist Dono Schabner.

“Waltz for Anna” is a gorgeous ode to Patton’s daughter. The tender, bluegrass-tinged ballad is highlighted by Jim Pitman’s weeping dobro, which gracefully bends and curtsies around Gusakov’s violin — or fiddle, in this case.

Sonny Stitt’s “Bebop in Pastel” is next and jolts the listener to attention in a jazzy flash of herky-jerky guitar and mando runs.

“Sampa” is described as a “family affair” in the album’s liner notes, and again features Anna Patton on clarinet, as well as Will Patton’s wife, Deb, on shaker. It’s a nice reimagining of Caetano Veloso’s classic.

Following two more Patton originals — “Big Dawg” and “November” — as well as a version of Duke Ellington’s “Daydream,” Flow closes with Ninine Garcia’s “Caporal Swing.” Patton recorded the tune with Garcia in a Paris studio, and it fairly bursts with jubilant, hothouse appeal. Flow may not make Will Patton a wealthy man. But local jazz fans will be richer for having heard it.

Will Patton plays Leunig’s Bistro in Burlington this Friday, June 10.