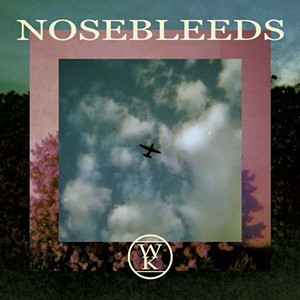 Will Keeper's music is so enthralling that it's difficult to know where to begin describing it. It gracefully courses in and out of muted acoustic pop and featherlight funk. The core elements strengthen and balance each other, coalescing in a euphoric non-zero-sum game of stylistic influences.

Real name Will Lynch, the Burlington artist just released his second EP, Nosebleeds, a fleeting daydream. The seven tracks brush past the listener's ear like warm breath. Lynch's vocals are powerful but not forceful, quiet but not weak.

The EP's title suggests many meanings. Does the "nosebleed" result from an emotional sucker punch? Is it a symptom of some internal deterioration? Or, in the context of the EP's shuffling midpoint, "Slide Tackle," is it perhaps a reference to peering down at things below from a great height? Maybe it's all of these, or none.

Throughout Nosebleeds, Lynch lingers on many physical pains. He sings of fevers, atrophy, contusions, paresthesia, hemorrhaging and scuffed knees. But he seems to take it all in stride, almost yawning at the mundanity of physical or emotional harm. There's a resilience to that, a wellspring of vitality.

Lynch also relishes bodily sensations, both pleasurable and uncomfortable. On the drowsy R&B confessional "Comatose," he sings of scruff "too rough to touch." Guest vocalist Aidan Ostby (of Vermont expat hip-hop collective 99 Neighbors) sings of "touching fingertips with my angels," poetically flipping the direct and indirect objects of a heavenly sentiment.

"Earthshine" is one of the most aurally pleasing songs here. Its warped synths and filtered guitar merge in a sonic osmosis. Reaching a near-Sade level of vaporousness, Lynch's sound floats in a pastel sky. He's "caught in the orbit soaring back your way," finding comfort in a longing that seems to stretch infinitely.

Lynch's music shares something in common with another recent production: Luca Guadagnino's 2020 HBO limited series "We Are Who We Are." That show and Nosebleeds (not to mention Lynch's 2020 EP, Bear) actively exude queerness and sensuality, and both works have a go-with-the-flow energy. They want nothing from their consumers except to be with them. They demand nothing but an open heart.

Nosebleeds is available to stream on all major platforms.

Speaking of Will Keeper, Nosebleeds