Will Cynthia McKinney Be the New Nader? 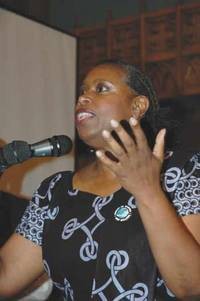 U.S. — Former Georgia Congresswoman Cynthia McKinney was widely viewed as a liberal lightning rod during her 11 years in the House of Representatives. She is the first African-American woman to represent Georgia in the House and one of a handful of politicians who opposed the Iraq war at its conception. Before exiting office in 2006, McKinney introduced articles of impeachment against President George W. Bush. But many know her best for a run-in she had with a security guard at a Washington, D.C., office building in March 2006.

That was then. Now, McKinney is being courted by the Green Party for a possible run at the White House. She is currently on a speaking tour to help pay off campaign bills from her failed congressional bid in 2006, and will appear at Burlington’s Contois Auditorium at 7 p.m. on Thursday, Aug. 23. The next day, she’ll be in Montpelier at the State House Cafeteria from 9 to 10:30 a.m. In advance of her Vermont visit, McKinney responded to Seven Days’ questions with responses emailed from the road.

SEVEN DAYS: Your name has been floated in many circles as the Green Party’s top choice for a presidential candidate in 2008. How do you respond to those rumors?

CYNTHIA MCKINNEY: I’m glad people are looking for an alternative that will provide true leadership on the issues that matter the most to average, ordinary Americans and common sense solutions to the problems they face, unencumbered by the dictates of high-priced, fancy-clothed corporate lobbyists whose positions are oftentimes at odds with the national interests of the United States.

SD: Considering your growing association with the Green Party, what has attracted you to it?

CM: I have always had a relationship with Greens: from my very first campaign for the Georgia Legislature, to the campaign anticipated by many people in 2008. After I spoke out against George Herbert Walker Bush’s decision to bomb Baghdad in 1991, I spoke on the floor of the Georgia House against that decision. My colleagues got up and walked out on me and I was vilified all over the state. My patriotism was questioned and I was compared to Julian Bond. Honestly, that was the beginning of real outreach to me by peace groups all over the country, and women’s groups who felt my position was right.

SD: How would you describe the state of the Democratic Party today?

CM: The Democratic Party has left many of its voters behind.

CM: The Republican Party has left many of its voters behind.

SD: What is your view on the role of third-party politics?

CM: I’m given the example of the Abolitionist Party that didn’t win a single election but was right on the issue of slavery and affected the course of American politics for the better. Not many people at the time would have associated themselves with such a movement; of course that doesn’t mean that the abolitionist movement wasn’t necessary, and it certainly was right.

SD: Many Americans were angered when Ralph Nader ran for president on the Green Party ticket in 2000, and blame him for President Bush’s being elected. What would you say to those voters?

CM: The assertion is made only by those who don’t know what happened in the 2000 election, or by those who want to dissuade people from looking for alternatives to the lack of representation they have now. First of all, nearly 100 percent of blacks who were registered to vote in Florida actually showed up and voted on Election Day to send a message to Jeb Bush. The mobilization was massive. Thousands of their votes were not counted. Democrats had only to defend their right to vote and demand that their votes be counted. That did not happen.

But Florida was not the only place where there were voting anomalies by race. Even in Georgia we had problems. It would have helped, too, if Gore had won Tennessee. Also, Gore asked Barbara Boxer not to object to the Florida electors even while the Congressional Black Caucus members individually objected to them. He could have refrained from silencing debate on the issue, too. But by silencing debate, disinformation can easily become information to those who are searching for answers.

SD: Speaking of Bush, is there one word you would use to describe him?

SD: How do you feel he has handled the Iraq war?

CM: His first mistake was starting it.

SD: What would you have done differently?

CM: I would have changed the name and mission of the Department of State to the Department of Peace and eliminated war as any viable option for U.S. planners. The role and the mission of the Pentagon would change, too, for the promotion of our country as a responsible global partner and the peaceful protection of U.S. interests around the world. I would stop arms transfers and I would respect democratic elections. It is not just the Iraq war that Bush has mishandled. It is the American people and the legacy of our great country that has been mishandled by this presidency.

SD: Last year you were defeated in Georgia’s fourth Congressional District. How has that impacted you as a person, and a politician?

CM: Open primaries exist in the South for the very reason they were used against me twice, specifically to deny black voters an opportunity to elect their candidates of choice.

SD: Just before leaving office in 2006, you introduced articles of impeachment against the president. Do you think he noticed?

CM: Hundreds of thousands of Americans who now support impeachment certainly noticed it.

SD: After holding office for a decade, you were defeated in 2003, but returned to Congress two years later after winning Georgia’s fourth Congressional District. In a break from tradition, your congressional seniority was not restored. Who do you think made that decision, and why do you think it was made?

CM: Nancy Pelosi made that decision, and she would have to be asked why that was the case.

SD: Who would you like to see in the Oval Office? Why?