Will Burlington Ever Say No to Its Burgeoning School Budget? | Education | Seven Days | Vermont's Independent Voice

Will Burlington Ever Say No to Its Burgeoning School Budget? 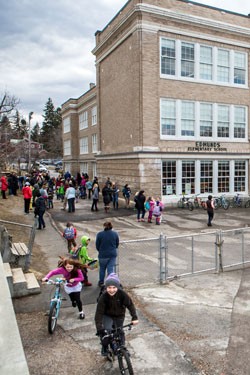 On Town Meeting Day, Williston voters rejected a school budget that would have raised property taxes by 7 percent, with the “no” vote reportedly in response to a district plan to provide every fifth and sixth grader with an iPad. Voters in Milton and Colchester also defeated school budgets, sending school leaders back to the drawing board.

In all, 16 Vermont communities voted “no” on school spending increases on March 5 — a tiny percentage of the state’s 270 districts but four times as many as turned down school budgets last year.

Burlington voters, meanwhile, approved a fiscal 2014 school budget that hikes spending by 5.3 percent and local education property taxes by an estimated 6.2 percent. That’s slightly higher than statewide averages, but in recent years Burlington’s school tax increases have outpaced rates for Vermont as a whole, as well as vastly exceeding the overall U.S. inflation rate. Local education taxes in the Queen City have soared by 40 percent since 2009, while the consumer price index nudged upward by 9 percent during the same period.

Year after year, Queen City voters approve increases to the portion of the local property tax that funds the schools. Usually, the margin isn’t even close. This year’s school budget ballot item was approved by 57 percent of voters, while last year’s drew a “yes” vote of nearly 55 percent.

“It’s remarkable that we continue to approve school budgets, especially without adequate communication from the district about what we’re getting for our money,” observes Kyle Dodson, a write-in candidate who fell three votes short of unseating school board chairman Keith Pillsbury on March 5. A former school principal in Boston who now works as director of the Champlain College Center for Service and Civic Engagement, Dodson warns that the current spending trajectory is “not sustainable.”

“In 2013,” he says, “everything involving public finances has to be looked at more prudently, more thoughtfully.”

The Burlington school district’s budget for the coming fiscal year is close to $63 million — $6 million less than the combined total expenditures of all the other city departments. The biggest chunk of school spending — 75 percent — goes to teacher salaries and benefits; health care premiums for school district employees have been rising by about 10 percent a year. Special education is also a big budget item, costing about $13 million — although special-ed spending accounts for a smaller percentage of Burlington’s school budget than it does in most other districts in Vermont.

Burlington has the highest rate of per-pupil spending in Chittenden County according to the simplest calculation: total expenditures divided by the number of full-time students being educated in the district. But Superintendent Jeanne Collins notes that after factoring in the relative costs of educating disadvantaged students and English language learners, the city’s per-pupil investment is average compared to those of seven other Chittenden County school systems. This comparison, which also shows Burlington’s spending to be slightly below the statewide average, is the measurement included in the district’s annual report.

Burlington voters have supported the city’s investment in its pupils, says Alan Matson, the school board’s leading finance expert, noting the district has “maintained a solid base of political capital” in consistently winning budget approvals. “But it could erode quickly,” he adds, noting the heavy tax burden is borne by a small minority of Burlington residents.

More than half of Burlington households are renters, and tenants generally don’t connect school-tax increases to rising rents. In addition, almost a quarter of Burlington’s 9371 leased residential units qualified for rent rebates last year under a state program for households with annual incomes below $47,000 — further insulating some renters from the effects of property-tax hikes.

Among Burlington’s 6980 owner-occupied homes, more than half are eligible for reductions in their school property taxes based on income qualifications. That leaves about 3000 of the city’s 16,350 households absorbing the full and direct impact of school-tax increases. Owners of a home valued at $308,500 will pay $396 more school-taxes this year than last — for a grand total of $4412.

“It’s inevitably going to get to the point where homeowners start leaving Burlington because they can’t afford the taxes,” predicts City Councilor Paul Decelles, a Republican from Ward 7, which largely encompasses the New North End. Town Meeting Day results might be different, he suggests, if landlords educated tenants about the connection between rent hikes and school tax increases.

Decelles, whose daughter is a fourth-grader at C.P. Smith Elementary School, voted against the school budget last month, partly because “it isn’t fair to a lot of homeowners.” He adds that his daughter is getting “a good education” from teachers whose pay rates he does not view as excessive. Starting salaries for Burlington teachers — $38,740 for the current school year — are the third lowest in Chittenden County, after Milton and Winooski.

Decelles and other critics suggest savings could be found outside the classroom — for example, from the district’s plan to provide laptops or tablet computers to middle and high school students and their teachers at a projected annual cost of $1.1 million. Starting in sixth grade, every Burlington pupil is scheduled to get a computer over the next three or four years, regardless of his or her ability to pay.

Could Burlington ever see a school-tax revolt?

It would not be unprecedented. In 2002, Queen City voters spurned school spending plans on three separate occasions, with the budget finally prevailing on a fourth vote. The main cause for resistance was disgruntlement over state school-funding formulas that were subsequently adjusted to ensure more equity for Burlington, Pillsbury notes. The unpopularity of then-superintendent Donna Jemilo also played a part in the repeated budget defeats, Pillsbury adds.

Today, there is no organized opposition to Burlington school tax increases, regardless of their size. That’s mystifying to Ben Truman, a school board member for Ward 4 and longtime Democrat. “I can’t explain it,” Truman says, noting the city’s penchant for activism and civic engagement. “Burlingtonians aren’t generally shy about sharing their political opinions.”

Truman himself says he has “no stomach for another large tax increase next year.” The father of two Burlington-educated children says, “We’ve got to hold the line.”

“They make opponents appear anti-child,” he adds. “And there’s also a feeling that the school district will always get what it wants eventually. They’ll just wear you down.”

Reluctance to speak out against school budgets may also stem from fears related to recent controversies involving race relations among students and teachers. Potential critics may worry that they will be accused of racism if they oppose school spending in a district with minority enrollment of 30 percent.

The wording of the annual referenda on school budgets also does not inform Burlington voters how much their taxes will increase if of “yes” side prevails. The ballot item simply asks whether a listed dollar amount of spending should be approved.

School officials say the budget increases are not profligate and are caused in part by the need to compensate for drops in federal, state and city funds. The district is facing another $265,000 reduction from the federal cuts known as sequestration, Pillsbury notes. Even Burlington Telecom is driving up school costs. The district will pay $723,065 in interest in the coming fiscal year on $2.3 million in debt service for bonds for capital improvements. That’s $120,156 more in interest payments than a year ago, due in part to the downgrade in the city’s credit rating caused by the BT bust-up.

But school officials say some of the biggest drivers of spending increases are costs associated with Burlington’s high number of low-income students and non-native English speakers, along with an overall increase in the number of students.

Unlike almost every other school district in Vermont, Burlington has been experiencing an upsurge in student enrollment. It’s risen 9.3 percent in the past decade, while statewide enrollment has fallen 11.3 percent. That’s partially attributable to an influx of immigrants; about 14 percent of the city’s 3632 pupils take part in English language learning programs, compared to fewer than 2 percent in the state as a whole. Moreover, half of Burlington students qualify for free or reduced-price school meals, compared to 40 percent of students statewide.

The challenges presented by a high poverty rate and a sizable number of non-English speakers help explain the Burlington district’s lagging performance in school test scores. Last year, 31 percent of students in grades three through eight were rated less than proficient as readers, while 40 percent were given the same rating for math. The respective numbers for the state as a whole were 27 percent and 34 percent.

Superintendent Collins defends the schools’ record on educating disadvantaged students and those from non-English speaking countries. “The results for students who have been in our schools for two or three years — as opposed to having just enrolled — have been excellent,” Collins says. She argues the computer giveaway is essential to prepare Burlington’s diverse student population for the 21st century workplace.

But Collins agrees with Matson that school-tax increases are not shared equally in Burlington. She blames the state for failing to fund education at levels promised several years ago when tax formulas were changed in order to ensure that students in poorer communities would have the same educational opportunities as those in wealthy “gold towns.”

“I don’t think the burden should be on local taxpayers because Burlington opens its doors to embrace those in need,” Collins says.

Pillsbury says the district is lobbying for increased funding from the state to help Burlington pay the additional costs of educating English language learners, the annual cost of which schools budget specialist David Larcombe puts at $2.4 million for the coming fiscal year — $200,000 more than for the current year. Pillsbury says the city’s school board can also save by consolidating services.

The school board itself has failed to act as an effective watchdog in recent years, admits Pillsbury, a 66-year-old retired teacher who was first elected to the board in 1987. He says the district’s previous finance chief “didn’t have the skills to do the job, or he didn’t provide us with what we needed to know about how the money was being spent.” The situation has improved with the hiring of Larcombe as the district’s budget specialist last October. The new number cruncher is getting updated finance software, too, Pillsbury adds.

Inadequate oversight on the part of the all-volunteer school board may reflect a general lack of interest in the schools on the part of Burlington residents. Elections for school board seats are seldom contested, and participation is often below 20 percent of eligible voters.

“The number of people paying attention to the schools is small,” Dodson says. “There’s no sense of this being an urgent issue — as urgent as health care. It’s also the case that the district doesn’t tell a very compelling story about what it’s doing for our kids.”