Will a High Schooler's Tragic Death Become a Turning Point for Rutland? 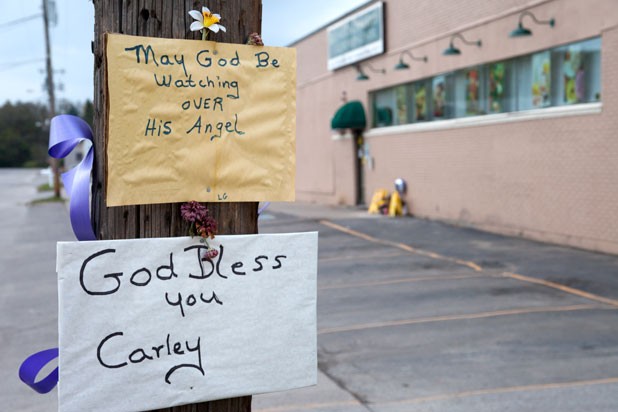 It’s been two weeks since a driver who police say was huffing aerosol inhalants plowed into a row of parked cars in Rutland, killing 17-year-old high school senior Carly Ferro. But the city is still reeling from the accident.

Specifically, Ferro’s death seems to be fueling doubts about the future of a burg already hard-hit by the recession. A few residents lashed out on Facebook, calling for tough justice for the driver and passengers of the car that struck Ferro, and lamenting Rutland’s transformation in recent years into a “drug town.”

“Clean this place up!” one person wrote on the Rutland City Police Department’s Facebook page. “Drugs are taking over!”

In good times, Rutlanders are the first to dismiss the bad rap their city has earned in the rest of the state. Rutland’s boosters say the “RutVegas” nickname is not deserved, pointing to crime statistics that show the city is no less safe than other urban areas of the state.

But when tragedy strikes, Rutland’s troubled image may prompt its residents to push the panic button sooner than they would have. Rutland City Police Chief Jim Baker says the cheerful, hardworking Ferro “represented what was the best about Rutland. Losing her really hits a very tender spot,” he says. “We lost one of our bright stars.”

Ferro was walking to her father’s parked car on September 26 at about 6 p.m. at the end of her after-school job at Rutland Discount Food and Liquidation Center. That’s when 23-year-old Alex W. Spanos drove his sedan into Ron Ferro’s car at an estimated 80 miles per hour, fatally pinning Carly between the car and the food center’s brick wall.

Spanos pleaded not guilty in late September to six charges, including gross negligence and manslaughter, and is being held at the Rutland jail for lack of $200,000 bail.

Rutland residents such as Jennifer Vargas say Ferro’s death is a sober counterpoint to the grassroots efforts to revitalize the Marble City. “It’s so easy to take the wind out of our sails,” says Vargas, who purchased a home in July two blocks from the accident site.

Vargas, now 37, grew up in the neighborhood, and says it has become “downright scary.” Police recently raided a house five doors down, and Vargas and her husband have installed a motion-activated surveillance camera on their property. They also built a 6-foot fence around part of their yard so that they can feel safe when their 4-year-old plays outside.

How bad is Rutland’s crime problem? According to figures supplied by city police, the total number of crimes increased by 3 percent from fiscal year 2011 to fiscal year 2012. Burglaries and thefts were up significantly — 28 percent and 30 percent, respectively. Robberies nearly doubled in that time frame, from nine in fiscal year 2011 to 17 the following year. That’s in keeping with what Baker says are the most serious criminal threats to the city — property and “quality of life” crime likely fueled by drug addiction.

City police have scheduled a community meeting on crime for October 25, and recently received a $50,000 grant to hire a full-time drug-crime analyst.

Susan Lloyd Robertson, who recently moved back to the Rutland area after 14 years in Boston, says the numbers don’t tell the whole story. She thinks crime stands out more in Rutland than in other parts of Vermont because of the city’s depressed economy.

“I had to buy a home in Rutland Town, because Rutland doesn’t have any good neighborhoods anymore,” she says. “I wanted my son to grow up in the same environment I did, and I came back here a little delusional, thinking that still existed.”

The frustration with drugs in the community has a number of residents — Robertson and Vargas included — complaining about city officials.

“No one is publicly taking the lead here in saying, we’re cracking down on this, and this is how we’re doing it,” says Robertson. “We’re angry, and no one’s coming out to lead us.”

Mayor Chris Louras disagrees with that assessment. He says Rutland “is not one of those communities that sticks our head in the sand and pretends that there’s not a problem. Many communities in the state do that,” he says. “We’re going to hit the issue on the head.”

The board of aldermen has taken at least one stand on the issue of drugs in the community. Earlier this month, it voted unanimously to ban medical marijuana dispensaries in Rutland.

Meanwhile, a new opiate treatment center is scheduled to open in Rutland’s Howe Center, perhaps as soon as this month. Louras argues it’s part of a multi-pronged approach to fighting drug addiction that includes enforcement, prevention and treatment. “We don’t have a lot of treatment facilities in Rutland right now, and how’s that working out for us?” he asks rhetorically.

The irony is: The drug that led to Ferro’s death wasn’t illegal. Spanos was alleging huffing Dust-Off, a brand of dust cleaner commonly used to clean computers and electronic equipment. The cleaner contains difluoroethane, and the high from the gas can cause paralysis for several minutes. Chief Baker acknowledges that Rutland has “enormous challenges” in the form of poverty and addiction, but says in this case, Ferro’s death “had nothing to do with anyone supplying any drugs.”

Larry Jensen, chair of the Rutland police commission, says there’s no silver lining to Ferro’s death. But he hopes that if anything positive comes from the tragedy, it will be greater community involvement in dealing with drug use and associated crimes.

“Everybody could do more,” Jensen says. That could mean calling the police hotline, or posting signs, as some residents already have, declaring that crime won’t be tolerated in their neighborhoods. But Jensen also thinks Rutland can’t let itself wallow too much in a perception of the city as crime and drug riddled.

“I think it’s important that you speak well about your city, and be supportive of your place,” says Jensen, who formerly worked in recruitment at the Rutland Regional Medical Center.

Jamie Pemrick has been doing her part — with mixed results. She and her husband chaired a neighborhood committee that organized monthly meetings with the police to discuss resident concerns. After a good turnout out for the first meeting around a year and a half ago, attendance dwindled to just one or two people each month.

Now Pemrick is leading a new group called the Carly Ferro Purple Ribbon Project. She’s encouraging Rutland residents to put up purple ribbons around the city, a gesture that’s “simply about taking our towns back so something like this might not happen again,” she writes on Facebook.

In times like these, the community “comes together like you would never believe,” Pemrick observes, referring to Ferro’s death. “But it fades away quickly. Unfortunately, we need to keep people’s anger going to make the difference that needs to be made.”