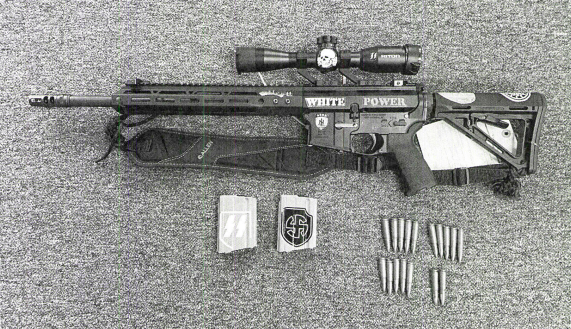 The U.S. Attorney's Office charged William Hillard, 51, on Thursday with illegally possessing an explosive device and a firearm. The federal complaint followed a raid of the house on Wednesday by local, state and federal authorities, during which they found a semiautomatic rifle adorned with "WHITE POWER" and skull stickers.

Hillard cannot legally possess firearms due to a 1997 felony conviction in New Hampshire for possessing an explosive device. Hillard told police that he amassed the weaponry to protect himself from "Antifa" or "other Democrat-affiliated extremist groups," in anticipation of "societal unrest," court papers state.

At a detention hearing on Friday, Magistrate Judge Kevin J. Doyle ordered Hillard held in prison pending trial. Hillard, through assistant federal defender Sara Puls, asked to remain at home with his mother. Puls said Hillard disputed allegations that he had made threats to anyone but was willing to undergo a mental health assessment.

Doyle urged him to do so. "I think at this point, there is a need for you to receive some type of mental health counseling," the judge said.

Earlier this month, according to an affidavit of federal Bureau of Alcohol, Tobacco, Firearms and Explosives special agent Scott Murray, an informant provided Hartford police with a homemade explosive device he said he'd received from Hillard. The informant also reported seeing Hillard make larger bombs using explosive powders and shrapnel such as ball bearings and screws.

The informant further told authorities that Hillard was racist and had discussed overthrowing the government and killing his neighbors. The threats were becoming more frequent, the person reportedly said.

Members of the Vermont State Police Bomb Squad and the ATF agent disassembled the two-inch long bomb provided by the informant and identified explosive powder inside.

Police then obtained a search warrant for the house along a suburban cul-de-sac where Hillard lives with his elderly mother.

There, Hillard's mother explained to authorities that Hillard had been previously arrested for making bombs and had lost several fingers when one of them exploded. The woman said she didn't know he was still making bombs but that he had an interest in Nazi history. Her son had also confronted neighbors who he thought were Democrats, the mother said, which upset her.

Hillard told investigators that he'd set off 50 or so explosive devices in recent years using materials he purchased online, the affidavit alleges.

Along with the rifle, police also found ammunition, a bulletproof vest, and pipe bombs measuring as long as six inches.