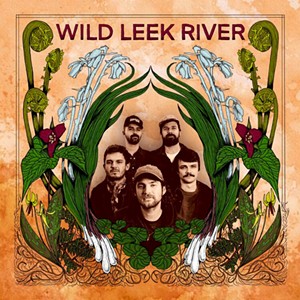 Country music is often associated with the South, but the genre's universal themes and rural imagery transcend geography. The Green Mountains have long been a bastion of twang. And Vermont-based Wild Leek River's debut self-titled album is testament to the fact that country music doesn't just live below the Mason-Dixon Line.

Lead vocalist and acoustic guitarist Ian Burton fronts the quintet with a silky baritone that carries hints of Darius Rucker and Zac Brown. Despite those modern comps, from the opening track, "One Big Third World," it's clear that the band is more rooted in old-school country than the newer, pop-inclined sound that artists such as Taylor Swift have adopted. Ben Rodger's pedal steel guitar lines recall Loretta Lynn, not Lady A.

"It's Too Broke" is a classic honky-tonk number that would be at home in a dive bar anywhere. Burton leans into the twang for his verses before letting bass guitarist and second vocalist Andrew Stearns take over. Fun and bouncy, the song makes you want to hop out of your chair and dance the Texas two-step.

"Sittin' in That Rocking Chair" boasts some impressive guitar picking by Ian Mack but comes off a little bit frantic and rushed. "One Step Forward, Two Steps Back" is another throwback, à la Patsy Cline, providing a nice respite from the raucous track before it.

In a slight departure from the rest of the album, "Troutlaw" tends toward outlaw country. Burton's vocals take on a darker tone as he channels Folsom Prison-era Johnny Cash singing to a cafeteria full of convicts. The bonus track, "Molley Bootlegger," could be an unreleased song from the O Brother, Where Art Thou? soundtrack. Its sound is similar to trad tune "I Am a Man of Constant Sorrow," showcased in that film.

Before the release of Wild Leek River, the band learned that the engineer on the record had attended Donald Trump's January 6 rally in Washington, D.C. Consequently, Wild Leek River put out a statement pledging to donate a portion of the album's proceeds to the Southern Poverty Law Center.

In posts on Facebook and Instagram, they wrote: "As both a band and as individuals, we feel we have a duty to state clearly and unequivocally that we strongly oppose white supremacist ideologies and those adjacent to them."

Wild Leek River perform on Friday, August 20, at Zenbarn in Waterbury, and Saturday, August 21, at Foam Brewers in Burlington.

Wild Leek River is available for streaming on Spotify.