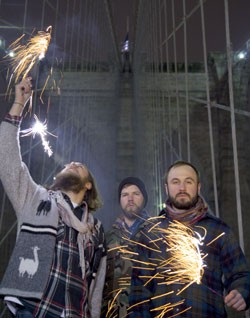 If nothing else, it has been an eventful year and a half for avant-garde rock outfit Akron/Family. The cultish Brooklyn-based indie heroes bade farewell to founding member Ryan Vanderhoof, left longtime label Young Gods Records, and toured relentlessly — including a run last year with noted Burlington experimental music guru Greg Davis. This week, they released what might be their finest and most finely honed record to date, Set ’Em Wild, Set ’Em Free.

Seven Days recently caught up with Akron/Family’s Dana Janssen by phone from Coney Island, in advance of their show this Friday at Club Metronome.

Seven Days: The new album feels far more accessible than your previous work. Was that a conscious decision, or perhaps a natural extension of the changes the band has been going through?

Dana Janssen: I would agree. I mean, we have that in us. I don’t know if it was because we had the time to explore ideas, to craft our tunes into something that was dense, yet everything had space to breathe. Like, ideas that we had on a song had space to breathe and came across as more accessible in that manner. Whereas in the past we haven’t had as much time in the studio and had to just throw as many ideas out there as possible. Like, we’re trying to create a thing, but didn’t have enough time to find the one thing to play. So it ends up being a collection of tracks that created that one thing.

It’s interesting to think about the songwriting [in those terms], because oftentimes you can say a lot more by just playing the right part than you can by adding instruments. So I feel that on this album, we’ve given ourselves enough time to really explore the songs that we had written and assure ourselves that they are really good songs, as opposed to just good sounds. So I think that may be the reason it translates into more accessibility. It was also the first time we had been able to self-produce. And having lost one of the members of the band and having to kind of re-evaluate what we were doing … this sort of unity, or brotherhood, came out. And that helps to translate into more accessibility as well, because everybody wants that, whether they know it or not. Everybody wants to be accepted. That’s an idea and emotion that comes through in a lot of the songs that we put on this record.

SD: How did losing Ryan Vanderhoof affect the album?

DJ: It’s very interesting. It was definitely noticeable that there were less cooks in the kitchen. So it’s a lot easier for everyone to not only say what they want to say, but to have the space in the room to really make things clear. Also there aren’t as much … I don’t want to say “battles,” because that implies that it was difficult with the four of us. I think “contention” is a good word. There’s not as much contention. And that’s inevitable when you have a large group of people. There are going to be more ideas. There is more ease of passage.

SD: How does your approach to the studio differ from live performance?

DJ: Obviously, in a live situation you only get one chance to say it, right? So at our shows, specifically, the energy of the crowd plays a huge part in what we give to them. It’s like we feed off of it, in a lot of ways. We’re getting better at generating that energy ourselves and not having to rely so heavily on that. We got into a pattern of depending on other people, the crowd, to sort of give us the juice to give it back. Especially when you’re, like, three weeks deep into a tour, you’re so tired and kind of annoyed with everyone, you need that fuse to keep going. So a live situation is much more dependent on the vibe of the room, the vibe of the people… Very present tense. We like to stretch our wings and improv and jam a little bit on the songs.

Our approach to the studio is more about finding the right sounds, the right way to say it. Because once you etch that vinyl, it lives out there on its own and there’s no going back. Which is great, in a lot of ways. Actually, it’s perfect for me. I was watching something the other day about the paradox of choice, and how because we have so many choices these days, things become less satisfying.

It’s difficult when working with music, because you have every option available to you. If you look back and think, Oh, I could have done this differently, or I could have done that differently, you’re going to see yourself in a hunk of regrets. For me, it’s beneficial to focus on what happens in the moment in the studio. Sort of like a live situation … We want to capture the energy that goes on in a live show. We definitely try to achieve that, but at a much more relaxed pace.

SD: Tell me about working with Greg Davis.

DJ: Davis is great. I’ve never really met anyone quite like [him]. He’s never had a drop of alcohol, or cigarettes, or done any drugs. So his brain is unique in a way that it’s just completely as natural as it can be. It’s pretty awesome. Pretty incredible … He’s super sweet. He’s, like, a total hippie.

Another amazing thing about him is that we were the first rock band he ever actually played in. He had done like, hip-hop groups when he was in Chicago and then went into the art scene with the drone music and everything. But we were the first rock band he played in. And it was awesome to have a player with no stock responses, no licks that he loves doing in a rock song … Because, when it comes down to it, we’re just a rock band. He really dedicates an honest stride to everything he does.