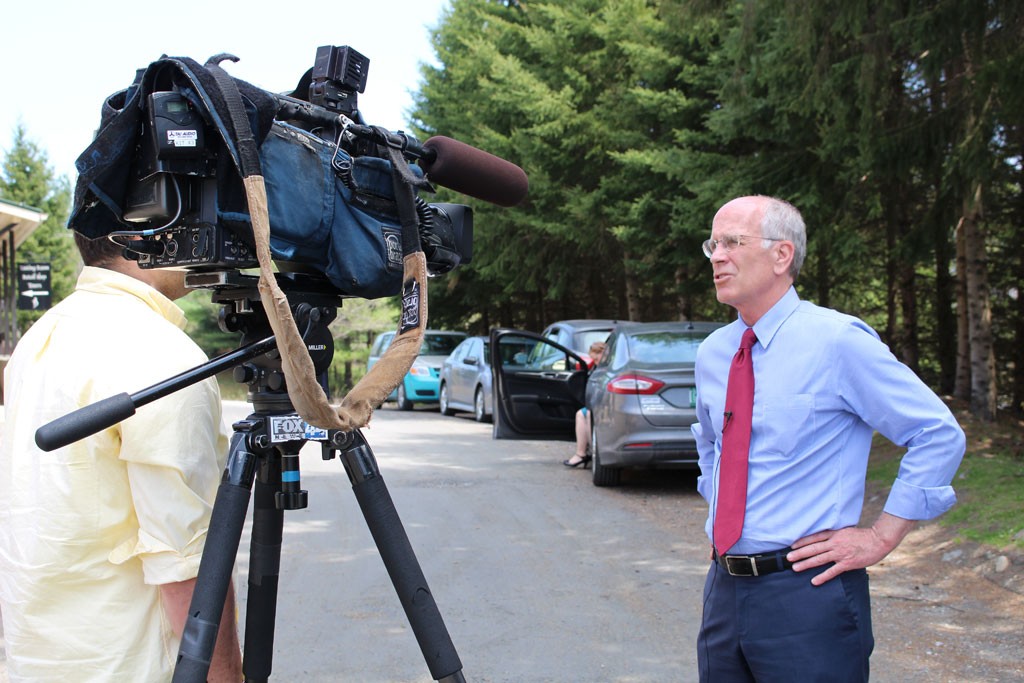 The last time Vermont's top political job opened up, with the retirement of Republican governor Jim Douglas, then-Seven Days columnist Shay Totten emailed me to check out a lead.

"Rumor is PW is interested..." Totten wrote, referring to my boss at the time, Congressman Peter Welch (D-Vt.).

It was August 2009 — nearly three years after Welch rode an anti-Iraq War wave to the U.S. House. That summer, seven months into Barack Obama's presidency, sizable Democratic majorities in the House and Senate were plowing through an aggressive agenda. They'd passed the Recovery Act and were knee-deep in what would become the Affordable Care Act, the Dodd-Frank Act and the ill-fated Waxman-Markey climate change bill.

Welch had little interest in returning to Montpelier, and as his spokesman, I was under strict orders from chief of staff Bob Rogan to squelch any such rumors.

"Off the record: no chance," I responded to Totten.

Fast-forward to two weeks ago, when Douglas' successor, Democratic Gov. Peter Shumlin, announced he'd step down in January 2017 after a turbulent three terms in office.

This time, something was different. After Shumlin consigliere Bill Lofy floated Welch's name as a potential gubernatorial candidate, Rogan declined to squelch the rumor.

"It's likely Congressman Welch will seek reelection to Congress, but this news comes as a surprise, so he will be taking the time he needs to thoughtfully consider how he can best serve Vermonters," Rogan said in a statement shortly after Shumlin's announcement.

As word spread that Welch was taking the prospect seriously, a rapidly growing field of potential gubernatorial candidates froze in place. Top-tier Democrats said they'd defer to the congressman. And while Lt. Gov. Phil Scott, the GOP's top prospect, claimed a Welch run wouldn't influence his decision, few believe he would oppose a popular, well-known, well-financed Democrat in a high-turnout presidential election year.

So why on Earth wouldn't Welch run? It ain't every day you're offered the governorship on a silver platter.

Here's one reason: Politically speaking, the 68-year-old congressman has it made in the shade. Welch hasn't faced a real race since he defeated former Vermont National Guard adjutant general Martha Rainville for an open seat in 2006. As a Democrat representing liberal Vermont, he rarely has to make a tough decision on the House floor. And given the depressingly depleted state of the Vermont press corps, he is subject to little scrutiny.

If the dude wants to ride out the remainder of his political career with sky-high approval ratings, trips to Cuba and appearances on MSNBC, he should stay put.

But if Welch really wants to make a difference in Vermonters' lives, he'll give up his position in the permanent minority of Speaker John Boehner's (R-Ohio) House — and the sliver of a chance at becoming a U.S. senator — and take the reins as Vermont's chief executive.

Not that it's easy, as Shumlin himself pointed out in his retirement announcement.

"Governors actually have to do things. We're not like some other politicians in America," Shumlin said, surely alluding to the legislators of the world who simply vote 'yay' and 'nay.' "We've got to deliver. And it's a tough job."

Welch may have voted for the Affordable Care Act, but it was Shumlin who actually had to implement the thing in Vermont. The governor's difficulties in meeting its unrealistic deadlines essentially ended his political career.

So why on Earth would Welch run?

As a senior statesman with decades of experience and bipartisan bona fides, he could come back to Montpelier and be the grown-up in the room. Like California Gov. Jerry Brown, who returned to the office after a 28-year hiatus, Welch could make the difficult decisions necessary to tackle the state's toughest challenges: its perennial budget gap, rising property taxes, costly health insurance and endemic poverty.

If Welch considered this his last political act, he could ignore the special interests that so often get in the way of change: the Chittenden County business elite who whisper "no new taxes" in every governor's ear; the union bosses who bristle at any change that could affect their membership; the contract lobbyists who prowl the Statehouse on behalf of corporate clients.

Of course, Welch would have to make his own declaration of independence, or we'll end up with yet another governor who puts the transactional above the transformational. A quick glance at his Federal Election Commission filings shows that Vermonters aren't the only ones Welch is working for in D.C. Among those who have contributed to his $1.7 million campaign war chest are the likes of Comcast, Verizon, General Dynamics, Duke Energy, Aetna and the National Chicken Council.

By all accounts, Welch is truly struggling with the unexpected decision he now faces. It wasn't in the game plan.

But Welch has always aspired to be a great leader — the kind of man remembered long after he's gone. This is his opportunity to show whether he is one.

Perhaps the only pol who isn't waiting on Welch is Chittenden County State's Attorney T.J. Donovan. He isn't even waiting on Attorney General Bill Sorrell.

"There's no reason to be coy about this," Donovan says. "I'll have a more formal announcement after Labor Day, but why continue to play the game? Let's be honest and transparent about it: I'm running — and I'm running to win."

It's early yet, but the third-term county prosecutor's timing is smart.

As every other politico weighs a run for governor, lieutenant governor or the U.S. House, Donovan has staked a claim on perhaps the easiest office to win. And it's the one that makes the most sense for an up-and-coming 41-year-old with a long legal résumé and clear ambition for even higher office.

It's easiest to win because, even as a first-time statewide candidate who jumped into the race five months before the August 2012 primary, Donovan lost to Sorrell by just 714 votes. And that was before the incumbent became ensnared in an ethics scandal related to his campaign finance practices.

Sorrell clearly isn't getting great political advice about how to handle the challenge. In his responses to seemingly every reporter who's asked, he's gone out of his way to raise the issue of those ethics allegations, saying he'll "begin to seriously think about" the race once an independent investigator finishes a review of the charges.

"I look forward to the truth coming out," he said.

Wow. Way to keep the focus on your own alleged improprieties.

Donovan says he won't bring up the charges or "say anything negative about Attorney General Sorrell." But you can't oppose an incumbent from your own party without drawing distinctions — and Donovan appears prepared to do just that.

"I think I can do a better job than what's currently being done at that office," he says. "At the end of the day, the power of the attorney general's office — whether it's economic justice, criminal justice, environmental protection, utility regulation, campaign finance — it really is about being engaged."

Nearly 20 years after he was appointed to the post by governor Howard Dean, will Sorrell wage one last fight to clear his name? Or will he finally call it quits?

Only Sorrell knows for sure.

What Happened in Vegas

Support for Sen. Bernie Sanders' (I-Vt.) economic populism has fueled his recent surge in New Hampshire and Iowa presidential polls. But now that the national pundits are starting to take him seriously, the Vermont independent has been forced to address issues outside his wheelhouse.

In recent weeks, Sanders skeptics have questioned his commitment to immigration reform, noting that he failed to raise the subject during his 35-minute campaign kickoff.

"I don't know if he likes immigrants, because he doesn't seem to talk about immigrants," Congressman Luis Gutiérrez (D-Ill.), a Hillary Clinton supporter, told talk show host Larry King. "He's been kind of quiet and silent."

Sanders reacted quickly, adding new lines to his stump speech and speaking last Friday at a Las Vegas conference of the National Association of Latino Elected and Appointed Officials.

"I myself am the son of an immigrant," he told the crowd, recalling his father's journey from Poland to Brooklyn and his mother's unrealized dream of buying her own home. "Their story, my story, our story is a story of America."

Sanders pointed to his legislative record supporting liberal reforms and even tried to one-up Clinton by obliquely criticizing her suggestion last year that undocumented, unaccompanied children should be turned back at the border.

"America has always been a haven for the oppressed," he said. "Is there any group more vulnerable than children? We cannot and must not shirk the historic role of the United States as a protector of vulnerable people fleeing persecution."

While in Vegas, Sanders found himself responding to yet more issues outside his comfort zone: race and guns. Three days earlier, a young white man with a history of racist musings killed eight parishioners and a pastor at a historically black church in Charleston, S.C.

Sanders was quick to condemn the killings and to cancel a planned trip to Charleston, but he was cautious in calling for South Carolina to remove the Confederate battle flag from its capitol grounds. He waited until late Monday, when state Republicans pledged to remove the flag, before saying he supported such a move — three days after Seven Days inquired about his position.

Odder still, Sanders appeared unprepared to answer predictable questions about his evolving position on gun rights (see blog excerpts, page 22). Though he was first elected with the support of the National Rifle Association and voted against the Brady Bill in 1993, he has since awkwardly embraced gun control, voting for universal background checks and an assault weapons ban in 2013.

"I think the people of Vermont understand that guns in Vermont are different than guns in Chicago or guns in Los Angeles," he told reporters in Las Vegas, according to CNN, adding that the country needs "to have a serious conversation" about its gun laws.

Asked what, precisely, that conversation might entail, Sanders dodged.

"I will talk about guns at some length, but not right now," he said.

Not exactly the kind of truth-talking response for which Sanders has become famous.

Perhaps he realizes that when it comes to immigration, race and guns, he's no longer talking to an audience of old, white, gun-lovin' Vermonters — and he's in search of better answers.