'Why Wouldn't I Try to Help Them?' A COVID-19 Survivor Donates Her Plasma | True 802 | Seven Days | Vermont's Independent Voice

'Why Wouldn't I Try to Help Them?' A COVID-19 Survivor Donates Her Plasma 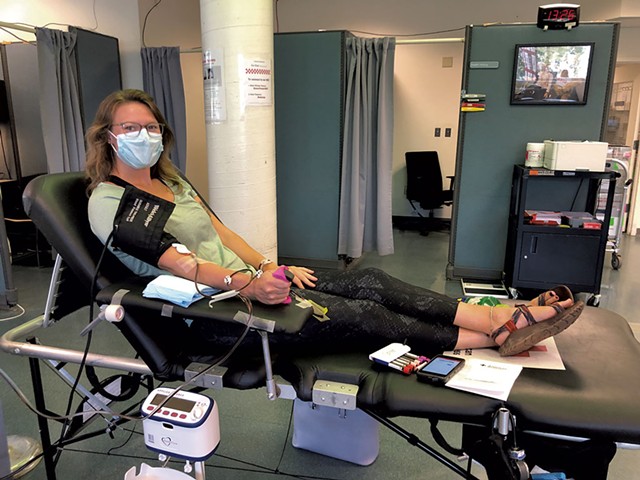 Kailey Stevens was living in a small mountain town in Morocco when she came down with what felt like a nasty bug in early March. The 24-year-old Barre native was just a few months into a 27-month Peace Corps placement in the North African country. But the global COVID-19 pandemic cut short her overseas adventure, and she returned to Vermont on March 18.

Her symptoms — including headache, nausea, cough, shortness of breath, and loss of taste and smell — only worsened, so her doctor ordered a coronavirus test on March 20. She found out she was positive the next day, and then spent three weeks isolated in a Williamstown cabin until she recovered.

All told, Stevens was sick for 34 days. She has no idea how she contracted the virus.

"The only thing I didn't have the entire time was a fever," she said. "Which is just crazy, because that seems to be the screening method."

Stevens learned that the American Red Cross was collecting plasma from people who have survived COVID-19; health officials think the antibodies in their blood could help others combat the infection. Donating plasma involves a 90-minute session.

So, hoping to contribute, Stevens got in touch with her local Red Cross and donated plasma at the Burlington office in late April. It's an easy process, she said, that she's repeated twice more.

The Red Cross told Stevens her last batch of plasma went to a patient hospitalized in Georgia.

Stevens, who works as a nurse at the Central Vermont Medical Center, says donating was a no-brainer.

"I don't even remember having a debate about it," she said. "I'm better; someone else is still suffering. Why wouldn't I try to help them?"