Why Wine Mavens Love Vermont, the Small State With the Sophisticated Palate 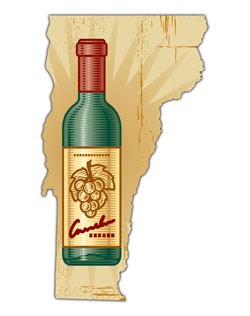 Over the past few weeks, all of this happened: A trio of quasi-famous French winemakers trekked to Burlington to pour their wines during a private meal. The head of the Austrian wine marketing board came to Quechee to lead a seven-course dinner with pairings. And a celebrated wine writer drove six hours from New York City to Burlington to swill natural wines alongside a few dozen wine geeks. At each of these meals, guests drank distinctive, sometimes hard-to-find wines.

Vermont’s entire population is just 626,000, and the state is better known for maple syrup and beer than wine. So why are more and more wine-world luminaries heading here for dinners and meet and greets? And how do their sometimes-obscure wines make it to the North Country, far from the urban markets where they’re more familiar?

“We’re always in the top 10 percent for per capita wine consumption,” says Rafael Flores, owner of the Upper Valley’s Artisanal Cellars, one of the state’s six wine distributors and one focused almost exclusively on small-production, terroir-driven wines. “I think a lot of [winemakers] come up here and they realize that people here just care. They pay attention.”

Though he’s too humble to admit it, Flores is part of a small group of people who are gradually changing the wine Vermonters drink by steering us toward off-the-beaten-path bottles. Wines with stories. Wines with, say, unusual orange hues. Wines that stray far from the Yellow Tail and Jacob’s Creek that many Vermonters still buy in great volume from supermarkets and general stores.

“It wasn’t too long ago there weren’t that many wines to choose from in Vermont. But once natural became available, it spread like crazy,” writes wine journalist Alice Feiring in an email, referring to the unadulterated wines that are her passion. “From [Osteria] Pane e Salute in Woodstock to Hen of the Wood [at the Grist Mill], and now with the crazy, great wine lists in Burlington, this is really getting traction.”

Last month, Feiring traveled to Vermont for Vermont Natural Wine Week, an event organized by Artisanal Cellars. It celebrated low-intervention wines, those often made more in the vineyard than in the cellar, fermented with natural yeasts and bottled with no added sulfur.

After a tasting at Dedalus Wine in Burlington — and a signing of her book Naked Wine: Letting Grapes Do What Comes Naturally — Feiring and about 20 others headed to Pistou for a dinner that included salmon tartare laced with dill and pork-belly confit with celeriac purée. Guests were handed glasses of a crisp Friuli sparkling wine, Furlani Naturale Brut Nature, as chef Max MacKinnon and his staff set out platters of glistening scallop crudo with orange slices and fans of fennel. At two long tables, the wines poured with each course came from locales as diverse as Austria (Meinklang) and Barnard, Vt. (la garagista), but each shared a distinctive “taste of place” that ignited conversations late into the night.

Many of the wines came from Artisanal’s portfolio. Flores founded the distribution company six years ago to sell the small-batch Italian, French and Austrian wines he had adored since college and during his time working in the Manhattan wine industry. “I just figured that if I loved these and I’m passionate about it, I can sell them,” Flores says.

The 34 wines with which he began his business included a few food-friendly Austrian bottles — then virtually unknown within Vermont’s borders. One of the first places Flores approached was Norwich Wines and Spirits, which Peter Rutledge has owned since 1996. He became Artisanal’s first customer.

“[Flores] was offering [wines] that no one else was selling, really unusual stuff,” Rutledge recalls in a recent phone conversation.

Warren’s Pitcher Inn, Burlington’s Dedalus Wine and Woodstock’s Osteria Pane e Salute — which is co-owned by Deirdre Heekin of la garagista — also became early customers. Flores’ enthusiasm for Austrian wines such as Zweigelt and Grüner Veltliner eventually caught on, and they began appearing on wine lists and shelves across the state. “My inventory has become ridiculously biased toward Austrian wines,” Rutledge says.

Those wines were not and are not easy sells. “I’ve learned to tell people, ‘When you hear Austrian, think northern Italian,’” Rutledge advises.

Jason Zuliani, who co-owns Dedalus Wine with Tim Banks, agrees that selling wines he and his staff are passionate about — such as Beaujolais made by die-hard natural wine producers — requires constant marketing juju.

“Sometimes, people are not willing to move out of their comfort zone because they’ve been burnt,” Zuliani says, referring to buyers’ initial forays into unfamiliar wine territory. “Still, we’re always hoping we can sell something new. It’s still a hard sell, and we work at it all of the time.”

The process goes both ways. Enterprising wine-shop owners such as Zuliani and Rutledge sometimes contact their distributors — including Flores, Drew Robinson of Vermont Wine Merchants and Lisa Strausser of g.housen — to tell them about wines they’d like to see imported into the state, or that their “wine sleuth” customers are requesting. Flores calls such wines the “crazy little things” that he and other distributors try and track down. Those recently included wines from Sicilian natural wine producer Frank Cornelissen — including his flagship wine, Magma — which took Strausser two years to bring into the state.

“It can be costly, and a risk,” Zuliani says, as the wines appeal to a small group of people and are not guaranteed to sell. “These aren’t wines that are necessarily flying out by the pallet.”

For Rutledge, this back-and-forth dialogue is worth the effort. He loves guiding customers away from “generic, mass-produced wines.” Though he religiously maintains a stock of $10-and-under wines, it generally consists of bottles that are decidedly off the beaten path.

“A lot of lower-end wine is made to fit a profile,” Rutledge says. “A company might say, ‘Malbec is flying off the shelves. So what we really need is a deep, dark $8 Malbec.’ And the wine appears, and there are 5000 cases of it,” he continues. “It’s been created to fit that niche, which is really the opposite of how it should happen.

“What should happen is, a wine is made from the place, in the vineyard, rather than what gets chosen by the tasting panel of a large brand,” Rutledge asserts.

Who can afford to drink so adventurously, or to drop $30 on bottles night after night? Rutledge doesn’t think that’s necessary — but he does advocate for spending a bit more on a first foray into an unfamiliar varietal “to stick your toes in the water.” Once a drinker knows what a “fantastic” version of, say, Grüner Veltliner tastes like, he or she can seek out less expensive versions. “A lot of people form bad misconceptions of a particular kind of wine because they go out and buy a $10 bottle,” Rutledge says.

Dining out with friends is another opportunity to try new wines, suggests Zuliani, who became a partner in Pistou earlier this spring and uses the restaurant as a wine lab of sorts. “If you go out, order a few bottles [of something unfamiliar] and spread the cost of the wines over a few people, then people can enjoy different wines without killing themselves.”

Since Zuliani and his wife, Emilie Paquette, came on board, most of Pistou’s walls have been covered with chalkboard paint and an eclectic, Old World-heavy, ever-changing wine list. “Instead of having to worry about a broad retail selection, I said, ‘Hey, I can kind of obsess,’” Zuliani observes of his work at the restaurant. His obsessions have ranged from Burgundy to “artisanally produced Loire wine to weird orange wine.”

This adventurous attitude among restaurateurs and retailers has helped draw increasing numbers of Austrian, French and Italian winemakers to Vermont. But it certainly doesn’t hurt that Vermont is a pretty place with food to match.

“I think, to a person, they [the winemakers] love it here,” Flores says. He’s hosted a few winemakers who have made multiple trips to Vermont from Europe. “The first time they come here, they’re pleasantly surprised, and they discover this real kinship with Vermont — whether it’s the natural, organic, local thing or the food, which is honest and beautiful.”

Wine writer Feiring confirms the sense of discovery. “Well, it’s no hardship to visit — it’s beautiful!” she emails a few days after her trip to Vermont. “And it’s gratifying to see the wine awareness [there] explode.”