Why Were There 13 Animal Kidneys at the Intervale? | WTF | Seven Days | Vermont's Independent Voice

Why Were There 13 Animal Kidneys at the Intervale? 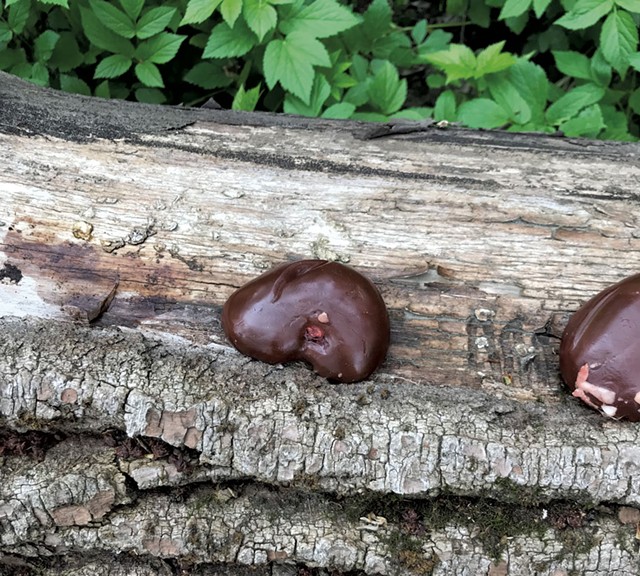 Our walk at the Intervale in Burlington was cut short one afternoon last week. It ended after our dog Johnny ate a mystery meal that was lying in wait on a log by the Winooski River just off the Rena Calkins Trail.

Johnny ran ahead of me and detoured away from the river to a downed tree, where he began eating intensely and unstoppably. He wouldn't come when I called him, so I went to him. Johnny, a 7-year-old golden retriever, was devouring brownish-purple blobs set in a row on the log. They were spaced maybe six inches apart, each about the size of a clenched fist.

I took a picture of the foraged food and called our veterinarian to report that Johnny had eaten some kind of strange-looking mushroom or fungus at the Intervale.

The vet suggested I give Johnny hydrogen peroxide to induce vomiting or bring him into the office where they could make him throw up (by a different method). I decided to let the pros handle it and drove to VCA Brown Animal Hospital in South Burlington. He arrived as an emergency patient and was taken out back for an injection to make him vomit.

"Johnny always comes when I call him," I told the vet tech, "unless he's eating a dead animal."

Little did I know.

Out of my view and in the care of a doctor, Johnny vomited 13 kidneys, identified by the veterinarian. Yes, kidneys. Not the bean. The animal organ. (Layla, our other dog, was made to vomit just in case. She threw up nothing but her breakfast.)

When the doctor informed me of her discovery, I was grossed out. Still, I was pleased that the expulsion of kidneys — eaten and expelled whole by Johnny — hadn't happened at our house. When I came to my senses, I was also dumbfounded.

WTF? How did a bunch of kidneys wind up side-by-side on a log near the Winooski River not far from the Intervale Center? What animal species did they belong to?

The vets at Brown ruled out a few: human, cow, cat and chicken; dog was unlikely. I googled goat kidney at the clinic, and it looked like a possible match. That would be six and a half goats at two kidneys apiece.

The Burlington police, whom I called to report the incident, had little interest in the event once it was established that Johnny had eaten nonhuman kidneys. (It took great restraint, I would imagine, for the cop on duty not to hang up the telephone or laugh out loud.)

Back home from the veterinary emergency, I turned to social media to try to solve the mystery. I posted pictures of the kidneys on Facebook, told the tale briefly and warned dog walkers that perhaps there were more kidneys by the Calkins trail.

"Call Netflix," wrote a Montpelier man, an arts type. "I've heard of 'Guns Along the Mohawk' [sic] but 'Kidneys Along the Winooski' is a far more intriguing title." 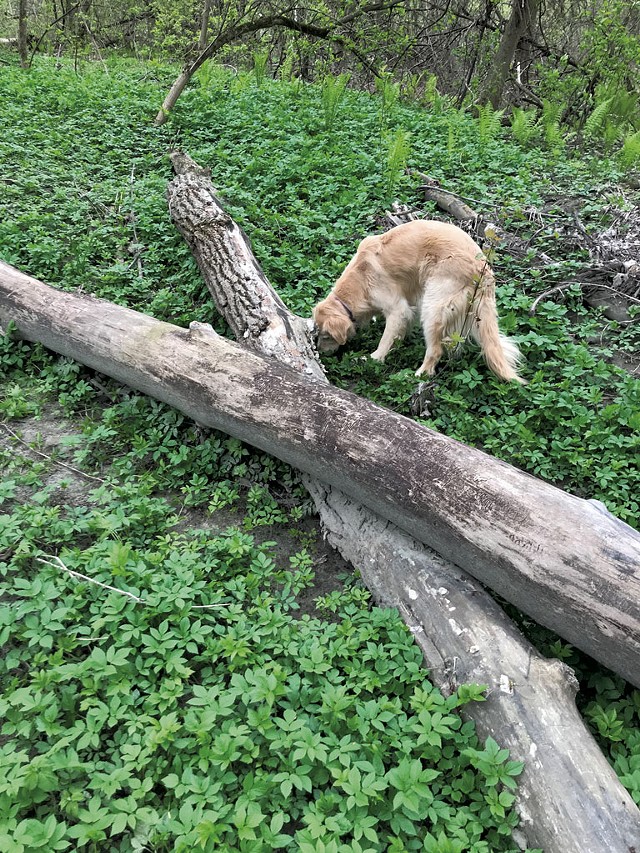 A former coworker suggested that some kind of ritual might explain it: "Could be a ritual sacrifice," she wrote. "Organs like the kidney are used, and river sides are places of spiritual power in some cultures."

People wondered about deliberate poisoning; others noted the flat-out bizarre nature of the incident.

Frank Pace, a Burlington chef, butcher and outdoorsman, posted the suggestion I prefer to believe. He identified the organ by photograph as lamb or goat kidney and wrote, "Probably used to fish for the Asian carp that are running up the Winooski."

I went back to the river, without dogs, two days after Johnny ate the kidneys to ask anglers about their bait. I came upon a man digging for worms near a sandy clearing where people fish. He and a friend had their poles stuck in the mud, their lines in the river.

The man, a South Burlington resident named Ben Emerson, happened to be a meat cutter at Price Chopper. He told me some of his customers buy pork liver for catfish bait. "They think they're gonna catch a big one," Emerson said. I showed him a picture of the organ meat on my phone. He said he had a "gut feeling" it was fishing bait.

The next day, I called the Vermont Fish & Wildlife Department and spoke to Maj. George Scribner. He's a 26-year veteran of the department, including 17 years as a game warden. Scribner thought it unlikely that animal kidneys would be used for bait.

"My thought would be somebody dumped them there," he said. "They had them for whatever reason, [but] I would be surprised if it was fishing related."

Meantime, Johnny's OK. He bounced back faster than he did after eating cannabis edibles at Oakledge Park. That night, he could barely stagger to the car for a midnight trip to the veterinary emergency room.

We didn't feed Johnny supper the night he ate 13 kidneys. But I learned a butcher's recommendation for preparing the organ: Boil the piss out of it.