Why Vermont Nonprofits Lobby the Legislature That Funds Them 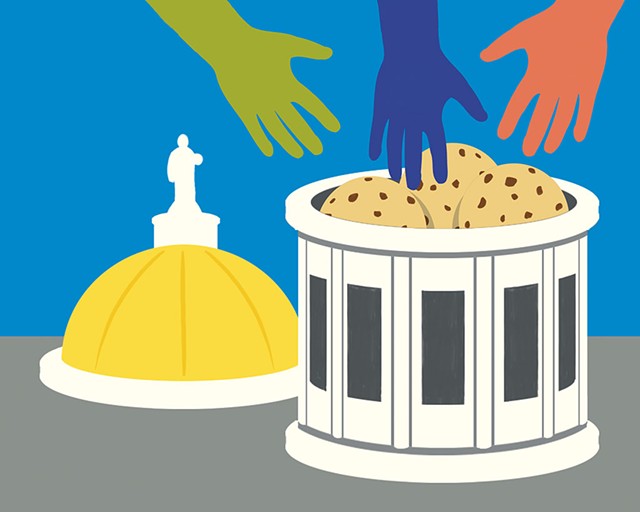 After struggling for a decade with rising costs and stagnant state funding, Vermont's 15 nonprofit parent-child centers came to a conclusion: It was time to hire a lobbyist to fight for more money.

"We decided we didn't have a choice," said Scott Johnson, who until recently led the Lamoille Family Center. "We needed to have boots on the ground under the [Statehouse] dome on a regular basis."

The independent centers support low-income families with a wide range of services, including parenting classes, childcare and home visits. A 1989 state law entitled them to government funding, and the state currently provides about $17 million of the centers' combined $24 million budget.

That's not as generous as it may seem, according to Rep. Dave Yacovone (D-Morrisville), a former commissioner of the Department for Children and Families. He described parent-child centers as "the orphans" of the state social services system — easily overlooked when lawmakers write a budget.

In this age of austerity, lobbying has become a necessary survival strategy for many nonprofits.

"I think, over the past several years, it's become more important for organizations to make the case that they are worth the investment," said Amy Shollenberger, whose lobbying firm, Action Circles, now represents the parent-child centers. Those centers aren't seeking dollars to start new programs, Shollenberger said. They're simply asking the state to cover the full costs of the services it already commissions.

Nonprofits are legally allowed to lobby, and they do plenty of it. In fact, the three highest individual spenders on lobbying during the 2018 Vermont legislative session were all nonprofits — and they shelled out significantly more than large, for-profit companies such as Entergy, Green Mountain Power and GlobalFoundries. Organizations lobby for a cause, funding or both.

Limits apply to nonprofits with a federal 501c3 status, which entitles them to the most generous tax benefits. They can lobby only as long as it isn't a "substantial" part of their activity. The Internal Revenue Service doesn't define "substantial" but does provide some guidance about staying below that threshold.

The top three spenders in Vermont have different IRS nonprofit designations that allow them to engage in unlimited lobbying: Vermont Public Interest Research Group, a 501c4 advocacy organization; Vermont State Employees' Association, a 501c5 labor union; and the Vermont Association of Hospitals and Health Systems, a 501c6 trade organization. Each spent more than $100,000 during the 2018 session. Adding nonprofit hospitals' individual lobbying expenses to that of VAHHS, they collectively spent $356,180.

Since 1990, the federal government has prohibited any organization it funds from using that money to lobby it. Vermont's lobbying law contains no comparable restriction, creating the potential for an incestuous cycle in which organizations use state money to lobby the state for more money.

Even nonprofits that are offshoots of state government — including Vermont Information Technology Leaders and the Vermont Student Assistance Corporation — lobby the state. The technology nonprofit retains a lobbying firm and spent $38,372 during the 2017-18 biennium, including $12,467 this year. VSAC, which has also hired a firm, spent $37,625 this year and $90,626 over the biennium.

Although predominantly state funded, both organizations say they do not use any state money for lobbying.

"Is it appropriate? It's in the eyes of the beholder," said Mike Smith, who helped create VITL when he was governor Jim Douglas' secretary of administration. He was hired earlier this year to lead the struggling organization, which has made slow progress on building a medical records database, despite spending millions on the effort. "I think that any organization has to look out for its own well-being in the legislature."

Hiring a firm rather than relying on staff to communicate with state officials "is the most effective and efficient method to monitor legislative action while at the same time have staff stay focused on our mission," Smith said.

VSAC, created by the legislature in 1965 as a public nonprofit agency, provides financial aid to Vermont students and gets more than $20 million from the state to do so. That appropriation has remained flat for the past 10 years, according to Tom Little, VSAC's vice president and general counsel.

"The State of Vermont has generally been underfunding or defunding higher education since the early 1980s," Little continued. "We've been losing ground mainly to things that appear at the time to the General Assembly to be more urgent."

Asked whether he thought an instrument of the state should be in the business of lobbying the state, Little responded, "I think it depends on the context of what they're actually lobbying or advocating for."

VSAC's mission, Little said, includes advocating for students, and "if we banned ourselves from going to the Statehouse, we'd be kind of falling short on the mission."

"I think it's healthy," said Rep. Yacovone, who lobbied for the hospital association earlier in his career. He made the case that nonprofits can freely communicate the needs of their clients, whereas state government employees may be constrained about what they can say, depending on the priorities of the sitting governor.

Yacovone said he's familiar with the argument against such an arrangement, which he paraphrased as, "Oh, my God, they're spending some of their precious grant money to hire a lobbyist." But in his view, "It's the cost of doing business."

The revolving door between the nonprofit and public sector is well trafficked.

A number of nonprofits employ former and current state officials. According to a Seven Days analysis of their financial disclosure reports, at least 22 legislators work for nonprofits, and at least 47 serve on nonprofit boards.

Sen. Richard Westman (R-Lamoille) sits on the Senate Appropriations Committee and is also manager of the Vermont Higher Education Investment Plan at VSAC.

"If I have an opinion on anything even remotely related to VSAC, I'm very clear to tell everyone that I work for VSAC," Westman said. But he doesn't see the need to recuse himself from those conversations because the state appropriation "has absolutely no effect on my salary."

Westman acknowledged that his presence, and connections, on the committee likely bring some benefits to VSAC. "Being able to offer straight information about what's going on with the populations we're trying to serve — that's got to be an advantage," he said. When VSAC helped organize a financial aid conference in Burlington several weeks ago, "I think I probably helped get Jane and Tim to show up," Westman said, referring to appropriations chair Sen. Jane Kitchel (D-Caledonia) and Senate President Pro Tempore Tim Ashe (D/P-Chittenden).

Rep. Barbara Rachelson (D-Burlington) is executive director of the Lund Center, a Burlington social services nonprofit that receives state funding. She's careful not to advocate for Lund causes during the session, Rachelson said, instead relying on Jeanne Kennedy, a longtime lobbyist who serves on Lund's board and does the job pro bono.

At the same time, Rachelson wishes more of her fellow lawmakers came from the nonprofit sector. She suggested that the state still provides some services that nonprofits could deliver more effectively only because the state employees union lobbies to keep them in-house.

She said she's considered organizing a nonprofit caucus — a group of lawmakers that could advocate for the organizations — but has held off out of concern that it might look like a conflict of interest.

For the parent-child centers, spending $57,500 on lobbying this biennium appears to have paid off. In fiscal year 2017, the centers' annual collective state appropriation grew by $190,000 — their first such increase in 10 years.

"Frequently, things go to the people who lobby the most effectively," Rachelson observed, noting that, unfortunately, one organization's victory in the fight for state funding can be another's loss.

Seven Days examined ethics disclosure forms submitted by candidates in advance of the looming election season and found that at least 22 of them are employed by nonprofits. (Candidates were required to disclose any sources of personal income totaling more than $5,000.) And at least 47 of them serve on nonprofit boards. Here are the lists:

Note: These lists do not include legislators who are not seeking reelection or those who had not submitted their disclosure forms by Tuesday.