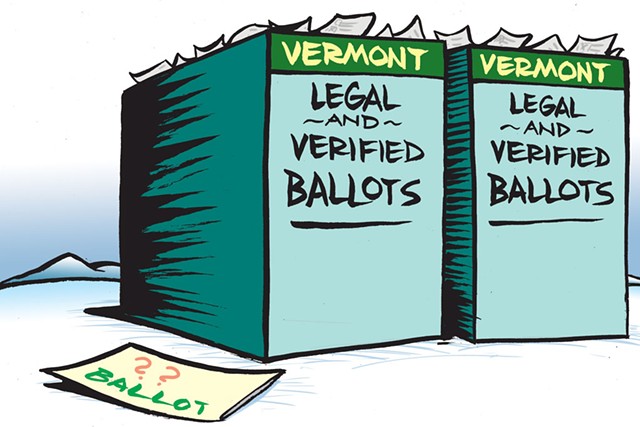 Two weeks after president Donald Trump's lies about a rigged election culminated in a deadly insurrection at the U.S. Capitol, Vermont's own pied piper of voter fraud, Ethan Allen Institute president Rob Roper, was still at it, trying to foment fears of rampant election crimes in the Green Mountains.

It's the same outlet that warned last June: "In towns on Vermont border, Massachusetts State Police watch for Antifa." The only "town" mentioned in the story was Pittsfield, Mass., which actually is a city, where the mayor had issued a memo saying there might be a stepped-up state police presence. That was in response to a claim that antifa forces might be spreading out from large cities to smaller places. Police later traced the bad info to a white supremacist group. And as for right-wing media's grasp on the facts, Pittsfield isn't on the Vermont border. It's 27 miles from it.

It turns out the "election fraud" on which "light" is being shed looks a lot like those antifa forces massing on Vermont's southern border last summer.

Republicans have been espousing for some time the theory that high voter turnouts help Democrats and lower ones help the GOP. Last March, a fascinating Washington Post analysis quoted Republican leaders in Pennsylvania and Wisconsin saying that new laws requiring voters to show photo IDs had improved the party's prospects by lowering electoral participation. The news hook for the Post story was an interview Trump had just given on "Fox & Friends" in which he talked about reducing funding sought by Democrats for mail-in voting amid the pandemic.

"The things they had in there were crazy," Trump said of the Democrats' stimulus proposal. "They had things — levels of voting that, if you ever agreed to it, you'd never have a Republican elected in this country again."

Meanwhile, the New York Times reported that fears that mail-in voting helps Democrats are bunk, according to a study by the Institute for Economic Policy Research at Stanford University. The study "concluded that mail balloting modestly increased voter turnout but that both parties benefited more or less equally from the surge," the Times said, adding that "Other academic studies have reached largely similar conclusions."

Vermont and other states pushed hard for mail-in voting to reduce or eliminate Election Day exposure to the coronavirus. In Vermont's general election, Republicans picked up three seats in the House and one in the Senate, and Republican Gov. Phil Scott coasted to reelection over Progressive/Democrat David Zuckerman.

Roper was a man on a mission last summer and fall, repeatedly issuing dire warnings on "Common Sense Radio," the show the Ethan Allen Institute pays my former employer, WDEV Radio, to air. He also made it a favorite theme in his writings that appeared in True North Reports, VTDigger.org, the Ethan Allen Institute newsletter and other publications.

"Election officials have too few and too weak tools for ensuring that the voter to whom 'one vote' is being attributed is actually the 'one person' who filled out the ballot," Roper wrote in an opinion piece that appeared on VTDigger. "Our Secretary of State Jim Condos has no safeguards in place to ensure one person one vote," he warned on WDEV.

Attorney General T.J. Donovan told Fair Game he got the handoff in seven cases connected with the November election, and exactly one was found "actionable," meaning worthy of prosecution. Donovan wouldn't provide details, saying the case is nearing resolution but isn't there yet. He described the perpetrator as a "provocateur" who was "trying to test the system" of mail-in voting — and got caught.

"If he has facts or evidence supporting his allegations, he should produce them." Attorney General T.J. Donovan tweet this

So there you have it: one case of attempted, but thwarted, election fraud out of a highest-ever total of about 374,000 ballots cast. For all of Roper's claims that there are no defenses against voter fraud, I can think of two. First, most people are decent and honest and are not yearning to lie and cheat in an election.

Second, for those who are tempted, every mail-in ballot requires a voter's signature under the words "I swear or affirm, under penalty of perjury" that the voter is a resident and on the checklist of the town or city in which they are casting a ballot and is not registering, requesting a ballot or voting anywhere else in the United States. Perjury is a felony with a potential 15-year prison term.

Those who break the law and get away with it get to bump a favored candidate up from, say, 187,376 votes to 187,377. With a risk-benefit ratio like that, can you see why voter fraud might be rare?

It looks like mail-in voting has a future in Vermont, at least through March. The legislature recently passed a measure allowing cities and towns to use mail-in balloting on Town Meeting Day, and it earmarked $2 million to help municipalities do so.

You'd think that after Vermont's stellar performance running the November election in the middle of a pandemic, and after baseless allegations of election fraud brought our nation to the brink of civil war, Roper would take a breather. But nope, he's back for more.

Roper's headline about the clerks shedding light was based on legislative hearings in which lawmakers reviewed how last year's elections went. His piece came days after he produced another missive, titled "Vermont director of elections testifies to how easy mail in ballot fraud is."

In the hearings, recordings of which are available on YouTube, elections director Will Senning, who testified before the Senate Government Operations Committee, and several town clerks who appeared before that panel's House counterpart, had three main points to make about voter fraud.

First: Defenses against voter fraud are weak, and clerks lack tools and training to block such fraud. Second: Systems meant to prevent it often end up denying legitimate voters their right to cast ballots. And third: There's really little to no voter fraud in Vermont.

Now here's where True North Reports and similar conservative organs diverge from journalism and become propaganda: All of the quotations Roper included in the pieces referred to the first of those three statements but not the other two. It's an age-old technique called out-of-context cherry-picking.

He quoted Barre City Clerk Carol Dawes: "There isn't any way in our current system that would preclude somebody making a request and then voting on behalf of someone who doesn't want to vote on that ... That is an opportunity that's out there." Roper left out some other things she said, including, "I'm afraid that if we try to find solutions to problems that don't really exist, like voter fraud, that we're going to disenfranchise some of our voters."

Roper twice quoted Montpelier City Clerk John Odum saying, "We can't necessarily stop" alleged fraudsters, but he failed to add that Odum also noted, "Right now, as I said, there is virtually no voter fraud. It is a tiny, tiny thing," or quote his comments that clerks would be the first to call for changes in Vermont's voting systems if fraud started to become a problem.

One thing I'd say in defense of the mainstream media and even "alternative" outlets such as Seven Days is that we try to get our facts right. Roper flubbed both Dawes' and Odum's titles, calling each a "town clerk." Montpelier and Barre — like Pittsfield, Mass. — are cities, and the mistake is even worse in Barre's case, because there's a separate municipality called Barre Town, with its own clerk-treasurer, Donna Kelty.

Both Donovan and Secretary of State Condos had the same basic question for Roper: Where's your proof? "If he has facts or evidence supporting his allegations, he should produce them," Donovan said.

When I relayed their question to him, Roper made clear he didn't want to answer it, accusing me in an email of "governmental malpractice" even though I've never worked in government.

"You want the argument to be 'show me evidence of voter fraud.' But the argument I am making and have been for some time is that we have a system in which voter fraud can't be detected if and when it occurs — where Clerks aren't trained to spot it, mechanisms don't exist to catch it especially where voting by mail is concerned, and our top election officials — and media folks like yourself — actively try to hide this fact from the public. This is governmental malpractice," he wrote.

There are other types of malpractice. There's the malpractice of organs such as True North Reports, which push a specific ideological agenda and call it "news." There's the political malpractice of ginning up fear and suspicion way beyond what's justified in a country that needs to calm down.

Condos called it "crying-wolf stuff. It's what created the environment [that led to] an attempted coup in Congress, at the Capitol. These tactics by opponents of voting rights are ... really not helpful to democracy," he said.

Two key staffers have departed VTDigger in recent weeks, following a tough year of long hours covering the news during a pandemic.

Cate Chant left last Friday, telling Fair Game she was going into "pretirement" but would continue editing audiobooks part time. Chant had been with VTDigger nine years, from its early days as a fledgling online news source to its current powerhouse status. She was essentially a copy desk chief but too modest to claim the title. She also wrangled commentaries.

Founder and editor Anne Galloway, who had worked with Chant at the Rutland Herald and the Barre-Montpelier Times Argus, called her remarkably dedicated. "I will sorely miss her," Galloway said.

Digger also lost Mark Johnson, a widely respected journalist and broadcaster who took a senior editor job there five years ago. His career has included stints as a Burlington Free Press reporter, co-owner of WDKR 107.3 Radio and talk-show host on WDEV Radio for 25 years.

Galloway said Johnson's mentoring had been "essential to reporters on our staff who, with his support, wrote game-changing stories, such as the series on the politics behind the F-35 fighter jet basing and sexual harassment at the Vermont National Guard."

Johnson told Fair Game he left his job last month to take a break after helping lead VTDigger's coverage of the pandemic and other news. Johnson, 60, said he hoped to return in some capacity to Vermont journalism, "though probably not 70-hour weeks."

Clarifications, January 27, 2021: Rob Roper said he does not write for True North Reports, though the publication reruns stories he writes for the Ethan Allen Institute. Further, the original version of this story misspelled John Odum's name.

The original print version of this article was headlined "Fraud Squad"