Why Is UVM's Water Tower Under Wraps? Plus, Fast-Talking Radio Ads 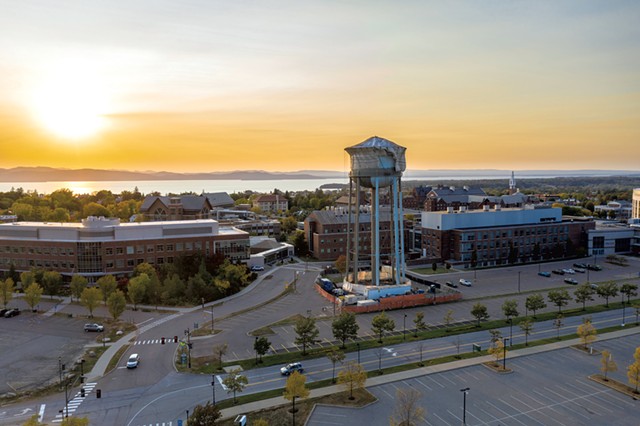 If you've been on or near the University of Vermont campus recently, you've probably noticed the large drapery covering the hilltop water tower. What's the reason for this condom-like sheath, and what hazards or annoyances is it protecting us from?

According to Robert Goulding, spokesperson for Burlington's Department of Public Works, the prophylactic measures are part of phase 2 of a rehabilitation project on the 500,000-gallon water storage tank. Begun in 2019, the project involves sandblasting away previous layers of paint, including the original primer put on the tank when it was built in 1954.

Because paint from the 1950s contained lead, which can cause health problems ranging from stomachaches and irritability to seizures, birth defects and death, this phase of the work requires that the tank be covered in a containment system called "cabling and tenting." A negative-pressure ventilation system whisks away lead dust.

This phase of the project was slated to begin on August 3, with sandblasting and subsequent repainting anticipated to take about a month, but Goulding said the work is behind schedule. Low temperatures and high winds could further delay the project's completion, perhaps until the winter.

"During phase 1 of the project, we heard from some residents about noise impacts related to the mechanical equipment staged at the base of the tank site," Goulding said. "We recognize more residents may be working from home currently. During phase 2, we are working with the contractor to implement cost-effective noise mitigation, such as the use of quieter equipment."

Tanks for the heads-up.

Andrew Pond of Burlington emailed us recently to ask about the impossible-to-read fine print that appears at the bottom of some television commercials, as well as about the fast-talking disclaimers tacked on the end of certain radio advertisements.

"I think the worst offenders are car dealerships on the radio and law firms on TV," Pond wrote. "WTF? How do they get away with this?"

"The disclaimers you hear in radio commercials and see as text on the TV screen are triggered by consumer truth-in-lending laws," explained Wendy Mays, executive director of the Vermont Association of Broadcasters, in an email. "Disclaimer rules vary by industry, but those that tend to have them include automotive, pharmaceutical and mortgage lenders/brokers. There are also sponsorship disclaimers that broadcasters air for paid programming."

Fair enough. But if you think such visual and verbal asterisks follow the letter of the law but not the spirit, you're not alone. In 2014, the Federal Trade Commission launched Operation Full Disclosure, which sent letters to more than 60 companies, including 20 of the country's biggest advertisers, warning them about deceptive and misleading advertising, regardless of their use of disclaimers.

Lesley Fair, a senior attorney with the FTC's Bureau of Consumer Protection, wrote an online primer for advertisers clarifying the FTC's "clear and conspicuous" rule for legal disclosures.

"Consumers shouldn't have to scan an ad with a magnifying glass to pick up on material details of the deal." Nor, Fair wrote, should they "have to be speed readers to grasp the message."

Fair dinged one advertiser for using an intricately embellished, all-caps font for its disclaimer. "That may be fine for the logo of a heavy metal band," she wrote, "but it's not a presentation designed to convey critical information to consumers."

So what are the FTC's requirements when it comes to disclaimers' font, point size, and time on-screen and over the airwaves?

"We get those questions all the time," Fair wrote in her primer. "A disclosure is considered 'clear and conspicuous' if consumers notice it, read it and understand it. Do you really want the FTC staff dictating the specifics of your ad campaign?" she asked rhetorically. "We didn't think so.

"If you find yourself struggling with how to craft an effective disclosure," she added, "why not take a step back and consider what the need for a disclosure may be telling you." Ouch!

In recent years, broadcasters have urged Congress and the relevant federal agencies to allow ads to include a web link instead, eliminating the need to jam verbiage into ads and making it easier for the public to read them at their leisure.

"However, like many areas of law, the government has not yet caught up with the technology," wrote Washington, D.C.-based Scott Flick, a communications lawyer and partner in the firm Pillsbury Winthrop Shaw Pittman, by email.

In Flick's view, such federal mandates are largely useless to consumers and deprive local broadcast stations of revenue that supports their news and other operations. As he put it, "It's hard to sell a 30-second radio spot [when] the advertiser knows it will have to fit its message into 15 seconds to leave time for the mandatory legal disclosures."

Yet the fast talk and fine print persist. There's even a disclaimer generator website where users can enter their company's info and get a disclaimer spat out in seconds. With no specific information about the business, disclaimergenerator.net concocted this one for Seven Days: "All the information on this website — sevendaysvt.com — is published in good faith and for general information purpose only. Seven Days does not make any warranties about the completeness, reliability and accuracy of this information."

If only it were that easy.