Why Is There More Train Activity on the Burlington Waterfront? | WTF | Seven Days | Vermont's Independent Voice

Why Is There More Train Activity on the Burlington Waterfront? 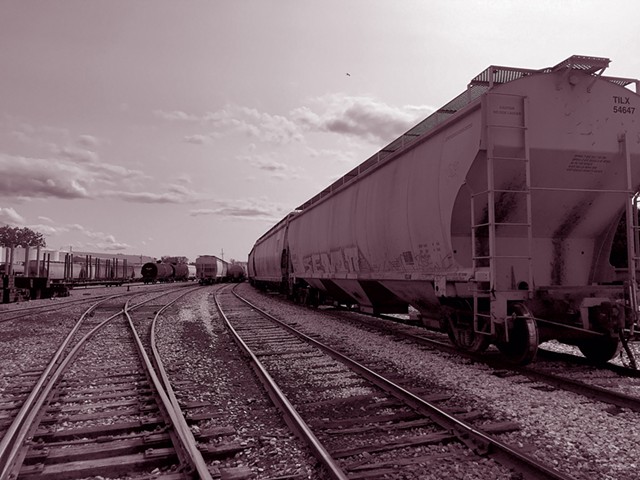 If you've heard more train whistles than usual blowing in Burlington in the last few months, you're definitely not alone. At least four Seven Days readers emailed us this summer to ask why there seemed to be heavier-than-normal rail traffic on the waterfront. Though three of the people who wrote in were merely curious, one Burlington woman sounded off about being awakened repeatedly by train horns at downtown crossings.

For some, the lonesome moan of a diesel locomotive invokes nostalgia for the golden age of railroading. For others, it makes them blow their stack. So if the sound of freight trains isn't your thing, there is a light at the end of the tunnel — once the tunnel is finished, that is.

Selden Houghton is president of Vermont Rail System, the parent company of five railroads in Vermont and New York. VRS operates more than 350 miles of track and hauls more than 25,000 freight cars each year. Many of those boxcars, tankers and hoppers reach the end of the line in the Burlington rail yard, transporting everything from road salt to home heating oil.

As Houghton explained, Burlingtonians would have noticed an uptick in rail activity starting on July 13, when the state closed its western corridor main line running north-south through Addison County. The 10-week closure has allowed the Vermont Agency of Transportation to replace two dilapidated, century-old train bridges in Middlebury with a new, 360-foot-long concrete tunnel running beneath the downtown.

The Middlebury Bridge & Rail Project, now in its third year, is part of a long-standing effort by the state to increase its freight capacity on that line, as the old train bridges didn't have enough vertical clearance to accommodate the modern, double-stack railcars.

The work is also being done to allow for the return of passenger rail service into Burlington. As Seven Days' Courtney Lamdin reported last November, the state was awarded a $10 million grant in 2015 to upgrade the rail lines between Rutland and Burlington, which will soon connect the Queen City to the Big Apple and points south. Starting in 2021, Amtrak's Ethan Allen Express, which currently ends in Rutland, will extend to its new terminus at Burlington's Union Station, with additional stops in Middlebury and Vergennes.

With the bridge and tunnel construction under way all summer in Middlebury, Houghton said that VRS has had to detour its freight trains in a circuitous path: Those headed southbound out of Burlington actually begin by going northeast through Essex, then east across the state, then south through Bellows Falls before heading northwest into Rutland. According to VTrans, the 10-week closure is chugging along right on schedule and is expected to wrap up by September 21. Once that tunnel opens, the train whistles should quiet down a bit.

Meanwhile, a new project is picking up steam on the Burlington waterfront. As Houghton explained, the bike path between King and College streets will close soon, as prep work begins on the new Amtrak station platform. There, the bike path will be shifted slightly to the west, eliminating the need for cyclists and pedestrians to cross the tracks twice. In the process, the rails will be shifted slightly to the east in order to accommodate the new bike path route and to straighten an existing curve in the tracks at King Street.

"The heavy lifting is going to start in 2021," Houghton added. "We hope to have the main line track in its new position before the ground freezes."

If the added train noise derailed any of your enjoyment of the lake this summer, Houghton pointed out that the volume of traffic would have been even heavier were it not for COVID-19. This is the first year in recent memory that the Green Mountain Railroad hasn't run any passenger service, including its popular dinner train out of Union Station.

Houghton declined to say how much freight service declined since the start of the pandemic, and because the railroads are regulated at the federal level, VTrans doesn't track those figures. But according to a June report from the management consulting firm McKinsey & Company, railroad freight volume nationwide is down 20 percent this year compared to what it was in 2019.

Some of the reasons behind that decline are obvious. As Houghton noted, much of the gasoline that's sold in Chittenden County comes in by rail before being picked up by distributors and trucked to local gas stations.

"Demand has changed. A lot more people are working from home, and there's a lot less tourism this year," he said. "It's definitely had a ripple effect on some of the freight traffic."

A "ripple effect"? As railroad metaphors go, that one doesn't quite make the grade.