Why is There a "Slash" in the Trees at the U.S.-Canada Border? | Tourism | Seven Days | Vermont's Independent Voice

Why is There a "Slash" in the Trees at the U.S.-Canada Border? 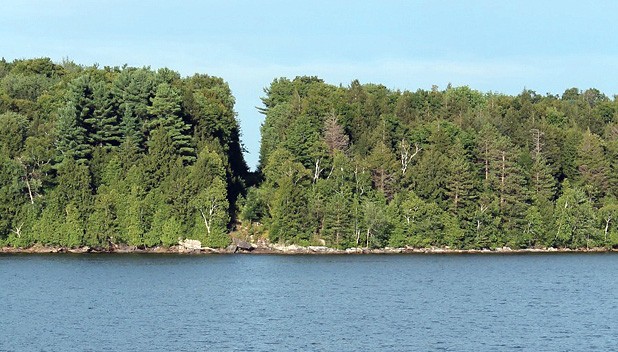 Perhaps you thought the border between the United States and Canada was a thoroughly invisible boundary line, something as theoretical and imaginary as the cordon between the Eastern and Central Standard time zones. Well, you would be wrong.

Thanks to the ongoing work of the International Boundary Commission, a visible line runs through 1349 miles of forested land along the 5525-mile border between the two amicable countries. It’s a narrow, clear-cut vista informally known as the “Slash.” In Vermont and New York, this northern border is based on another invisible line: the 45th Parallel.

Passengers aboard the Newport-based cruise boat Northern Star, which operates daily on Lake Memphremagog from late spring to late fall, are treated to unmistakable sightings of the line where the U.S. ends and Canada begins. As captains Chris Johansen and Andy Scott steer the boat north into Canadian waters, they encourage passengers to observe the 20-foot-wide bald strip coursing through the wooded land on both the port and starboard sides.

So whose chain saws do the work? Are they full of petrol or gas? Are the workers paid in loonies or greenbacks? How often do they maintain the Slash? And whose idea was it to create a no-trespass express lane straight through the boundary forests?

The IBC, a cooperative project composed of both Canadian and U.S. personnel, has two commissioners, one appointed by Canada’s Order-in-Council and one by the American president. Hipsley, who spoke by phone from his office in Montana, is referred to as the “acting” commissioner because he was not appointed by President Obama, who has yet to select a commissioner. When President George H.W. Bush’s appointed commissioner, David Longly Bernhardt, resigned in January 2009, Hipsley, the deputy commissioner since 2001, stepped into the role.

Hipsley has personally worked on every part of the boundary from the Atlantic to the Pacific to the Arctic Ocean, and has served as head of each of the three U.S. IBC field offices. In a calming drawl, he explained that the U.S. and Canadian divisions of the IBC both have their own staff, equipment and budget. The two groups meet once a year to divvy up their work.

Their 15-year management plan extends the entire length of the border, from Houlton, Maine, to Arctic Village, Alaska. While Alaska’s limited growing season dictates cutting its vista just once every 15 years, the vigorous forests of the East must be cut every five to six years. The Americans handle the north line from Houlton to Van Buren, Maine. But the north line running through Lake Memphremagog, forming the flat top of Vermont, is tackled by Canadians based in Ottawa, which is closer than the Maine office.

Manual labor crews of five to 10 people travel the line, the eastern workers typically staying in motels along the way. (In the isolated precincts out west, workers are more likely to camp.) By day, crews armed with maps and power tools inspect, maintain and reestablish the 20-foot-wide corridor that straddles 10 feet of American soil and 10 feet (three meters) of Canada’s. The last time our northern boundary met the shears of Canadian trimmers was in the summer of 2010, which means that, circa 2016, they will pass through again.

So what is the point, er, line of thinking behind this no-tree-left-behind zone?

“The purpose,” Hipsley explained genially, “is so the average person … knows they are on the border.”

That border, he noted, dates back to the 1783 Treaty of Paris, which established British Canada as separate from the colonies of the future United States. Later, a survey conducted from 1872 to 1874 laid out a definitive border. Over the years, about 20 other agreements, conventions and treaties have parceled out the property of Canada and the U.S. The IBC was established in 1908, when the 1874 boundary was so overgrown and its markers (called “monuments”) so decimated that it had to be carved out all over again.

Lest visitors think the 20-foot-wide endless lane they just discovered in the north woods is some kind of installation art or strange land-management practice, the IBC has placed 8000 monuments and reference points along it indicating the international border. “If you cross it and are caught, whether you intended to or not, you can be fined a substantial amount — so it’s important,” Hipsley warned.

The definitive course of our southern boundary with Mexico is overseen by a separate organization, the International Boundary and Water Commission, first established in 1889. When I asked Hipsley to compare his work with that of the other commission, he contended the two jobs aren’t as different as you might think. “It’s still important, because we [the U.S. and Canada] have different governments with different policies on farming and timber management.”

In any case, he noted, policing the flow of goods and people isn’t his job. “We’re not law enforcement — our job is just making sure people know where it’s at.”