Why Is There a House in the Middle of the Winooski River? | WTF | Seven Days | Vermont's Independent Voice

Why Is There a House in the Middle of the Winooski River? 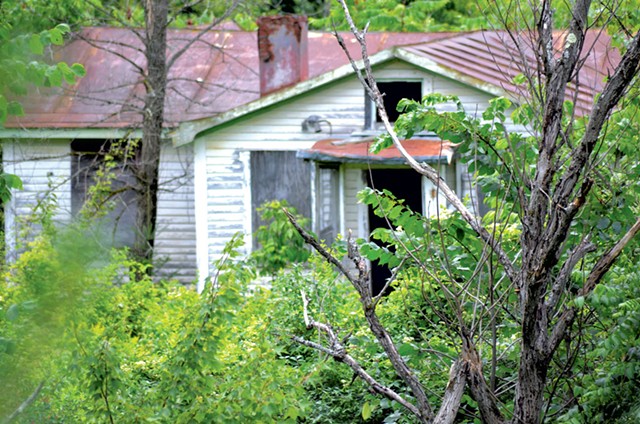 Regular visitors to Wrightsville Reservoir in Montpelier may have spotted a long-abandoned house situated in a most precarious location: on a tiny island in the North Branch of the Winooski River. The small white structure, with its corrugated metal roof and missing windows and doors, sits about a half mile downstream of Wrightsville Dam and hasn't been occupied in decades. Longtime Montpelier residents said they think it's been there at least a half century.

"I have driven by it a million times and always wondered, WTF?" wrote John Kerin in a recent email. Kerin, who's lived in and around Montpelier his entire life, recalled a footbridge leading to the island until the 1990s. "Who would build a little house in the middle of the river?" he asked.

Answer: a Swedish American widower who was born on Christmas Day. Here's how I found him.

First I checked out the terrain. The ramshackle house doesn't exactly catch the eye, especially at this time of year, surrounded by overgrown vegetation. To get a look, one must paddle the river or bushwhack through the steep riverbank along Elm Street, just south of Mill Road. I chose the latter.

The house is probably more visible from the eastern shore, but that's part of 54-plus acres of private property owned by Matthew Gannon of New York City, according to city records. Neither the current deed nor the property map references the island house. No one answered Gannon's listed phone in Montpelier, and no one was home when I stopped by his house, tucked in the woods on the river's east side.

Meg Walbridge, who's lived across the river on Mill Road since the early 1970s, said the island house has been there since she moved in; she's heard it survived the Great Flood of 1927. If true, that would be an impressive accomplishment. Wrightsville Dam, completed in 1935, was built in response to Vermont's worst natural disaster. The flood killed 84, including 55 in the Winooski River basin alone, and claimed countless buildings.

A visit to the Montpelier City Clerk's Office provided more answers. Deputy City Clerk Crystal Chase helped me navigate the city's labyrinthine land records, which are organized not by property location but by the names on the deeds. Soon I was combing the city database looking for the island's previous owners.

When I mentioned my quest to Aaron Fuller, who was researching wastewater permits on the computer terminal beside me, he knew immediately which house I was talking about.

"You mean 'the shack,'" said Fuller, who's fished the North Branch countless times. He remembered that building being used as an animal shelter but knew nothing else about its history. 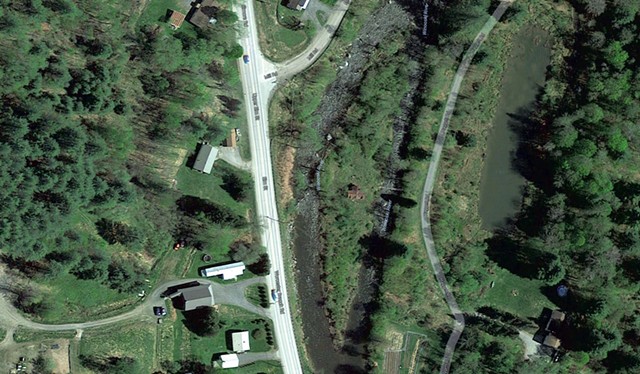 Because Montpelier's computer database only goes back to 1993, Chase and I were soon pawing though the city's old card catalogs, which are reminiscent of pre-digital-age libraries. The cards directed us to oversize ledgers containing century-old mortgage and deed records, some of which were recorded with fountain pens in calligraphic script.

Eventually, Chase located a deed dated April 17, 1929, which indicated that Myrtha Haggett of Montpelier had sold "a certain island in the North Branch" to Frederick Benson of Montpelier for $50. The deed refers to no house or structure on the island.

Coincidentally, that same ledger contained an IOU indicating that Benson had borrowed money from Chase's grandparents. She immediately called her father, Gary Lamell. The 71-year-old, who now lives in Middlesex, grew up on Portal Road in Montpelier, not far from the river. Lamell not only remembered the island cottage but knew the "Mr. Benson" who lived there.

"An old foreign gentleman. I almost think he was German," Lamell speculated in a subsequent phone interview. "He's the one that built it. Lived there quite a while."

Benson let his parents, who were dairy farmers, graze their cows on his land on the east side of the river, Lamell recalled. He related a boyhood memory of Benson using a cable car and rope-and-pulley system to haul himself to and from the island, which had no footbridge in those years. Lamell couldn't remember what Benson did for a living, only that Benson wasn't a farmer.

"I don't remember him having a job. Maybe he came over here with money," he said. "'Course, he lived kind of frugal."

Records from the 1930 U.S. Census confirm that a Frederick Benson, 51, lived in Montpelier that year. He was a widower, born in Minnesota in 1879, whose parents were from Sweden. Census records confirm that Benson didn't live on a farm and note that he could read and write. He may also have gone by the name Ivar F. Benson, a person who is recorded as having been born on December 25, 1879, and having died in April 1965. A later deed we discovered conveyed ownership of the island from the estate of Ivar Benson to the Central Vermont Humane Society on September 8, 1965.

Erika Holm, director of operations for the East Montpelier-based animal shelter, confirmed that the old house on the North Branch island was the Central Vermont Humane Society's original home 51 years ago. The shelter struggled financially in its early years, but by 1975 it had built more spacious quarters. After its move, the island cottage remained vacant and fell into disrepair.

As to why Benson built his house in the middle of a river that had claimed the lives of 55 Vermonters just two years earlier, one can only speculate. Perhaps the man born on Christmas Day was a lifelong optimist.