Why Is the Lord's Prayer Inscribed on a Rock in Bristol? | WTF | Seven Days | Vermont's Independent Voice

Why Is the Lord's Prayer Inscribed on a Rock in Bristol? 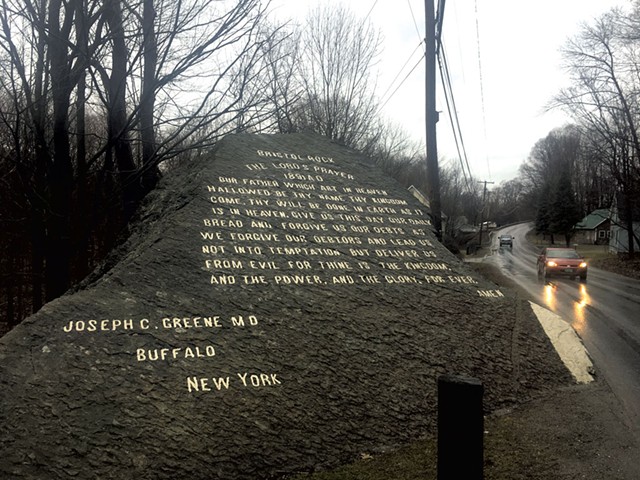 Vermont is full of rocks: glacial rocks stubbornly thrusting up in fields; smooth, white-scarred lake stones; and, of course, verdant, boulder-laden mountains. One Seven Days reader queried us about a particular rock in Bristol — something along the lines of "WTF is up with that big rock with the Lord's Prayer on it?"

To find out, I made my way to the Addison County town. "Bristol Rock," as the triangular slab is imaginatively called, juts out nearly into Route 116 just east of downtown. Chiseled into the stone and highlighted with white paint is an inscription of the Lord's Prayer: "Our Father, who art in heaven, hallowed be thy name," and so forth.

Appended to the prayer are the name and hometown of the man who commissioned the inscription, Joseph C. Greene, MD of Buffalo, N.Y., and the date "1891 A.D." (lest anyone think the engraver predicted the biblical verses prior to the birth of Jesus). 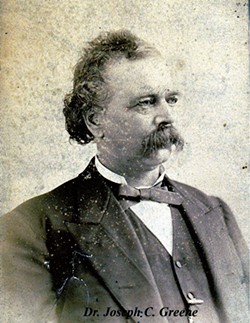 As I attempted to photograph the rock, its angles glistening in the afternoon rain, I couldn't help but feel annoyed at Greene for putting such a photo-friendly object next to a narrow, curving road. Photographers must pose a serious hazard to cars whizzing around the turn. Granted, Greene couldn't have predicted the speeds of modern vehicles, much less the advent of smartphones and the digital revolution. In his day, people drove horse carts.

I wasn't alone in my safety concerns. The entry for "Lord's Prayer Rock" on the Roadside America website ends with a warning: "Snap with extreme caution — accidents have occurred there. Maybe it is an onramp to heaven."

Apart from that darkly humorous tidbit, Roadside America — which details curious artifacts and locations around the country — offers two possible accounts of the origin of the rock.

The first is that Greene, a physician, also delivered logs to the Bristol saw mill. The journey over bridges and winding roads was a difficult one, and when he reached the large rock, he knew he was safe. So he paid someone to engrave the prayer there in thanks to the Christian deity for his well-being.

The alternative version is that Greene was incensed by the constant cursing of other men driving logging carts. So he had the prayer chiseled into the stone to make them think twice before taking the Lord's name in vain.

Hoping to pinpoint the correct version, I consulted employees in the town offices. They directed my quest toward two members of the Bristol Historical Society: Gerald Heffernan and Reg Dearborn.

As it turns out, Dearborn recently completed a study of the stone's origins that was published in the Burlington Free Press. He drew on a variety of resources, including Vermont newspapers of the era such as the Bristol Herald and the Barre Daily Times.

Dearborn's account begins by painting a picture of Greene, who was born in Lincoln in 1829 to Quaker parents. He went on to become a physician, attending Albany Medical College and practicing in Charlotte for seven years. 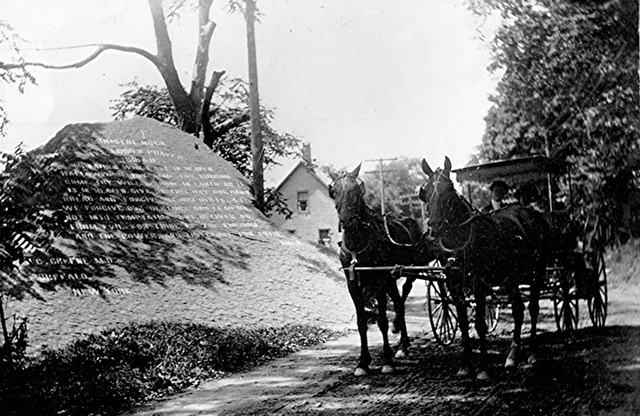 Although he eventually moved to Buffalo, Greene sometimes spent summers in South Starksboro, where his family had owned a farm since his youth. On one such occasion, in 1891, he contracted with two men — paying them $45 each — to carve the prayer into the rock. Dearborn writes, "It was reported the stone was so hard that several chisels were broken and they finally had to make special tools in order to complete the job."

As for motive, Dearborn offers up the same two anecdotes that appear on Roadside America, with a few distinctions and clarifications. The amateur historian writes that Greene hauled logs "as a young Quaker boy" [my italics], which clears up the confusion as to why a doctor in his sixties would have a side job transporting lumber. The young Greene:

drove heavy loads of logs along the Nine Bridge Road to the mill in Bristol. It was a hazardous trip because at every bridge the logs might roll off the wagon.

So, when the boy passed the huge boulder at the base of the hill coming into Bristol village, he offered a silent prayer in thanks because he had completed the most dangerous part of his trip.

Dearborn reasons that Greene carved the prayer later in life in memory of the internal devotions he offered as a child. As for the swearing theory, Dearborn attributes the loggers' profanities to the state of the road, which would become slippery with melting ice in the wintertime sun.

While Dearborn admits that both theories are plausible, he says that Greene's daughter, Juliet Greene Willard, gave credence to the first in a 1963 interview with the Buffalo Evening News.

In a phone interview, Heffernan adds that Greene likely hauled logs for the Bristol Manufacturing Company, which made coffins from 1869 to 1939.

So, while Greene may have offered thanks for his safe passage in his youth, forty years later, loggers on that same route were supplying wood for coffins. No wonder the rock still inspires morbid thoughts in some observers today.