WTF: Why Is That House by the Winooski Bridge Jacked Up? | WTF | Seven Days | Vermont's Independent Voice

WTF: Why Is That House by the Winooski Bridge Jacked Up? 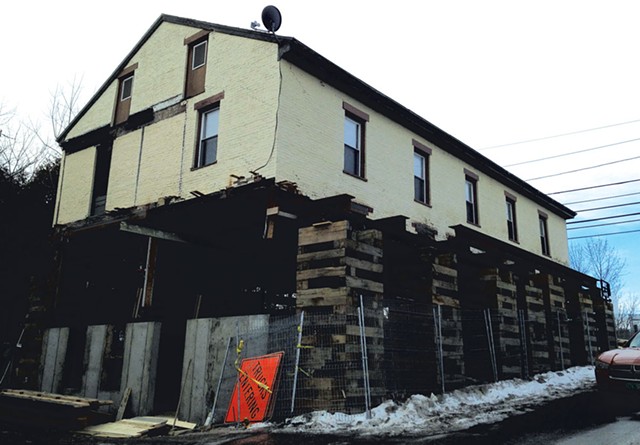 Travelers who frequent the bridge between Burlington and Winooski have likely noticed the yellow brick house at the southeast corner of Colchester Avenue and Mill Street on the Burlington side. Though the house is small and nondescript, lately it's been hard to miss. Since December, it's been perched on iron beams 20 feet in the air. WTF, and why is it up there?

In short, because for nearly 90 years, half of the structure has been buried underground. Its current owner, Randall Brisson, claims that this house at 495 Colchester Avenue is one of the oldest industrial buildings in Burlington, if not the oldest.

How old? That's anyone's guess. Scott Gustin, in Burlington's Department of Planning and Zoning, suggests the house was built "prior to 1822." However, data from the University of Vermont's Historic Burlington Project put its construction date between 1841 and 1846.

"I would more likely believe 1840," says Brisson, owner of Brisson Restoration in Shoreham. A specialist in refurbishing historic structures, he believes in saving old buildings rather than demolishing them, calling them "part of the fabric" of the community.

"It's also really green," he says of refurbishing, "because every pound [of debris] that I don't throw away is one that we don't have to replace."

Brisson's house is part of the riverfront neighborhood now designated as the Winooski Falls Mill Historic District. The Historic Burlington Project indicates that over the years the building has served as a grocery, a blacksmith and wheelwright shop, and a secondhand store.

Evidently, it's had other uses as well. Stephen Boyajian of Essex Center reports that, in the years before World War I, the cellar housed a pool hall that was frequented by cavalry soldiers from nearby Fort Ethan Allen.

Boyajian, who's visited the construction site at least once a week since work began late last year, has a keen personal interest in the project. The 82-year-old was born and raised in that house, along with his 76-year-old sister and their now-deceased older brother.

Boyajian's parents fled the Armenian genocide. His mother, who was orphaned at age 12 and saw her mother killed by Turkish soldiers, was taken to Aleppo, Syria, by Christian missionaries and raised by nuns.

Boyajian's father initially settled in the Boston area, then heard there was work in the Winooski mills — where he eventually found a job making army blankets and clothing fabric. He later traveled to Cuba to marry his wife and brought her back to Vermont.

Stephen Boyajian and his sister aren't sure when their father bought the Colchester Avenue house, but they believe it was around 1920. When the great flood of 1927 washed out the bridge across the Winooski River, the city replaced it with a much taller one. That required raising the grade of the roadway and sidewalk, nearly to the height of the Boyajians' second floor. To accommodate the new roadway, the workers filled in the first floor of the house with dirt, essentially burying its former commercial space. 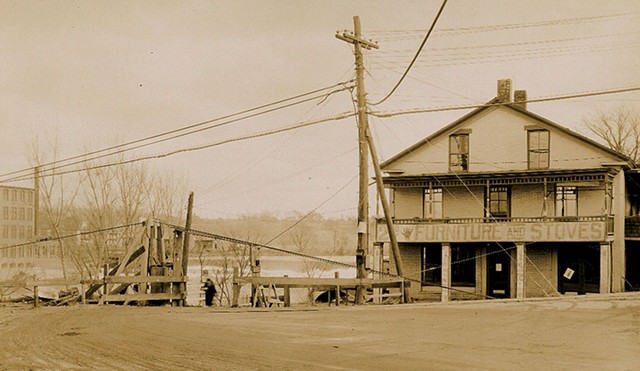 Stephen Boyajian, who was born in 1933, lived in that house until shortly after his return from the Korean War in 1954. He and his sister finally sold it in 1986.

By the time Brisson bought the building in 2008, it consisted of four "pretty basic" apartments that hadn't been well maintained, he says. Still, he recognized its solid post-and-beam construction and noted that other historic structures in the neighborhood had already been renovated. Those include the Chace Mill and the house immediately adjacent to Brisson's on Mill Street, which belongs to artists Gregg Blasdel and Jennifer Koch. Their house, once a livery stable, is now a B&B called the Dubuque Lane Guest House.

Why was it necessary to raise the house? According to Brisson, decades underground had rotted many of its support beams. In December, he jacked the building up 20 feet to pour a new concrete foundation and replace many of those beams. In the basement, a visitor can see where the old sewer line ran through what was once a first-floor window. When the building is eventually lowered onto its new foundation, it will also be reoriented to its pre-1927 position.

"I've seen the architectural drawings of the finished work," Blasdel notes. "It's going to be beautiful."

Brisson thinks so, too. As he explains, the "new" building will feature a historically accurate stone and brick façade — his crew salvaged 4,000 bricks from the original structure. It will include four rental units upstairs and 2,000 square feet of new commercial space at street level, which Brisson hopes will be used for a café or coffeehouse.

And, in keeping with the house's original materials, Brisson is using traditional post-and-beam construction throughout the renovation.

"Plywood and stick construction is good for essentially the life of the mortgage and a little bit more, before major renovations are needed," he explains. "We're building for a potential 300, 400 or 500 years. I think that's a better use of materials."

What does Boyajian think of Brisson's project so far?

"Oh, God, I'm so impressed with it," he says. "I think it is absolutely great. There's a lot of history in there."