Why Is Japan's Most Popular Curry Called Vermont Curry? 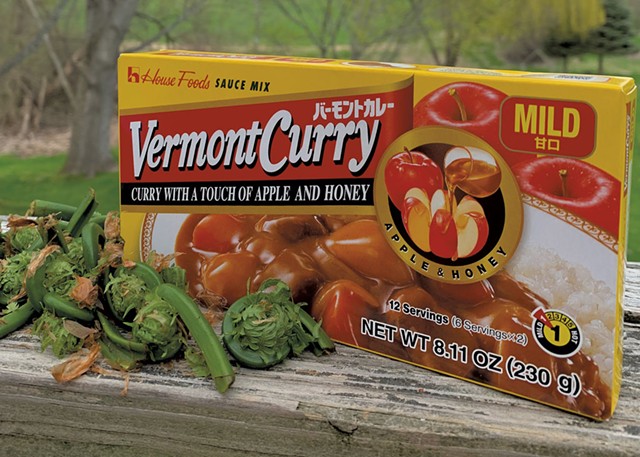 It means something for a food product to carry the Vermont label, be it one of our award-winning stinky cheeses, our cult-worshipped craft beer or that liquid-gold bonanza, maple syrup. The "Vermont" designation has become such a brand unto itself, bespeaking a heightened degree of artisanship, quality and care, that the state has even made rules to regulate its use in the marketing of certain products.

While grade A maple syrup and hopped-up double IPAs flow like rivers in the Green Mountains, curry most decidedly does not. Yet, according to a spokesperson from House Foods, the Tokyo company that manufactures Vermont Curry, it's the most popular curry roux brand in Japan. Vermont Curry is also available throughout North America, including at several stores in its namesake state.

So, we asked, what the fork is Vermont Curry? How did it come to be named after Vermont? And, perhaps most critically, is it any good?

To answer the first question, we turned to House Foods, which offered Seven Days the following explanation:

Curry was originally a spicy dish that was only suitable for adults' palate. We wanted to create a version that children could enjoy too, thus the creation for House Vermont Curry was born. House Vermont Curry is a mild roux that preserves the distinctive flavor, aroma, and color of curry, while dialing back the spiciness that makes it unsuitable for children.

Fair enough. But why Vermont? The tagline on the curry's packaging offers a clue: "Curry with a touch of apple and honey." According to House Foods, the "Vermont" in Vermont Curry can be traced back to a 1958 book called Folk Medicine: A Vermont Doctor's Guide to Good Health, by now-deceased Barre doctor D.C. Jarvis.

Investigation reveals that the good doctor's tome spent two full years on the New York Times best-seller list, selling more than a million copies. In the book, Jarvis asserted that "honegar," a mixture of honey and apple cider vinegar, was a miracle cure-all that could combat everything from arthritis to diabetes to heart disease. 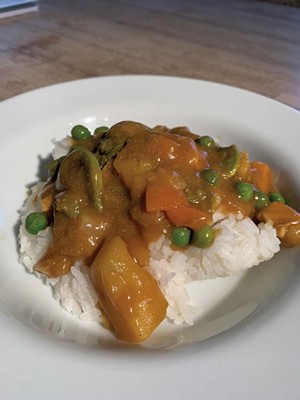 "I don't know if anybody ever sued him for malpractice, but that was pretty soundly debunked eventually," said Bill Mares of Jarvis' honegar theory. Mares, a local beekeeper and author, writes about Jarvis in his own forthcoming book with Ross Conrad, The Land of Milk & Honey: A History of Beekeeping in Vermont. He notes that, while few still subscribe to Jarvis' more outlandish claims, the honey and vinegar combination remains a popular remedy for lesser ailments in homeopathic medicine.

"Some people might believe he was a fake or a charlatan," said Mares of Jarvis, "but he did have quite a reputation as a folk doctor."

Indeed. Following Jarvis' death in 1966, his Barre office was dismantled and reassembled at the Shelburne Museum, where it is still displayed as an apothecary and physician's office. More germane to our question, the health fad sparked by Jarvis' book eventually made its way to Japan, where, according to the House Foods rep, it became known as the "Vermont Health System." And so, in 1963, Vermont Curry was born as an effort to capitalize on that craze.

These days, health nuts may want to look elsewhere for their fortifying curry fix. Vermont Curry bears a nearly inscrutable ingredient list that occupies roughly half of the box's back panel and includes all sorts of additives that would give your naturopath fits — MSG, anyone? But here's the $5.33 question: Does Vermont Curry taste good?

To find out, we tracked down the roux at Sakura Sushi & Kitchen, a Japanese restaurant at Taft Corners in Williston. (The product is reportedly also available at several other Asian markets in greater Burlington.) A counter person informed us that not only does Sakura sell a lot of Vermont Curry from its small retail shelf, but the restaurant uses both the mild and spicy varieties in its own curry dishes.

For Sunday dinner that weekend, my girlfriend's family and I prepared the roux at her parents' house in Charlotte, following the somewhat vague instructions on the box. For example, the recipe calls for one pound of "meat," so we used organic chicken and added carrots and peas to the prescribed potatoes and onions. To Vermont it up even further, we tossed in freshly foraged fiddleheads from our hosts' land.

After about 30 minutes at a low simmer, the thick, brown, aromatic curry was ready, and we ladled it over rice. My girlfriend's mother paused and assessed her first bite.

It was. As advertised, Vermont Curry is mild and imparts the lightest tastes of apple and honey. With apologies to Dr. Jarvis, I can't say it did much to assuage my girlfriend's bout of springtime allergies or soothe her mother's bum knee. But at the very least it cured our hunger, and our curiosity.