Why Is It OK to Feed Birds But Not Other Wildlife? | WTF | Seven Days | Vermont's Independent Voice

Why Is It OK to Feed Birds But Not Other Wildlife? 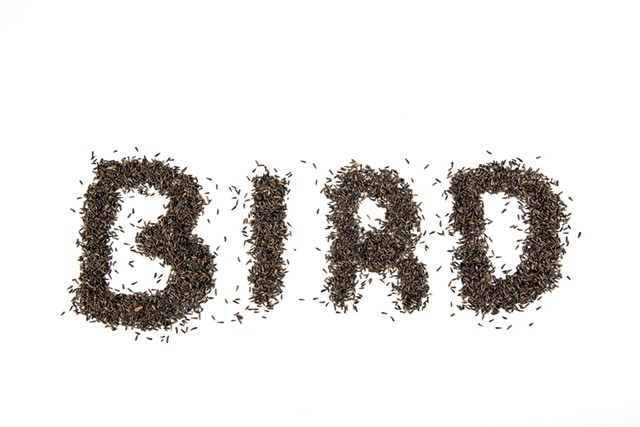 Years ago, before becoming a journalist, I worked for the Center for Wildlife Information, a Missoula, Mont.-based nonprofit. The organization's mission is to reduce human/wildlife conflicts, many of which require that the "nuisance" animal be relocated or destroyed. Most often, however, the nuisance animals are humans themselves, whose behaviors — such as improperly storing food while camping, approaching too close to wildlife, or attempting to touch, feed or interact with the critters — trigger the conflict.

For a time, CWI circulated bumper stickers and posters that read, "A fed bear is a dead bear." That conservation message still holds true for nearly all forms of wildlife except one: songbirds.

For much of the year, Vermonters fill their backyard bird feeders with sunflowers, peanuts, flax and millet in order to attract the cute and colorful chirpers. Feeding wild birds is such a popular pastime — about 40 percent of Americans do it, according to the National Audubon Society — that the $6.3 billion-a-year market for feeders and seeds has its own trade association: the Wild Bird Feeding Industry.

No one would ever think of setting out platters of tuna sandwiches to attract raccoons or bowls of chicken nuggets to watch foxes. Similarly, wildlife biologists generally frown upon feeding aquatic birds such as ducks, because it spreads disease, and seagulls, because they become aggressive and leave messes. Likewise, for similar reasons, baiting bear, deer and turkey is illegal in Vermont in order to protect those species. Yet, for some reason, songbirds enjoy a free lunch. Why?

In short, it's all about their behavior and size. Due to songbirds' natural feeding habits and diminutive dimensions, they're far less likely than large mammals to create hassles or threats to humans and their property. Unlike a bear, a blue jay won't claw open your kitchen door at the slightest whiff of suet.

So says John Buck, a wildlife and migratory birds biologist with the Vermont Fish & Wildlife Department. Buck directs the recovery of the state's threatened and endangered bird species such as the bald eagle, grasshopper sparrow, whip-poor-will, spruce grouse and black tern. He explains that, although songbirds may become habituated to bird feeders, typically they're feeding elsewhere in their habitat, too. That means they aren't completely dependent on feeders, and the impact on the landscape isn't severe.

"Bears, turkey and whitetail deer, just because of their size, create a bigger problem to address" when they congregate in large numbers, Buck says. "If you get 10 or 15 deer hanging around a feeding site in your backyard, especially in a neighborhood setting, those deer are also feeding on ... everyone's prize flowers and shrubs."

Buck recommends that Vermonters feed birds only during wintry weather — generally, December 1 until April 15 — in order to avoid attracting bears. A good rule of thumb is that if there's consistent snow on the ground and temperatures are at or below freezing, feeders are fine. Once the weather warms up in spring, however, Buck suggests putting the feeders away.

Bird enthusiasts shouldn't feel guilty when they stop feeding feathered friends in spring, he adds. At that time, birds are courting, nesting and rearing their young, and they typically feed on naturally available bounty.

When the feeders get put away, he likens it to an apple tree that stops producing fruit. "When the last apple is eaten, it's gone, and there won't be any more until next year," he says. "Animals just move on to another [feeding] location."

However, Buck cautions that feeders aren't entirely without health risks to songbirds. Because feeders cluster unlikely species together more closely than they otherwise would in nature, they can create an ideal environment for parasites and pathogens to spread. FWD recommends that people clean out their feeders several times each year, and between seasons, with a 10 percent non-chlorinated bleach solution. Hummingbird feeders should be cleaned even more often — about every two or three days.

The National Audubon Society offers other advice for keeping songbirds healthy and safe. The group recommends that people store birdseed in secure metal containers so it doesn't get damp and ferment, which can sicken birds.

Bird enthusiasts should also give forethought to birds' flight paths before putting up feeders. According to the National Audubon Society, approximately 1 billion birds die each year from flying into windows. The Humane Society of the United States recommends placing feeders at least 30 feet away from windows or within three feet of one. A feeder very close to a window prevents birds from building up too much momentum as they approach it, reducing the likelihood of fatal collisions.

Far more deadly to Tweety, though, is Sylvester the housecat. Domestic felines kill hundreds of millions of birds annually in the United States alone. The American Bird Conservancy puts that estimate closer to 2.4 billion annually and calculates that outdoor domestic cats have driven at least 33 bird species to extinction worldwide.

In short, Buck says, Vermonters should feel fine about enjoying nature's tweets, provided they do so responsibly. As he puts it, "Feeding birds just provides an attraction and allows us to get a close-up view of them, which is wonderful."