Why Is Food Sitting Outside Sabai Sabai? 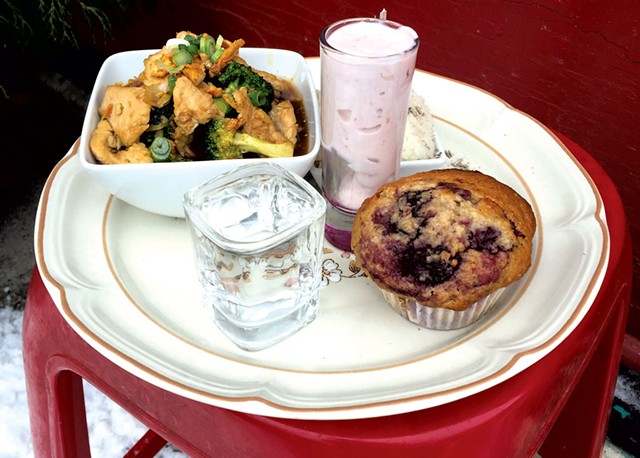 Every morning a plate of hot food mysteriously appears on a red stool outside Sabai Sabai Thai Cuisine in Middlebury. At first glance, it looks like an attempt to advertise the restaurant's offerings, tempting passersby with the aromas of lemongrass and chile.

But the plate appears before Sabai Sabai opens for lunch. And some of the food looks like it came from another eatery. Sure, there's a bowl of curry and rice. But there's also a shot glass of water, a plump blueberry muffin, some kind of creamy dessert and a stick of burning incense.

WTF? Does the chef prepare this meal every day for someone in particular?

Actually, yes. But it's no one you've seen around Middlebury.

"It's an offering to the house spirit," says Sabai Sabai owner Naphatsnun Sinpaksawat, or "Tip," as regular customers know her. She's been placing a full meal on the sidewalk daily since the restaurant opened more than four years ago.

The ritual is ubiquitous in Thailand, where Sinpaksawat spent the first 35 years of her life. Most businesses there, not just restaurants, put out oranges or tea every day, she says. The practice has Buddhist and Hindu roots but is now more of a cultural tradition than a religious one. Its main function is to express gratitude, to say, "'Thank you for getting me through this day; thank you for bringing good things; thank you for blessing us,'" she says.

When Sinpaksawat's kitchen staffers — including her husband, the head chef — arrive in the morning, they decide what to cook for the offering. Usually it's something simple to whip up, such as a curry or stir-fry. On a few special occasions, Sinpaksawat has convinced them to prepare sushi for the house spirit, she says.

The dishwasher picks up a muffin from a nearby bakery to add to the spread, and a glass is filled with water. At about 11 a.m., Sinpaksawat brings the meal out to the sidewalk, places it on a stool and lights the incense. Then she goes inside to get ready to open for lunch.

People often ask about the meal, says Sinpaksawat, but no one has ever run off with it — except for a dog that snatched the muffin one morning. "We don't mind," she says, "because if the dog gets it, it's not guilty; nothing's lost." The offering has already been made, she stresses: "Just like when you give something to people, you don't need to worry about what they do with the thing you gave them. It's gone. It's fine. It's about giving."

When the incense has burned out, Sinpaksawat pours the water on the sidewalk, a ritual borrowed from Indian culture, she says: "We do believe everything in the world has a mother, mother of the land, mother of water." Pouring the water out is how she expresses thanks to "mother water."

Then she brings the meal back into the kitchen. In Thailand, Sinpaksawat says, once you make an offering, you give the food away. She gives it to her kitchen staff. "Mostly the muffin," she says with a smile. "They like to have it with their coffee."

Sinpaksawat grew up in Bangkok — "a city girl," she says. As a young woman she learned English while working for the American company Honeywell, which led to a career in marketing for hotels and restaurants. In 2008, she immigrated to California but found the cost of living too high. So she moved to Montpelier, where she knew the owners of Royal Orchid Thai Restaurant. While working for them as a server, she met her husband there.

After Sinpaksawat found out she was pregnant, she and her husband moved to Florida. But when they visited their Royal Orchid friends a year later, they learned about an opportunity to become co-owners of a new Thai restaurant in Middlebury. They opened Sabai Sabai when their son, Tiger, was barely more than a year old.

"I started at the bottom," Sinpaksawat says proudly of becoming a restaurateur.

She emphasizes that it's not enough to put out an offering each day and expect good things in return. "You have to do good, too," she says. "You have to be hardworking, be honest with the customer. This [offering] is to support your mind, support your thoughts and say thank you."

Sinpaksawat says she thanks many people, not just the house spirit, when she puts out the morning meal. Her friends at the Royal Orchid, for example. "They taught me everything," she says. "They are why I'm here." She's also expressing gratitude to her mother, who is helping to raise Tiger, now 5. "We do this because of him," says Sinpaksawat.