Why Have Two Historic Vergennes Buildings Sat Empty for Decades? 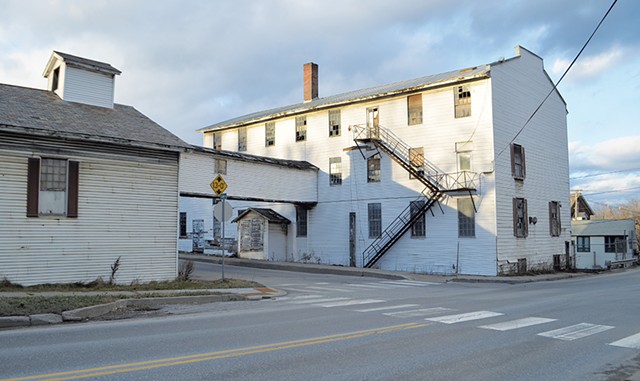 On the southwest side of Vergennes, at the intersection of Main and Canal streets, stand two white, industrial-looking buildings from the 19th century that have been vacant for decades. One need not be a developer to see that they're prime real estate opportunities in Vermont's smallest city.

Located along heavily traveled Route 22A and overlooking scenic Otter Creek and Vergennes Falls Park, the buildings are connected by a second-story skywalk across Canal Street. Though the site has clear redevelopment potential as housing, retail or office space — easy accessibility, beautiful views, walking distance to downtown — the structures sit empty and run-down, with broken windows and peeling paint.

Currently, Vergennes appears to be on the verge of a housing boom. The city is one of Vermont's 25 federally designated opportunity zones, with projects in the works to add at least 50 senior housing units. And considering that a similar historic structure at the north end of town — the Kennedy Brothers factory — has already been successfully rehabbed and repurposed, why have these two buildings remained shuttered for so long?

In a word, economics. Redeveloping historic buildings is costly, and the return on investment is anything but guaranteed, particularly on a site with so many moving parts.

At least, that's Matthew Chabot's assessment. He's operations manager with Burchfield Management of Vergennes, which has been trying to redevelop the buildings for years. Though several previous efforts failed, a new one appears to be making progress, despite appearances to the contrary.

Some background: The three-story Haviland Shade Roller Mill and its one-story Annex, which are both listed on the National Register of Historic Places, were built in the late 1880s. According to a June 2019 environmental corrective action plan prepared by Waterbury-based engineering firm Weston & Sampson, the larger, riverside building went up on the site of a grist mill dating back to at least 1878.

The larger building was occupied by the Nevins & Haviland Shade Roller Company, which manufactured window coverings there from about 1885 until 1926. According to the engineering report, the building's layout appeared to have changed sometime between 1892 and 1910, possibly due to fires that destroyed parts of it.

In or around 1926, the report continues, the property was purchased by the Vermont Hydroelectric Company — which eventually became part of Green Mountain Power — and was used primarily for storage. Weston & Sampson engineers also determined that portions of the site were later leased to nearby airplane parts manufacturer Goodrich Aerospace (formerly Simmonds Precision), which used the structures for manufacturing jet fuel regulators until 1999.

In 2004, Green Mountain Power sold both buildings to prominent Vergennes property owner and Burchfield Management president David Shlansky and his firm, Shenandoah, which has owned them ever since.

Fifteen years later, why haven't these buildings been redeveloped? The Vermont Department of Environmental Conservation designated the 1.5-acre property a brownfield site due to contamination from its numerous industrial uses over the years. According to the Weston & Sampson report, the contaminants include a veritable alphabet soup of noxious nastiness: trichloroethylene, perchloroethylene, semi-volatile organic compounds and polychlorinated biphenyls, as well as heavy metals including mercury.

Federal litigation over who was responsible for the cleanup was concluded in 2012. Nevertheless, making the site safe and habitable for humans won't be quick, cheap or easy. As Chabot explained via email, the project's $3.45 million budget is only a "rough estimate," and large historic rehabs like this one can easily run over budget by as much as 20 percent. Still, remediation is "on deck" for the next few months, he said.

"The tax credits are necessary, every dollar. Even with them," he added, "it is far from a layup."

Assuming Burchfield Management can make the numbers work, Chabot explained, the company plans to create a total of 23 housing units: 19 in the main building, which is roughly 16,000 square feet, and another four in the annex, which is 3,000 square feet. They would range in size from studios to two-bedroom apartments.

"We want to make these units very high quality," Chabot wrote, "and that means spending money."

Publicly filed documents estimate that the project will be complete in October 2020. Chabot, who's also Vergennes' outgoing city manager, admitted that a fall completion date is "aspirational, but there is a lot of aspirational thinking required on this project!"

Nevertheless, this project has progressed further than any previous plan for the site, and all of the major permits are in place. By this time next year, new occupants could be vying for waterfront views.

But they shouldn't bank on direct access to the falls; the developers deemed it too dangerous. On the upside, the plan preserves the skywalk across Canal Street. If the developers added a coffee shop to the Annex, residents could get a morning cup of joe without taking off their slippers.